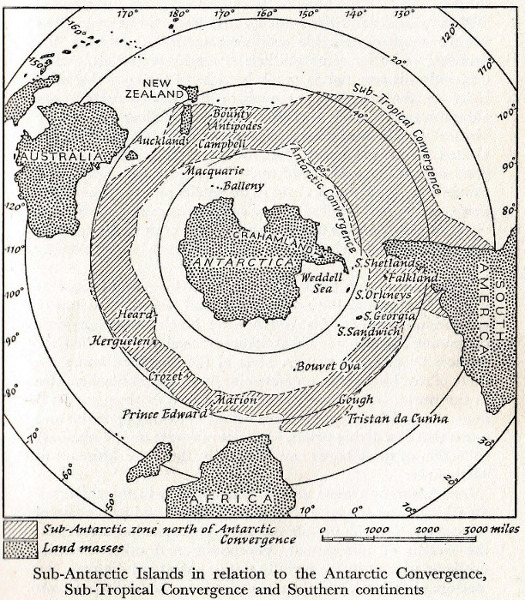 Named after Lachlan Macquarie, an early governor of the Australian state of New South Wales, Macquarie Island is located in the south-western part of the Pacific Ocean approximately 1280 km (800 miles) south of Tasmania and approximately 1440 km (900 miles) from the Antarctic 'mainland' – at 54° 30′ S, 158° 57′ E.

Australian possessions in this area include Macquarie Island, Judge and Clerk Islets about 16 km (9 miles) to the north, and the Bishop and Clerk Islets 36 km (20 miles) to the south  –  the latter being the furthest point south belonging to Australia. Of volcanic origins, Macquarie is about 37 km (21 miles) long and a mere 3.5 km (2 miles) wide, and is made up of two parts connected by a narrow isthmus, on which is found the permanent ANARE base.

Macquarie’s climate is kept moderate by the surrounding sea, and, because of this (and although snow is common between June and October, and may even fall in the island’s summer), the average temperature in every month of the year is above freezing.

Macquarie Island’s average of only 856 hours of sunshine per year makes it one of the cloudiest places on Earth.

It would appear, though, to have been (comparatively) mild during Mary’s stay on the island with this seemingly borne out by the fact that, in Mary’s photographs featuring people, everyone appears to be dressed in shorts!

ANARE’s Macquarie Island Station was established at the foot of Wireless Hill on the isthmus at the northern end of the island on 25 March 1948.

This base has been in continuous operation ever since (with, currently, a population of between 20 and 40 people over the year), so it was well into its twelfth year of existence when Mary and her colleagues made their December 1959 visit.

Wildlife is extensive on the island with large numbers of seals, penguins, and many species of sea bird. It is quite common for seals and penguins to rest in the shelter of the buildings around the ANARE station, and the island is also the last green outpost of land before the ice of the Antarctic.

For information regarding current Macquarie animals and plants, see here.

Mary herself also made extensive notes when researching Macquarie, which can be found here.