Approximately a decade after its 'accidental' discovery by Hasselburgh, Macquarie Island was visited by a Russian expedition exploring the region in the name of Tsar Nicholas I and under the command of Thaddeus Thaddevitch / Fabien Gottlieb Thaddeus (sources differ as to his forenames) von Bellingshausen. (See portrait, right.)

The Russian expedition sailed from Sydney on 11 November 1820 in two ships Vostok and Mirnyi (respectively East and Peaceful) and arrived at Macquarie Island on the 28th of that month. Once there, von Bellingshausen’s men traded with the sealers living and working on the island, collected specimens of Macquarie’s flora and fauna and, quite literally, put the island on the map, both determining its geographical position and mapping its coastline.

In 1822, just two years after von Bellingshausen’s expedition, Captain Douglass of the ship Mariner failed to be impressed by his first sight of Macquarie deeming it: 'the most wretched place of involuntary and slavish exilium that can possibly be conceived; nothing could warrant any civilised creature living on such a spot'.

Seemingly echoing this view (and despite the severe treatment meted out to convicts at this time in Australia’s history), the 'authorities' concerned, having considered using Macquarie Island as a 'prison colony', turned down the idea. thinking the place too hostile even for prisoners, with a 1926 item in the Hobart Town Gazette reporting, '… the remote and stormy region in which Macquarie Island is placed is a strong reason against the adoption of that place as a penal settlement'.

For three and a half years beginning in 1896, Joseph Burton collected natural specimens from Macquarie while working with parties of oilers there. 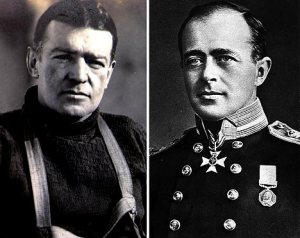 In 1901 and 1909 respectively, scientists working with Captain Robert Scott‘s and Sir Ernest Shackleton’s Antarctic expeditions also collected specimens on Macquarie, though it is not clear if either of these renowned explorers set foot on the island. 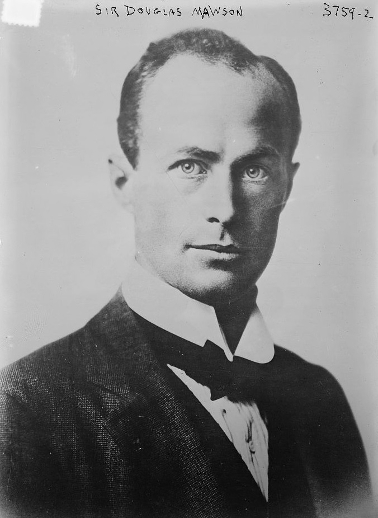 Sir Douglas Mawson (1882–1958) was born in Shipley, Yorkshire but lived in Australia from the age of two, when his parents emigrated to that country. As a sixteen year old, he gained entrance to Sydney University, where he studied engineering and geology, and, while studying for his doctorate, his first Antarctic experience came through his membership of Shackleton’s 1907-09 Nimrod expedition. Originally intending to stay only for the duration of the ship’s presence in the first summer, both he and his mentor, Edgeworth David, stayed an extra year. In doing so they became, in the company of Alistair Mackay, the first to climb to the the top of Mount Erebus and to trek to the South Magnetic Pole - which, at that time, was over land.

Setting out in the vessel Aurora on 2 December 1911, Mawson reached Macquarie Island on the 11th of that month. On the Aurora were appropriate materials for the construction of huts and wireless masts, and thirty one men, of whom five were to remain on Macquarie to man meteorological and radio bases, these bases being the first objective of the mission. The supply vessel Toroa, which arrived shortly afterwards in support of Aurora, carried a further seventeen expeditioners, a flock of sheep and a load of coal. In addition to setting up the radio relay station (appropriately enough at Wireless Hill), the group of five men he left on Macquarie mapped the island, studied its botany, zoology, meteorology and geology, and conducted geomagnetic observations.

The radio relay station was to meet most admirably the role that had been planned for it, in allowing communication between Mawson’s Antarctic base at Commonwealth Bay and Macquarie Island, that island and Australia and, as might well be expected, in the reverse direction too.

The first aim of Mawson’s expedition having been achieved, the Aurora sailed south for the Antarctic 'mainland' leaving Macquarie Island on 23 December 1911, forty eight years to the day before Mary Gillham landed there. Accounts of Mawson, and his expedition after leaving Macquarie, are well worth reading as these illustrate, in part, why Mawson has been considered to be a 'Great Australian'.

Douglas Mawson himself returned to visit Macquarie Island (aboard Discovery) in 1930 with the British, Australian and New Zealand Research Expedition (BANZRE).

Moves were afoot to re-establish sealing on Macquarie. Mawson declared vehemently his opposition to this and, in part because of this opposition, the plan was refused.

Sir Douglas Mawson died in 1958, the year prior to the arrival of Mary Gillham and the other first female visitors to the Antarctic’s arrival on Macquarie Island.

A banknote, a coin and stamps issued in Australia all featuring Sir Douglas Mawson. Mawson’s image appeared on the A$100 note from 1984 – 96 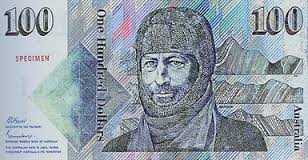 In 1957, the Australian Post Office introduced its first 'Antarctic Territory Stamps'. Issued on the Australian mainland on 27 March, these stamps were made available in Antarctica on 11 December of that same year and thus would have been available to Mary’s party. The stamp shown here would probably have been one of those that Mary sent to John (her brother) with the Macquarie postmark referred to in her diary entry for 21 December 1959. This clearly shows the lie of the old adage: 'Philately gets you nowhere!'