During an adventurous life Mary Gillham visited over 40 countries worldwide. Holidaying near the Swiss-German border in 1939 (weeks before WWII was declared), observing a UN evacuation from the Democratic Republic of the Congo in 1960, being unable to lecture in Kano, Nigeria due to civil war (1981), leading her first overseas Extramural trip as part of her work for Cardiff University in 1964 (leading a convoy of 4 cars from Cardiff to the South of France) and continuing to travel outside of the UK until 2006 when she was 85 it is fair to say that Mary saw some sights!

Here we focus on some of Mary's earlier or more exotic trips starting with her year in New Zealand (1957) followed by her 5000 mile road trip through the Australian desert (1958), becoming one of the first four women scientist to join an Antarctic expedition (1959), an eventful 4 month journey through Africa on her way back to the UK (1960) and finishing with Mary taking part in a Royal Society expedition to the remote Indian Ocean atolls of Aldabra and Cosmoledo in 1970.

On Monday 19 November 1956 Mary departed from the Royal Albert Docks in London, England on board the SS Rangitoto bound for Auckland and a year living in New Zealand.

Though her principal employment during that year was as an exchange lecturer in botany at Massey College (now Massey University), Mary took advantage of every spare moment to study the natural history of many parts of New Zealand. Mary’s particular fascination was the ecology of islands, and she documented plant and bird life all around New Zealand’s long coastline, on Kapiti, in the albatross sanctuary on Otago Peninsular and the gannet colonies of Cape Kidnappers, on Stephens Island and The Brothers in the notoriously rough Cook Strait, on Little Barrier in Auckland’s Hauraki Gulf, on Mayor and volcanic White and Motiti Islands in the Bay of Plenty. From the plant life of the penguin and muttonbird colonies on Stewart Island to the fish and marine life in the Bay of Islands, Mary explored more of New Zealand in 365 days that most locals do in a lifetime.

To showcase Mary’s antipodean adventures, we’ve created an interactive map that uses extracts from Mary’s diaries and her own photographs and drawings to tell the story of just a few of Mary’s explorations of New Zealand. Simply click on the map to follow Mary’s adventures.

On 21 December 1957 Mary flew from Auckland, New Zealand, to Sydney, Australia, to begin the next stage in her four-year world tour to study the vegetation of bird islands in the southern hemisphere. She was to remain in Australia for almost two and a half years, spending 1958 working as a Senior demonstrator in the Botany Department at Melbourne University and 1959-60 conducting research, mostly on offshore islands, for CSIRO, the Commonwealth Scientific and Industrial Research Organisation.

As she had in New Zealand, Mary explored more of the huge continent of Australia and its numerous islands than most locals do in a lifetime. She made several study trips to the islands of the Bass Strait; she toured much of Tasmania; one university holiday was spent on Queensland’s Heron Island; along with three other young women she spent a month touring the hot arid interior of Central Australia in a Volkswagen van; she delighted in the wildflowers and wilderness of Western Australia; and she was one of the first four women scientists to spend time on Macquarie, Australia’s Antarctic island.

On 14 April 1960 Mary sailed away from Australia, having tangled with snakes, been bitten by muttonbirds, contributed plants to a herbarium, flown in a Tiger moth and slept many peaceful nights under southern stars. Her time in Australia made an irrevocable impression on Mary and she was to return to her old haunts many times in the 1980s and 90s. You can read more about Mary's Australian adventures on our Timeline.

In 1958 Mary Gillham was in Australia, officially employed as a lecturer in botany at the University of Melbourne but unofficially spending every spare minute exploring that country’s vast open spaces. And, though Mary was a self-proclaimed lover of islands, she did not hesitate to explore the dry and dusty Australian outback. Her diary for Tuesday 5 August 1958 reads:

Heard at lunch time that there was a slight possibility of me joining a 29-day camping trip of 5000 miles round Central Australia instead of cartographer Joyce Wood, who is having to fall out due to illness. By afternoon was told the opportunity was available and from 5 to 6.30pm went with Prue Dempster to the house of the two remaining party members, Ady Gravenor and Lorna Trist, discussed routes, etc, and decided to throw my lot in with them in spite of all other carefully laid plans.

Just five days later, on 10 August 1958, Mary set off with Ady, Lorna and Prue, in a borrowed Volkswagen Combi they nicknamed Willie, for a one-month tour of central Australia. Luckily for us, Mary kept her diaries and many of her photos from that very adventurous, often hazardous trip so, to celebrate Mary and her daring exploits and to show a side of Mary that many may not have seen, we’ve used extracts from Mary's diaries, together with her photos, to create an interactive map of their journey. Now everyone can follow along with bold Mary and her adventurous friends just by clicking on this map.

On 17 December 1959; Mary, along with three fellow female scientists departed from Melbourne harbour, Australia on board the Thala Dan and became the first female expedition group to journey to the Antarctic on a 14-day voyage to Macquarie Island. The expedition was organised by the Australian National Antarctic Research Expedition (ANARE). Her fellow scientists were Isobel Bennett, and Hope MacPherson (both Australian) and Susan Ingham (British).

Mary’s scientific purpose on the island was to analyse the effects of sea birds on the island’s vegetation. Marine biologists Isobel and Hope were to look at the ecology of inter-tidal origins and shells respectively. Biologist Susan Ingham was to observe the lives of bandit penguins, wandering albatrosses and elephant seals.

Mary made the most of her short time on Macquarie, making notes on the wildlife she came across during her daily expeditions. She explored the isthmus where the ANARE base is located and during her stay she trekked to North Head, Handspike Point and Nuggets Point. The island had an abundance of king, royal and rockhopper penguins, elephant seals, albatrosses and many other species of seafaring creatures.

Using Mary’s diary of her expedition to Macquarie Island and the photos she took, we’ve created an interactive map to follow Mary’s exploration of the sub-Antarctic isle.

Two weeks after leaving Melbourne on the Southern Cross, Mary finally arrived in Cape Town on 1st May 1960. Her principal purpose in South Africa was to study the birds and wildlife on some of the islands, with particular emphasis on the effect of guano farming on them. Her work took her to the area and islands around Saldanha Bay (Western Cape) and Dassen and Robben Islands off the Cape Peninsula. When in Cape Town, Mary stayed in Claremont with Bertus and Bunty Rowan who worked in fisheries, but also had a keen interest in birds.

Mary never missed an opportunity and, during her stay in South Africa, she was invited to join friends of acquaintances to travel the Garden Route from Cape Town to Port Elizabeth. Wherever she traveled, she was meticulous at recording what she saw and learned in diaries and photographs. These diaries also detailed the incredible journey Mary took by getting lifts and using public transport to travel up through South Africa and Rhodesia (with a trip to the Kafue Game Reserve - funded by the Rhodesian Government) before flying to Nigeria via the Congo and Ghana.

True to form, Mary traveled through Nigeria, stopping at Minna for a couple of weeks to carry out some work at the agricultural college and finally returned to the U.K. on 26th September 1960.

You can follow Mary's incredible journey home using the interactive map below, which has been created using extracts from her diaries and slide photographs she took at the time.

Included in the British Indian Ocean Territories, the Aldabra atoll was under consideration as a suitable location to build an international military aircraft staging post in the mid 1960's. Fortunately the ecosystem and unique biodiversity of Aldabra was defended robustly enough by a public outcry that redirected plans away from this environmental jewel, a significant contributor to which was The Royal Society who later sponsored Mary's research.

A specialist in island ecology, Mary was to stay there from mid Feburary to early May in 1970, as part of the first wave of ecological and behavioural specialists sent by the society, to study the relationship between the native vegetation and bird life.

In total Mary visited at least 45 different countries, making over 100 trips abroad. The size of each flag below is basedon the number of visits Mary made to each country - the USA and Spain were each visited 11 times while German, Israel and Brazil were each visited just once.

Here you can see the break down of where Mary travelled and how frequently she went there. 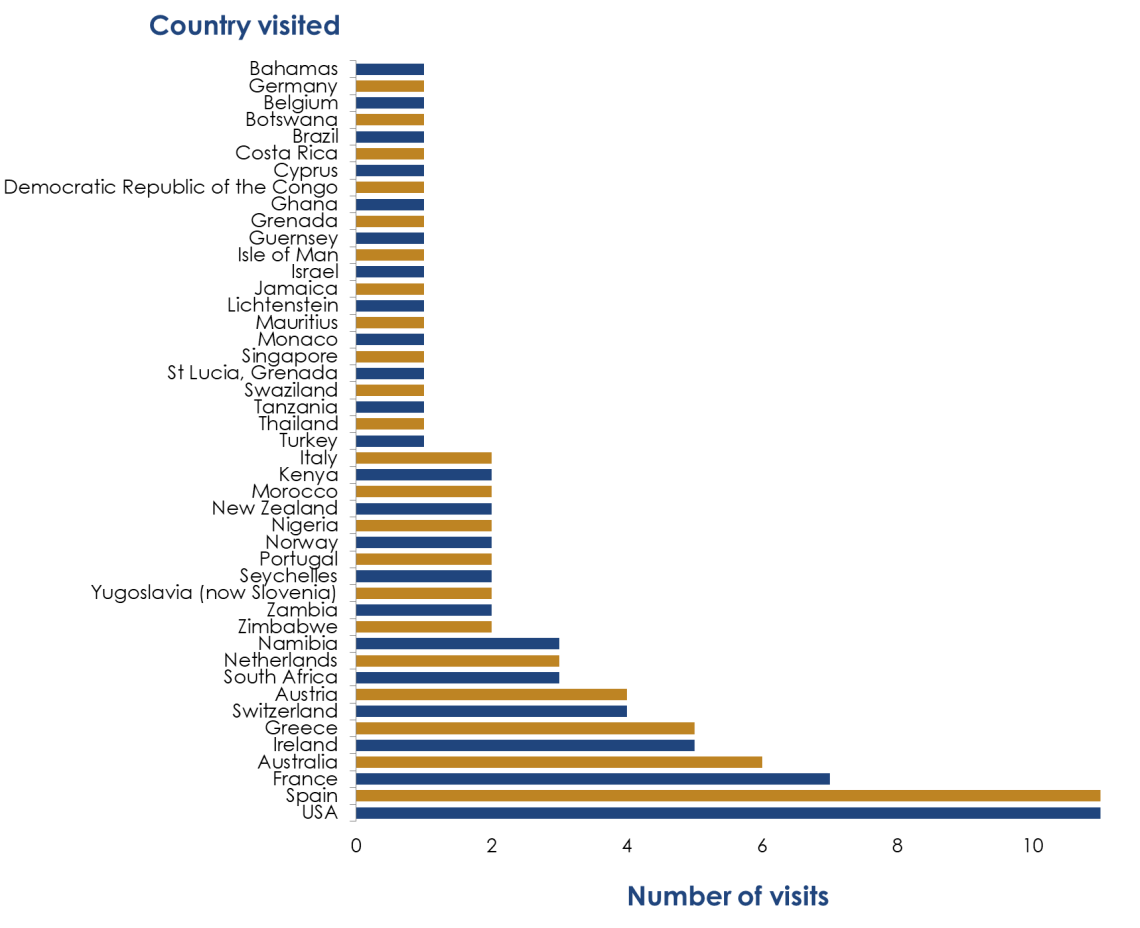