This was a joint family holiday, Mary with her parents Charles and Gert and brother John, plus Mary’s mother’s brother Sid Husband, his wife Isabel with their daughters, Mary’s cousins, Marjorie and Stella. 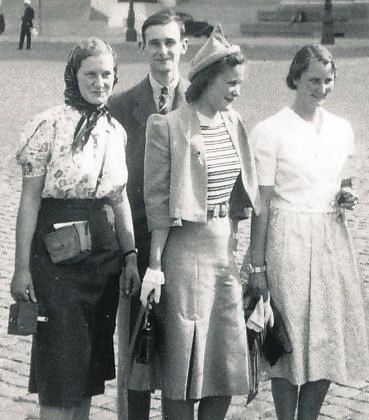 We left home at 6.30pm and passed through Rochester, Chatham and Canterbury, arriving alongside the quay at Dover by 10.15pm. Between Canterbury and Dover the Morris radiator boiled dry but otherwise the journey was without mishap. After passing through the Customs we boarded the boat ‘The Hampton Ferry’ at 11pm and, after a brief look round, settled down on the couches in the smoking room to sleep.

Thursday 27 July More trouble with the Morris’s radiator … leaving the Morris in a garage for repairs [in Ostend] … [later] walked around the main square in Bruges …drove through Bruxelles, where a national ball game was taking place in a square … camping place on the site of Waterloo …

Friday 28 July … car to a Morris agent in Bruxelles immediately after breakfast … visited the town hall, the Palais Royale, the War Memorial and the Palais de Justice … arrived in Namur after dark.
The photo at right shows Mary, John, Stella and Marjorie, in Brussels.

Saturday 29 July … travelled across the most interesting part of Belgium, the Ardennes … lunch in the Duchy of Luxembourg … During the afternoon we passed the Luxembourg-French Customs into Alsace-Lorraine. Here the entanglements of barbed wire and pillboxes showed evidence of the newly formed Marginot Line … In Nancy we stopped for shopping, and camped soon after near the village of Flavignet …

Sunday 30 July During the morning we traversed the forested Vosges Mountains and for some distance we could see the Black Forest of Germany on the other side of the Rhine. We arrived in Asle at about 1.30pm and crossed the frontier into Switzerland … We followed the mountain road to Berne and had tea in a gorge with minor torrents falling from the cliffs around us … From Berne onwards we met hundreds of cyclists pedalling back from the mountains and we saw numbers of soldiers in their smart light-blue uniforms and tammies … We camped on the shores of the lake at Strandbad Neuhaus, 1½ miles from the town of Interlaken.

Monday 31 July … by 7.30am five of us were bathing in the lake. The water was icy but very exhilarating.

Tuesday 1 August [at the Blue Glacier, near Grindelwald] … six of us decided to climb over the glacier. Our guide roped us all together and with him in front, complete with ice axe, we looked a proper mountaineering party.

Wednesday 2 August Six of us had planned to go up Jungfrau (12,400 feet) … At Scheidegg we changed on to the Jungfraubahn …the profusion and variety of the alpine flowers was marvellous … view in all directions was magnificent … decided to explore the ice palace … a life-sized model of a car with seats to sit on inside carved from solid ice and a remarkable model of the inside of a village inn, complete with furniture, beer barrels …

Thursday 3 August …Brieg, our next camping place …over the Grimsel Pass (7,600 feet) up a series of exciting hairpins …Snow walls six feet high lined the road in place … 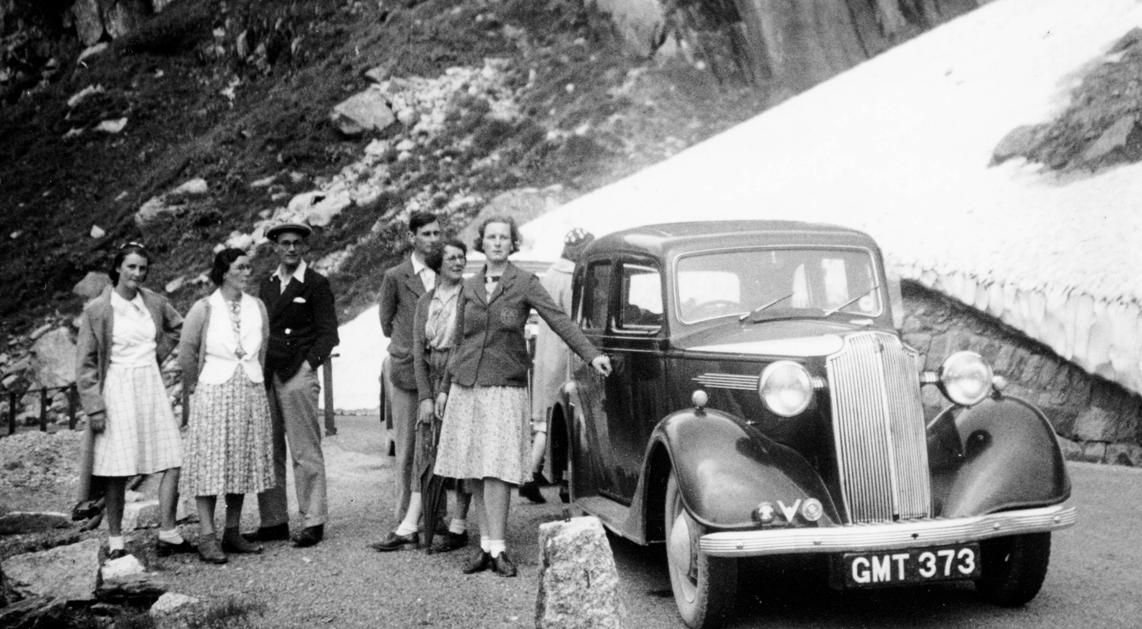 Saturday 5 August … left Brieg …along the bad road we had traversed two days earlier … at one point the Vauxhall, which was leading, got stuck in the soft mud … ascended the Furka Pass in pouring rain … I fell in to two bogs and arrived back after half an hour soaking wet but triumphantly carrying my gentians! … on the shores of Zurichsee at Bachau …

Sunday 6 August … decided to spend the day at the Swiss National Exhibition at Zurich.

Monday 7 August … seven of us bathed in the lake which was surprisingly warm after the cold water at Interlaken … After lunch we went into the town of Zurich … [evening] to the international camp fire … a great success, each country represented (i.e. England, France, Germany, Belgium and Luxembourg, Holland and Scandinavia) taking it in turns to sing well known songs from their respective countries …

Wednesday 9 August … left the site at 7.30am … After leaving Basle we came through the important fort of Belfort … the town itself was crowded with soldiers … settled at Bar-sur-Aube for the night.

Saturday 12 August … spent the morning at the Palace of Versailles … camped in the grounds of the Chateau de Bertangle not far from Amiens … I had a long talk (in French) with a young man from the village on the international situation and the English troops who were stationed there during the last war (when he was a child of 6).

Sunday 13 August … to Dunkerque where we arrived around midday … time to board our boat, ‘The Twickenham Ferry’ … the ‘fair land of France’ behind us at 2.30pm.

The Gillhams and Husbands only just made it back to Britain in the nick of time. Less than three weeks later, on 1 September 1939, Germany invaded Poland, triggering the start of the Second World War. Mary later wrote about this holiday:
We were camped beside the Rhone Glacier in the Swiss Alps when rumours of war became reality and we had to scoot for home on dwindling petrol supplies.