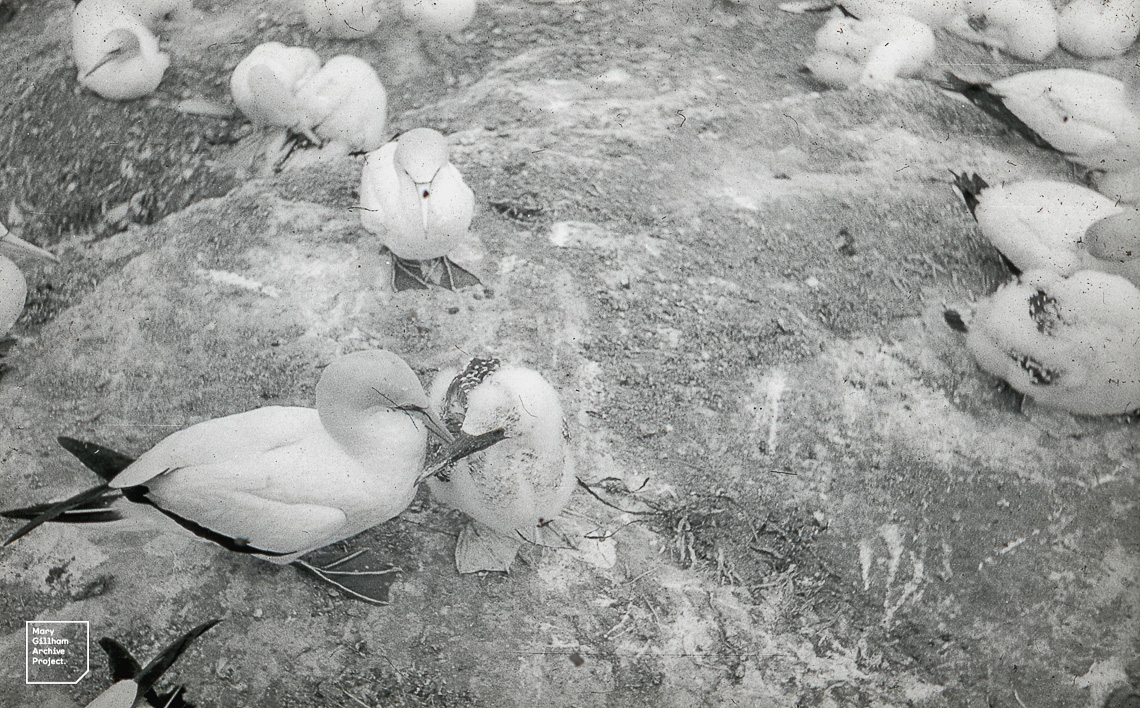 I caught the 8.15am bus from Napier to Hastings and the 9.05am from Hastings to Te Awanga. Noticeable en route were the large numbers of Maoris, the fields of hay bales (oblong as at home) and the plots of marrows.

I spent the morning on the Te Awanga beach beyond the river lagoon seaweeding and listing plants, collecting shells and watching the gannets dive into the flocks of fishing gulls and terns. Folk were ‘canoeing’ on a flat board cut to the shape of a canoe but only 1 inch above water and there were other boaters, fishers and bathers from Burdons’ motor camp.

Then to Burdons’ warm-hearted muddle where one marvelled that anything could ever be found – even the mattresses on the beds were screwed into odd shapes. That things could be found was illustrated by the assortment of ‘treasures’ which were brought as exhibits, dust and all – Moa bones, fossilised wood heavy as stone, half-disintegrated wood in the form of lignite, sea urchins, starfish, seaweeds, shells, photos, badges, etc. A sandwich lunch with dozens of people coming and going (there was to be a musical party that night – “just ourselves, only 32”)! Twenty minutes’ chaos when it was discovered that one of the family had gone off on the bicycle made ready for the “English doctor” but at length we were off, self and 3 children of 14 or under who were to act as my guides.

Two miles along lanes and over a rickety wooden bridge and then 6 miles along the beach from Clifton; 6 very exciting miles during which my bicycle took me over and through hazards that I would not have believed negotiable. About ½ the distance was over pebble-strewn sand, about ¼ over smooth firm sand and ¼ over boulders where, of course, the bikes had to be carried. The tide was falling but had not fallen enough to prevent us having to ride through the edge of it at intervals and get wet feet as it washed up over the pedals. (The children, like most NZers in summer, were barefooted and hard as nails.) In spite of the fact that I rode a tall man’s bicycle with a fixed wheel and backpedalling brake to which I was not accustomed, there were no calamities and we reached the rest hut intact.

I had come prepared with an extra pullover, knee socks and iron rations to spend the night here but there were 6 of the junior wildlife wardens and their commander, Reg Williams, there in the hut so I re-planned my moves to get back in time to accept hospitality at Haumoana Grange.

There was still a mile to the two further gannet colonies after the hut – up hill over the cliffs on foot. (We had passed the first colony ½ mile before at Black Reef – most of the birds on low flat-topped sea-girt stacks – some overflowing onto the cliff slopes above.) The furthest and original colony was attained by traversing a narrow neck of land with a sheer drop of several hundred feet on either side and was out of bounds on windy days or wet days when the whitish clay soil was extremely treacherous. 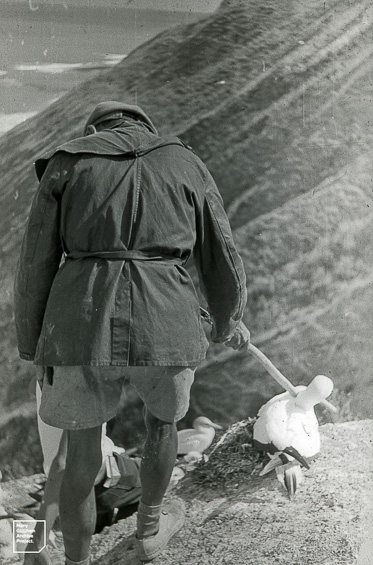 The wizened bronzed ranger held a bird’s beak back with a long stick and hauled us up a vertical bit to a tiny patch of bare soil among thousands of birds shouting “Mind that bird” repeatedly. “She made an awful mess of someone this morning” as we edged past those at the bottom of the vertical bit. We minded but they lunged out spitefully (and who could blame them at such an invasion) and one took two considerable pieces out of one of the boy’s legs. A total of 10,000 birds including non-breeders; all but one of the eggs hatched.

Adults were ‘necking’ and ‘billing’ and holding grass in their beaks (tho’ most of the nests were of seaweed) and we saw some ‘swallow’ the chick’s head in feeding. The clamour and stench was as in Welsh and Scottish colonies but the head yellow brighter and there was more black, also they were less timid than British birds and not at all likely to leave their nests for an interloper. Even the chicks were ferocious and no-one went nearer than need be.

I lingered below this colony listing plants after the others had gone and as I returned over the narrow neck I met Peter Scott and party – including Mr Francis of the kiwi farm and various government and wild life officials. P. Scott and I exchanged words and went our various ways – I with Bob Cooper, one of the wildlife boys keen on botany and directed to show me plants. (He hoped to go to university but “I’m not going to be one of those people who go round giving lectures – I’m going to be a professor and spend my time in the open air” – Good luck to him.)

Left from the rest hut at about 5pm and lingered for short spells looking at vegetation of some of the remarkable vertical-sided gullies or slits which led back many feet into the cliff, one of them terminating in a glow-worm cave. Rain of small pebbles all the time and remembered Burdon’s warning “don’t go too near anything except where there’s just been a new slip as the next slip probably won’t be in the same place”.

As soon as we were past the last high cliffs we flopped on the beach, washed our feet in the cool briny where tiny fish were leaping like silvery flashes from the surface and partook of refreshments. I had food and drink with me but the oldest of the children had money and sped to the little refreshment stall at Clifton motor camp (run by Mr Stanley, issuer of gannet permits) to spend it. Everything was divided into four and my share consisted of a long liquorice strap, a piece of candy, some peanuts and a bottle of pop! I swopped some of my more wholesome provender and everyone was happy.

We cycled the next two miles along the beach as this involved crossing two freshwater rivers which would help to wash the salt and seaweed from the ill-used (but well oiled) bikes. I shed shoes and socks for the first river but the second was well above the knees so I let a boy take my bike through and thoroughly dowse it while I crossed by a footbridge.

A hot meal at Burdons and then I piled into the master’s ancient “chariot” – a 1928 vintage dark red tourer, the back seat a litter of shovels, the huge bin of camp rubbish on the tailboard! We bowled gaily along on the wrong side of the road, the driver talking non-stop and pointing at features of interest regardless of hand signals but we reached “The Grange”, drove up one of the two lengthy drives and honked on the doorstep to make our presence known.

Beautiful rambling whit e house with fountain and Phoenix palms on the lawn, brilliant Bougainvillea round the porch, and river running by (actually a backwater of the Tuki-Tuki). I was introduced to my exceedingly handsome Maori host, John [renowned New Zealand architect John Scott], barefooted and in shorts, reading at the kitchen table (both reported themselves bookworms) then went up for a much-needed bath.

We adjourned to my host’s study lined with architectural drawings where he lay curled in an armchair reading, and partook of refreshments and chatted on many subjects. Delightful interior decoration including artistically arranged lichen-covered sticks, polished Samoan canoe paddles, Maori carvings and huge Chinese rice planter’s hat. Sub-tropical touch was the host of moths and mosquitoes which had come in through the open window and covered my bed, necessitating spraying and the closing of windows until the light was off.