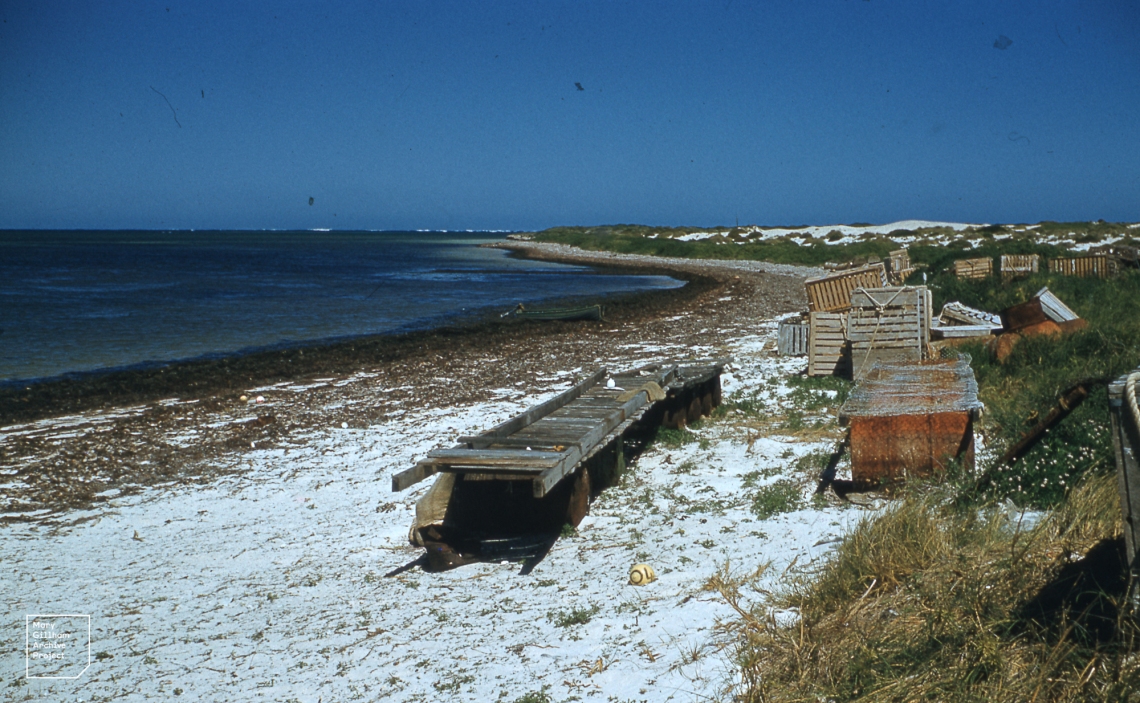 Friday 4 to Saturday 12 September 1959
A few exerpts from Mary's diary entries from her trip to the Albrolhos Islands, with Bert, Don, Prof Waring and Glen, all University bods and naturalists.

We dropped anchor on a sandy bottom off North Island and Glen and I went ashore in the first dinghy (with outboard motor). A tortuous passage among thick beds of weed which caught at the propeller and made hard going of it for the little craft … We had expected to be sleeping in the open here but some of the crayfishermen’s huts were found to be open so we made ourselves at home in three of them …

After lunch … we set off across the sandy wastes behind the huts to explore. I tagged along to glean botanical info from Glen and the four men were bent on discovering the mammal situation … no sign that any mammal existed now – no fresh scats and no tracks in the sand apart from those of a gone-wild pussy cat which haunted the vicinity of the huts at night. 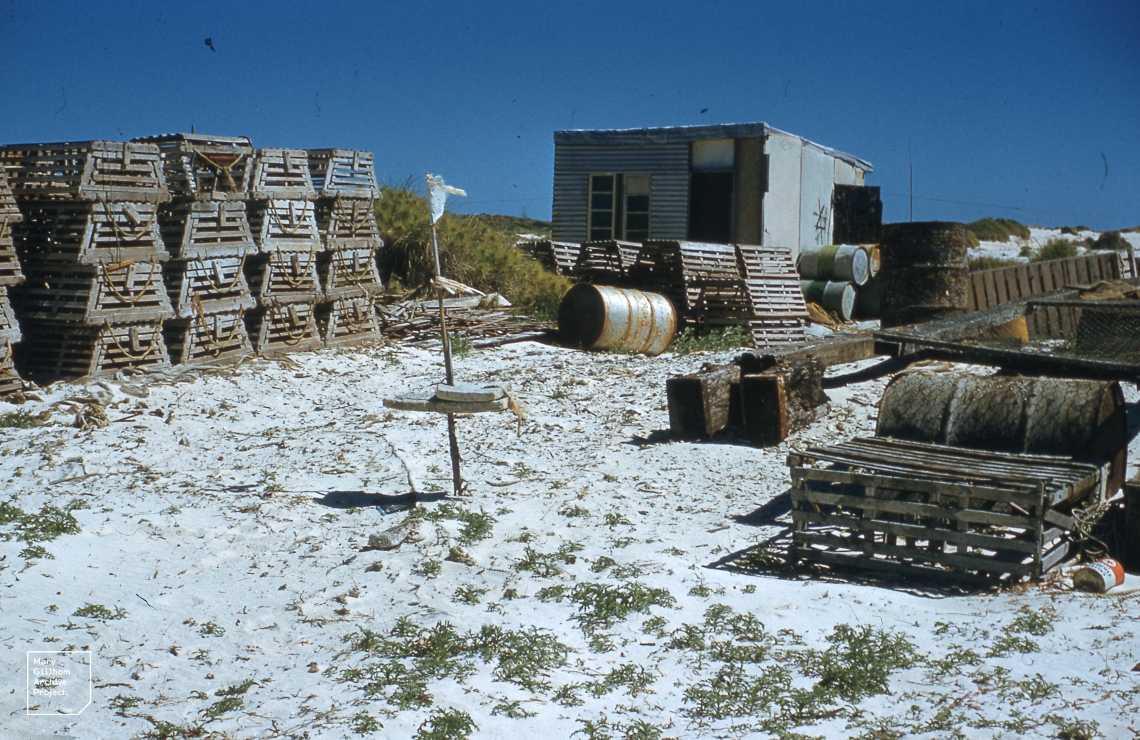 … We rose betimes, breakfasted at 7.30am and went about our various businesses. Mine took me no further than my sleeping hut for the first half of the morning as I had a huge pile of plants to get into press … in the afternoon I divided my attention between the eroding sand hills and the salt lake. Hot sun and a pleasant breeze, my attention divided between strolling and sitting as I gathered general botanical info. 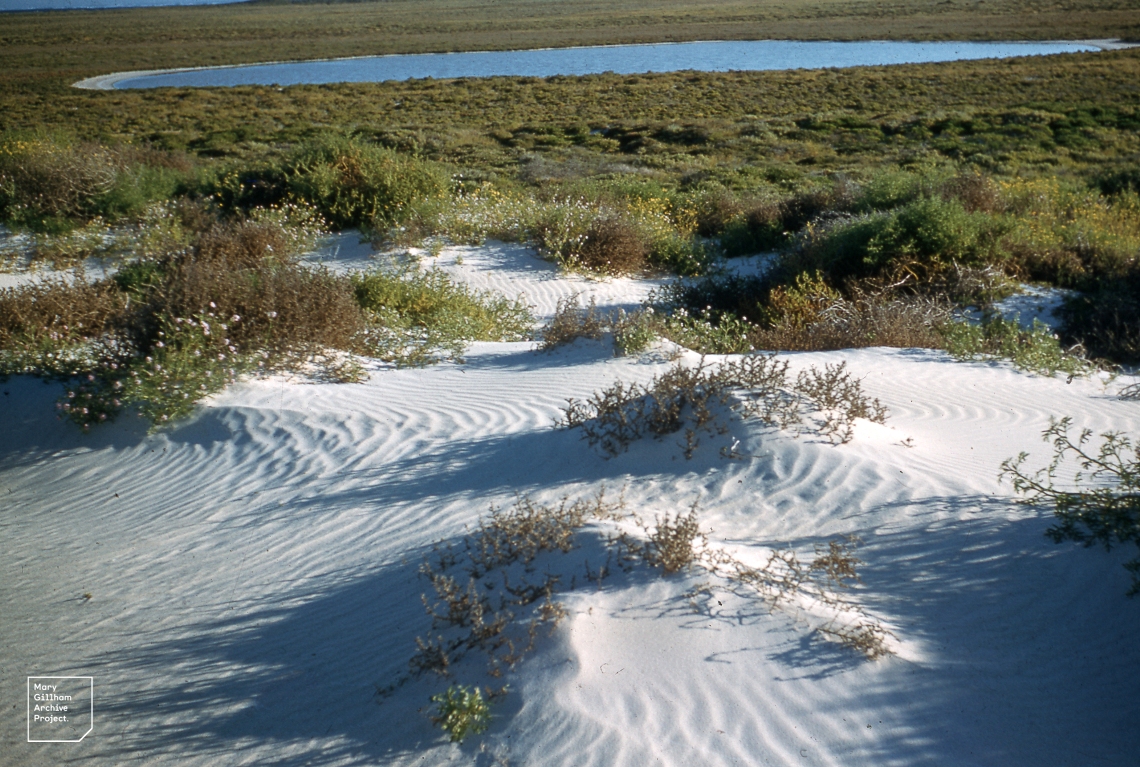 I spent the day on two transects, one from the salt lake to a limestone pavement, the other from the dunes to the central sand flat. I recorded four different sorts of lizards as I worked, one of them a small legless one like a minute slow worm.

Soon after 10 o’clock the Lancelin’s dinghy came in to start transferring our goods on the first lap of the journey to the next island. Our destination was East Wallabi Island, two hours’ sailing distance away to the south.

This island proved hotter than any we had been on yet and, as there were no huts, our first concern was to erect a flysheet to protect the food from the sun … I spied a pile of crayfish pots along the beach and earmarked a patch on their further side as my private boudoir. The soft thick dry deposit of Posidonia drift in their lee proved a more comfortable mattress than I have yet found in the field, beating even the bracken and pine needles of Big Dog Island, and I spent most of the night in a soft depression between my half-length lilo and the crayfish posts with their grizzly remains of sheep’s heads and fish skeletons. The pots themselves served as the type of slatted luggage stand with which one is provided in all the best hotels.

I spent the afternoon exploring the rocky northeast point, mostly limestone pavement bounded by undercut cliffs several yards high but with dunes on the south side. 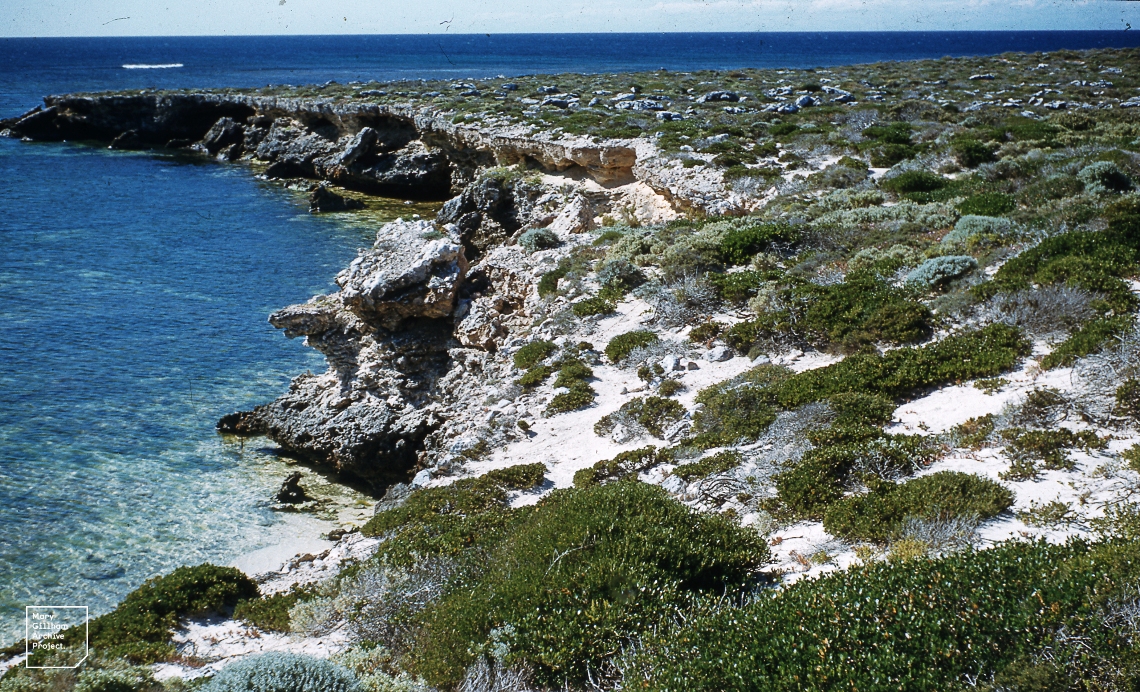 … I made for the main body of the island today, creeping frequently into the shade of the small bushes to get a respite from the fierce sun … And so back to the beach, the sun now blazing mercilessly on the shadeless expanse, for a quick lunch and a lazy paddle in the shallows while the goods were being ferried back to the boat.

Not much more than an hour later we were transferring the things back to the dinghy for transport to the third and largest island, West Wallabi. Here there were huts with unlocked doors and we had permission from the owner of the largest to camp in them …

After breakfast I set off to explore the wedge-tailed shearwater rookery in coral sand not far from the huts in dense saltbush (Atriplex paludosa). The birds were in residence … Every here and there a gentle crowing issued from below ground …

Later, when I returned to the camp for lunch, the three boatmen came ashore … brought with them a little shearwater. This bird, only half the size of the muttonbird and with white face and underside, had landed on deck the previous night and had seemed incapacitated. It fluttered to my should and clung there without offering to go away … I could see no sign of injury, the bird flapping violently when in the hand although so willing to quietly on the sand, so I waded into the sea with it and let it go. For a while it sat quietly on the water, then it paddled to and fro vigorously with halts to rest then, finally, after about ten minutes, it rose in perfectly normal flight and continued on its way until lost to sight. 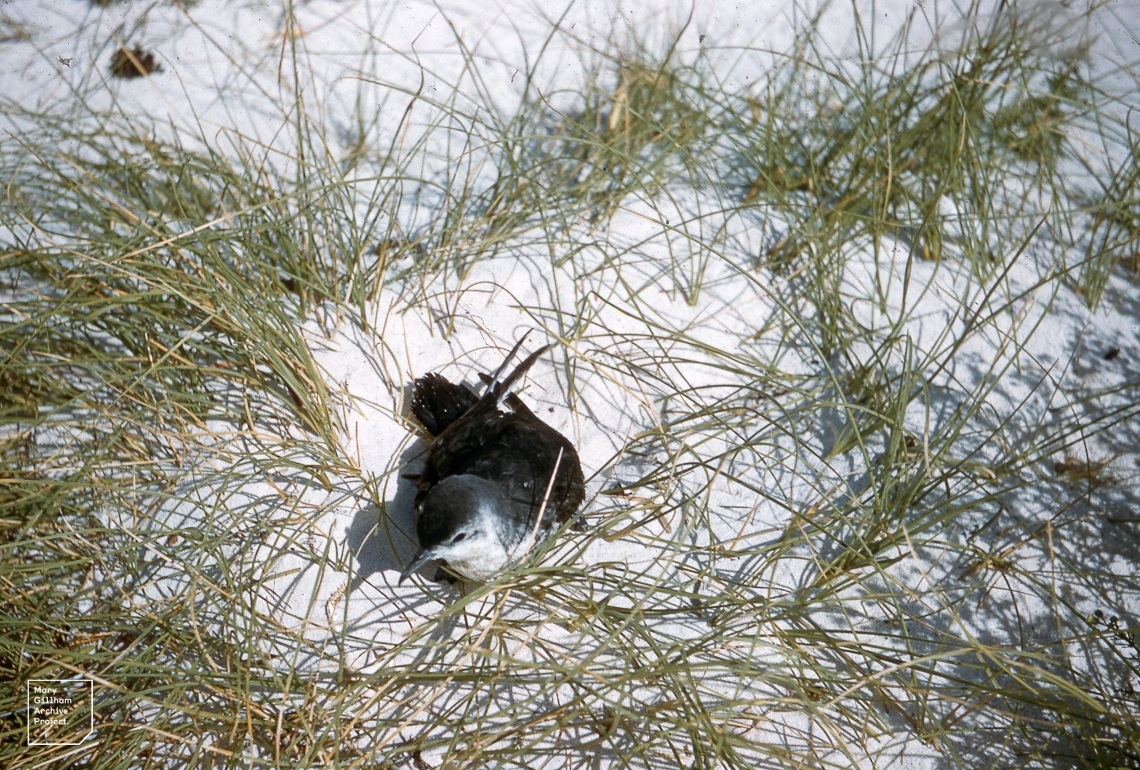 My first find was a carpet snake, around 4½ feet long, tapering finely at both ends and loosely twisted into a lethargic coil. I approached cautiously to take a photo at three feet away but I needn’t have bothered. It would have taken more than a camera three feet away to waken this sleepy reptile. I changed the film and wanted another different shot so poked the snake amidships with my fingers. The skin was surprisingly supple. The response was but a few spasms passing both ways from the point of contact. I tried again (very brave in the knowledge that this was one of Australia’s few non-poisonous snakes). This time there was movement, then a new series of coils but not from the piece of ground and the filmy white eyelids remained closed.

I took a second shot and passed on … 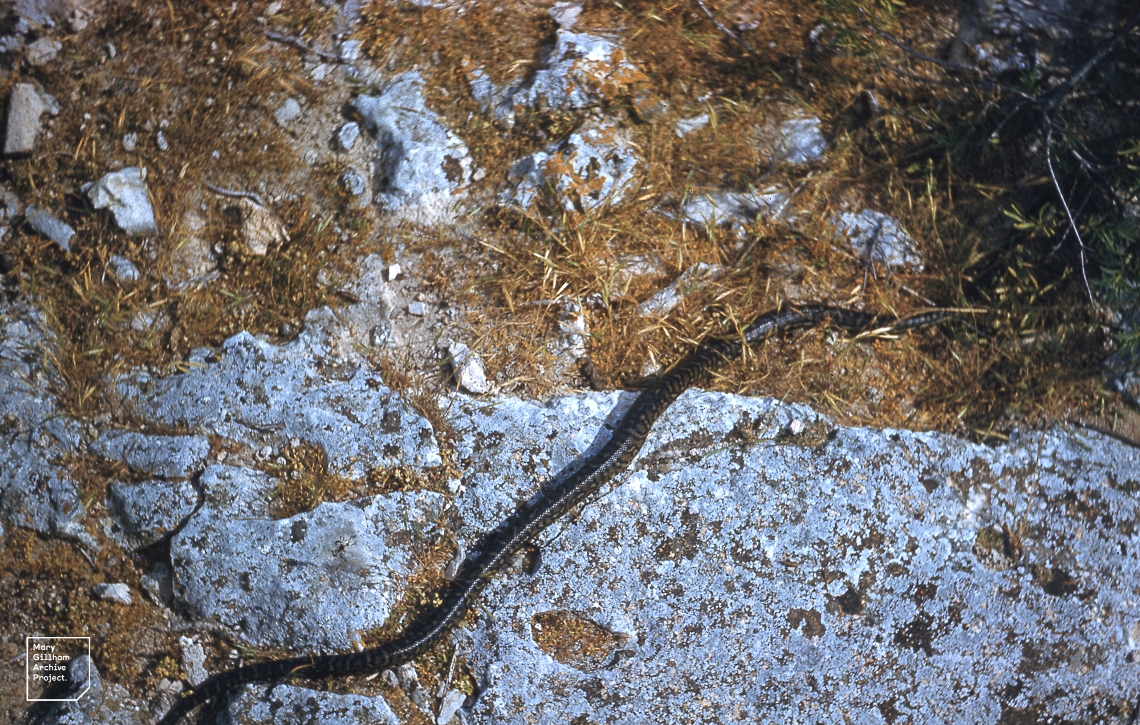 Today was scheduled for departure and we were up before larks and cracks of dawn, alarms set for 5am. Lancelin had promised to pick us up at daylight (which was soon after 6am) …