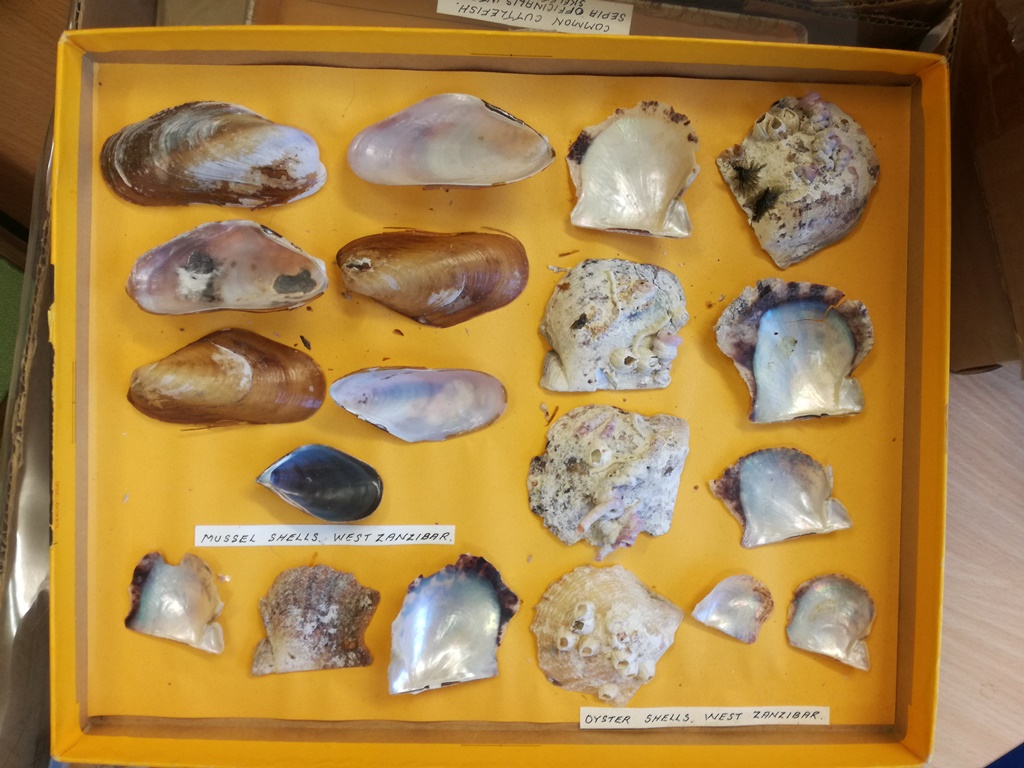 We have recently started talking with Mary’s colleagues and friends to help tell the story of her life and work. Last week Dr Madeleine Havard came into the office to chat … Madeleine knew Mary through her work with environmental organisations such as the Glamorgan Wildlife Trust (as was, now the Wildlife Trust of South and West Wales) and Cardiff Naturalists, but primarily by taking over the reins of the natural sciences Lecturer in Extra Mural Studies at Cardiff University vacated by Mary herself. It was while chatting with Madeleine that we heard about the boxes of teaching materials which, on retiring, Mary had left in the old Extra Mural building at 38/39 Park Place.

“Despite Mary leaving a few years previously, there were still boxes and boxes of items that she had collected on her travels, as well as boxes and boxes of slides, which were all stored in what became the science lecturer’s office in the department.  They remained there for at least the decade that I used that office, and although not drawn on often, the contents provided subject interest for odd lectures and Open Days” Madeleine told us.

Despite the Extra Mural department having moved (and been renamed at least twice!) since Mary’s retirement, Madeleine was pretty confident that the University wouldn’t have thrown them away, and so put us in touch with current Director of Continuing & Professional Education at Cardiff University, Dr Zbig Sobiesierski to see if he could shed some light on where they might be now.

We were not to be disappointed by an almost immediate response from Zbig. Yes Mary’s teaching collection is still in the here, would you like to come over and see it?

Quick as a flash the Mary Gillham team went to the department’s new digs on Senghennydd Road to see this lost treasure. Zbig led us to a room and presented to us a shelving unit with 50 dusty boxes of shells and other artefacts that had survived their long-haul journeys to Cardiff, and, somewhat miraculously, a couple of moves within Cardiff itself. Covered in dust and with itchy noses we excitedly carried the boxes into our office to pore over the delights within.

Predominantly shells (with a sprinkling of driftwood, bones, seaweeds and rocks), there was material from across the globe: Norway, Kenya, Greece, Spain, Jamaica,  Zanzibar, New Zealand, the Seychelles, Bahamas, UK and USA, with some dating back to the late 1950s.

Whilst enjoying the presence of Gillham foraged shells and a sense that we had reunited two parts of the archive we realised that we need some guidance as to the actual archival value of the collection. So we contacted Dr Ben Rowson and Anna Holmes, are curators in the Mollusca department in the National Museum Wales, who gleefully came over to see the collection for themselves.

Ben takes up the story.

“As fans of Mary’s work we were eager to acquire something from her for the mollusc collections at the Museum, but this collection held a few surprises. Whereas we’d expected a little more in the way of voucher specimens for Mary’s local records, there were instead many beach-collected curios from her overseas travels. Among the usual Indo-Pacific seashells were a few specimens less commonly seen in collections, such as some Giant African Land-snails from the Tanzanian islands of Zanzibar and Mafia, and a juvenile shell of Syrinx, the Australian Trumpet Snail, an enormous adult of which has become one of our most widely seen props in recent years. The juvenile shows repaired damage, perhaps incurred by a crab, nicely illustrating how the early years are often the most dangerous times for such large animals.

An intact shell of the delightful Spirula or Ram’s-horn Squid (a staple of zoological teaching as one of the very few cephalopods to have a shell), was taken along with a fine string of egg-cases from Busycon, a Channelled Whelk from the USA. Some of these will be now be “re-born” as display or handling material once again, and used in our exhibitions, teaching and other activities (the theme of animal eggs being an annual favourite!). Others will be accessioned into the permanent collections, so that the National Museum will always have a few shells bearing the label “leg. & det. M. E. Gillham” to help remember her by.”

That wasn’t the end of it though; Teresa Darbyshire (Assistant Curator in the Marine Biodiversity section of the Museum) continues the story.

“After their perusal of Mary’s mollusc collection, Ben and Anna sent me some photos of the non-mollusca specimens they had found in her collection. There seemed to be some interesting and potentially very useful specimens there so I too went over to SEWBReC’s offices to look through the large, dusty pile of boxes to see what I could find. What I did find was a surprising collection of specimens not just from around the world but also from shores on our own doorstep, including examples of tropical calcareous worm tubes, sponges and sea urchins.

Coincidentally, I have searched our own collections in the last year trying to find examples of barnacle and worm tube-encrusted rocks or shells to use during outreach events with the public but surprisingly, sometimes it is these simple, highly visual and tactile objects that we don’t have as we concentrate on collecting individual specimens or the larger item is lost by virtue of the removal and identification of the individuals that make it up. Mary obviously collected and used such objects for exactly the same purpose as I am hoping to use them for now.

There were also some really nice, large examples of British sponges that will again be very useful for both outreach and display and are not items that are easily collectable. These specimens will now continue Mary’s legacy of teaching and education, hopefully helping us to enthuse the general public about the wonders of the marine world.”

“Amgueddfa Cymru-National Museum Wales holds at least 350 botanical specimens of Mary’s that we know of, but only one marine algae specimen (Wireweed, Sargassum muticum), so I was keen to see what seaweeds were in the collection of such an enthusiastic naturalist. Of the ~10 algae specimens in the collection, almost all are calcareous algae (incorporate calcium carbonate into their cells). In terms of storage in the herbarium, these hard seaweeds are ones that you would usually preserve in boxes or in fluid, as they would not easily press onto card.

For education, I took some Kenyan seaweeds that beautifully show the range of branching patterns and shapes that calcareous algae can create. I also took a specimen of Maerl that Mary had collected from Galway in 1979. Maerl beds are formed by a range of calcareous algae species, and are a fragile habitat that is now very rare in Britain and Ireland.

Mary donated botanical specimens regularly to the Museum from the 1950s to the 2000s, including ferns, gymnosperms, flowering plants, fungi, mosses and algae, reflecting her wide ranging interests. Given the extent of her marine collection, it surely seems likely that she would have kept a herbarium of her own as well – perhaps including some pressed seaweeds”.

So, in the space of a week we went from being unaware of the existence of Mary’s shells, to collecting them and having some of them enter the National Museum’s collection. Swift work indeed! The Mary Gillham Archive Project will use the rest to help illustrate Mary’s life and showcase the diversity of natural history at SEWBReC events.

We are glad that, after a near 30 year break, some of Mary’s finds will once again be used as educational and research tools… Now we just need to find Mary’s coco de mer...

The images on this page by Annie Irving, Katherine Slade and the Mary Gillham Archive Project 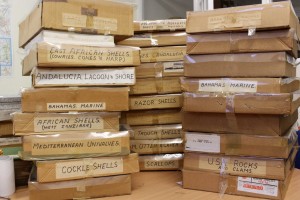 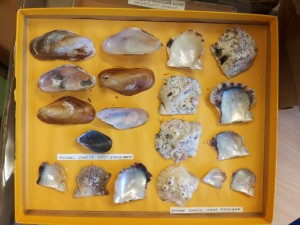 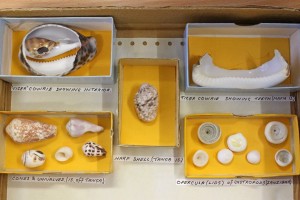 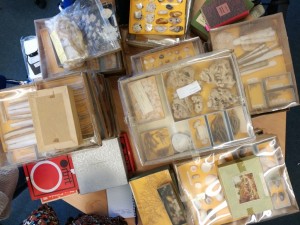 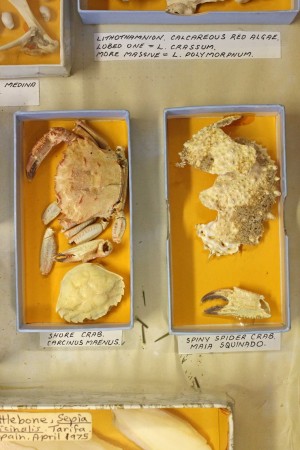 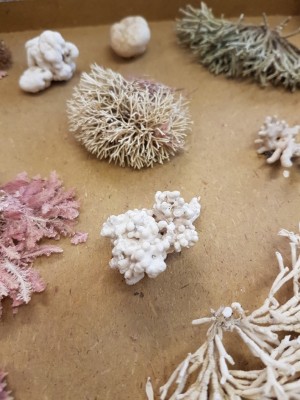 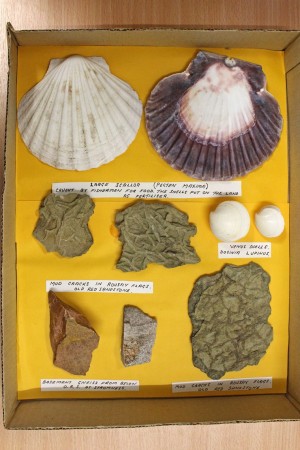 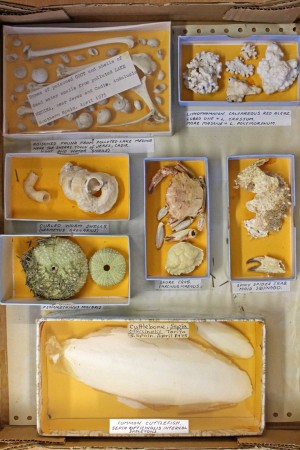 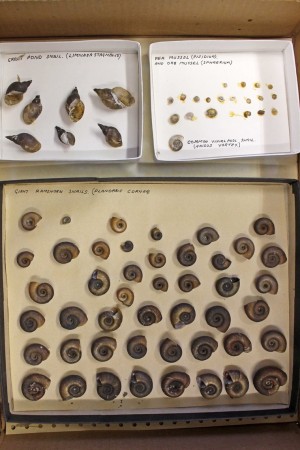 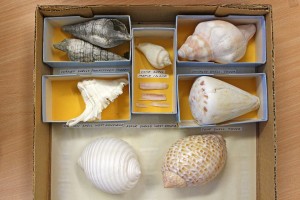