Botanists on the Burren and Inisheer 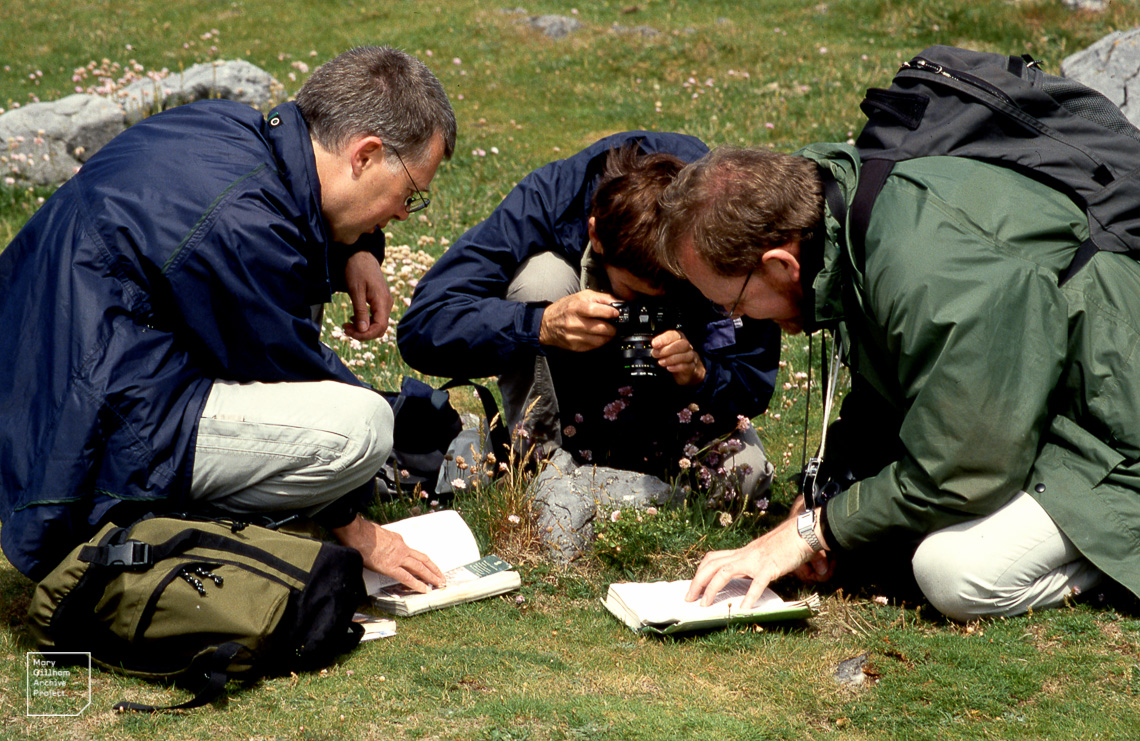 15 June 2006 Leave for Ireland. 3pm train Cardiff to Bristol and airport bus for Temple Meads. Arrive in Shannon c. 8pm. Taxi ride of one hour to Lisdoonvarna after snack supper at Bristol.

16 June 2006 Wind fierce throughout week. Day exploring main Burren, including Black Head. Fish lunch at Ballyvaughan on Galway Bay and back over the top Slieve Burren. 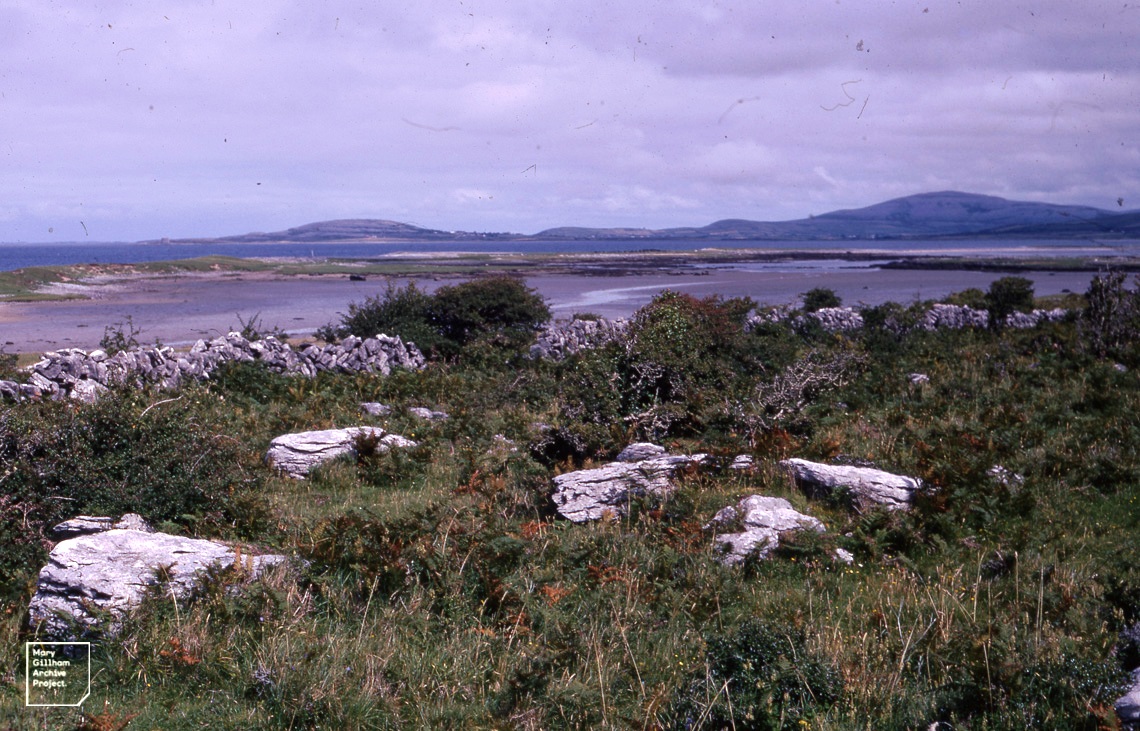 Burren in Ballyvaughan to Black Head area -- To Bally for crab lunch, mooch on pier. On to Fanore Beach where beach walk, back of dunes and back over near horses … throng of several thousand jellyfish stranded on the spreading sands and rocky reefs of Fanore Beach south of Black head … These were the common species (Aurelia aurita), the gonads appearing as four mauve arcs centred around the hub of the dome. 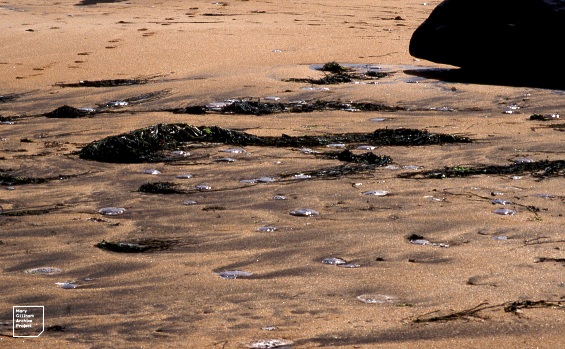 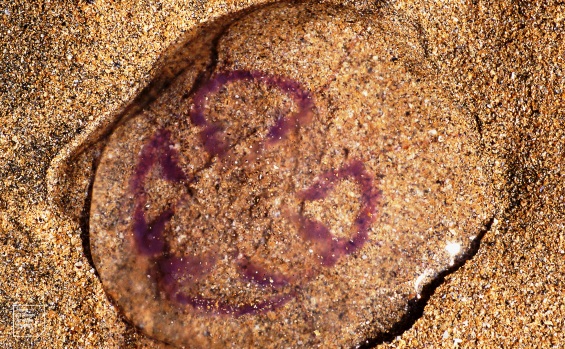 [Black guillemots] entranced us near Poulsallagh … [They] had returned repeatedly to a nook only just below the cliff edge but shielded from sight by a protruding ledge. After each circular flight they alighted within a few yards of several cameras that recorded their dapper black and white plumage for posterity.

Exploration of the delightful island of Inisheer was relegated to day trips: one in June 1979 and another twenty-seven years later.

[The day-trip to Inisheer Island was] a voyage of a short six miles from Doolin in County Clare … our voyage the first time [in 1979] had been of nine miles on an open fishing boat … ‘Tranquility’, our modern craft, was very different. Her under-cover seats were up holstered, as in a coach, set out in twelve rows, four each side of the central gangway with four more behind … Our party of botanists trundled down Fisher Street from Doolin in the bus that had been transporting us around the enchanted landscape of the Burren … 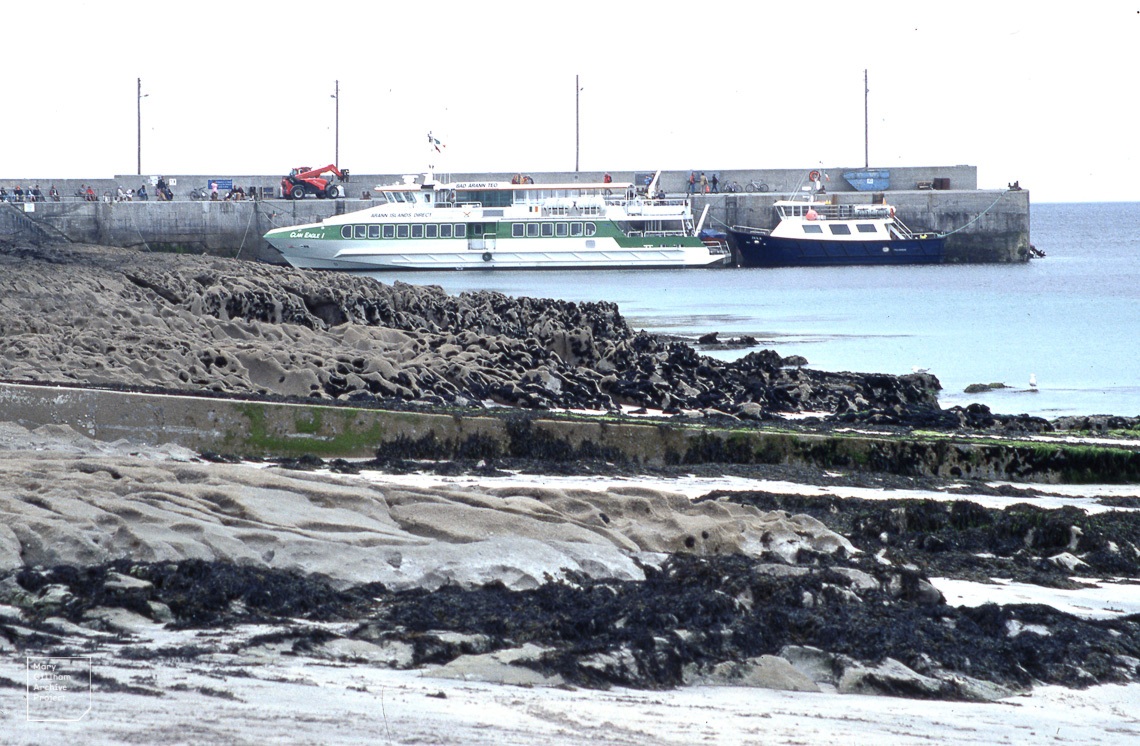 I was expecting changes [on Inisheer] with the burgeoning of tourism after all these years and changes there certainly were. Instead of a loose sprawl of thatched cottages, a whole little township had sprung up, with spanking new two-storey houses, tiled, rendered and newly white washed, spreading up the slope behind. 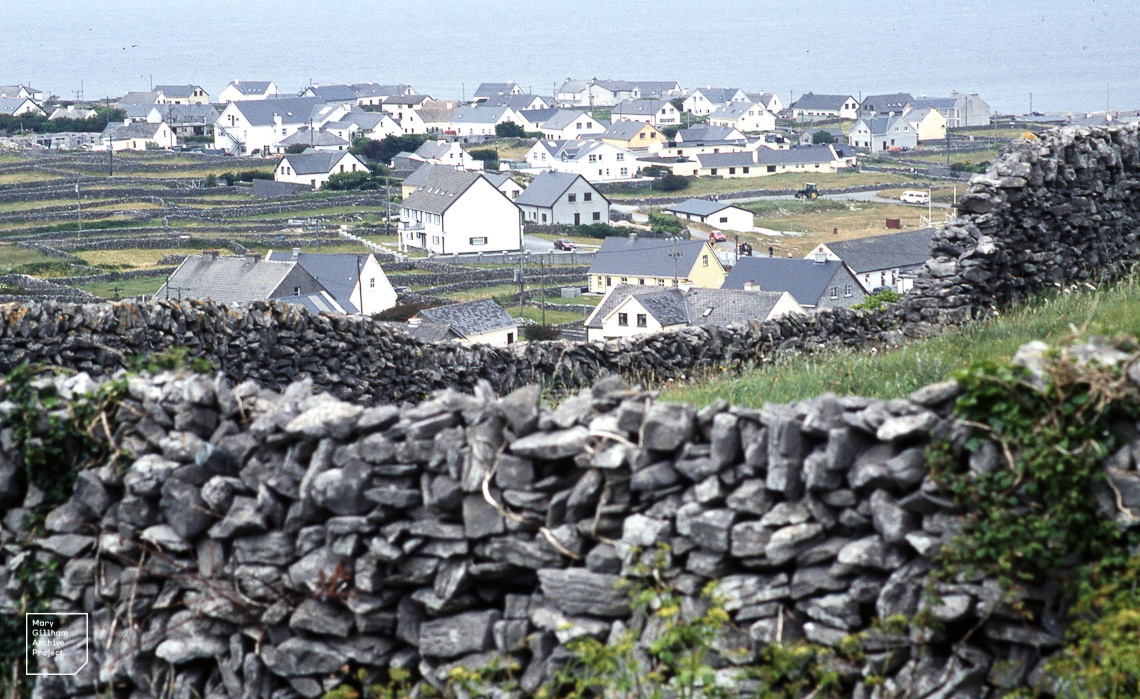 In place of the free range donkeys nonchalantly doing their own thing on the spreading sands, a small fleet of horse-drawn buggies queued to take new arrivals on a tour of sights. Last time the tiny donkey carts had carried only locals, but we saw not a single donkey all day. Remarking on this later to a farmer, we learned that donkeys now commanded high prices and had all been sold to the mainland and converted into cash. 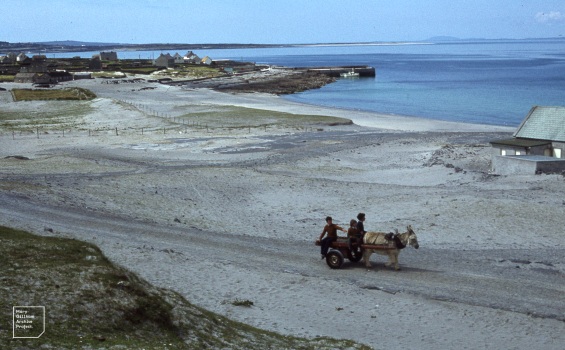 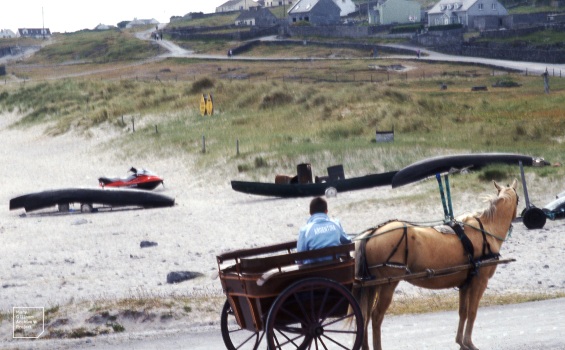 The small work horses drawing the jaunting cars came in every colour pattern ... There were eight such vehicles competing to take customers on a jaunt along the flat road skirting beach, air strip and elevated churchyard …

Upturned curraghs were scattered across the sandy beach as before, affording handy windbreaks for picnic parties, but the spread of sand was greatly diminished. 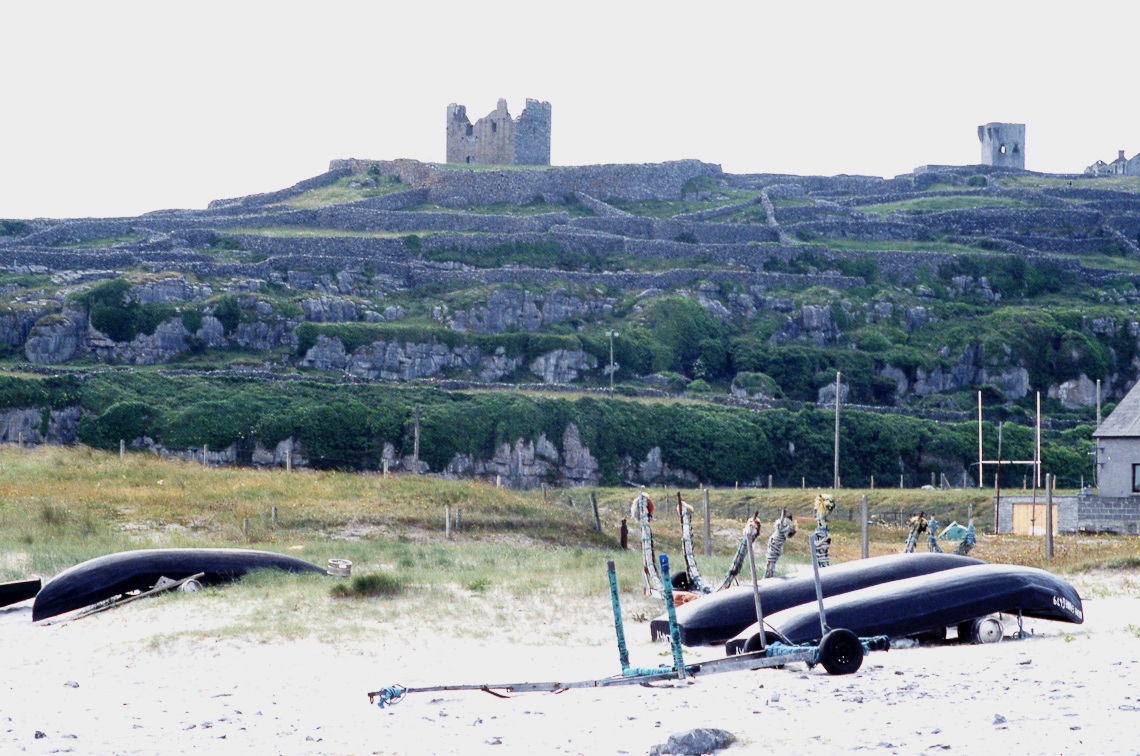 The elevated burial site reached via the new ramp and wrought iron gate is Teampall Chaomhain, the tenth century church of St Carvan or St Chaomhain, the patron saint of Ireland, to whom the islanders had turned in times of illness. Threading our way through the more recently erected gravestones, many in remembrance of members of the O’Donnell and Flaherty families, we were impressed at how much of the original stabilising marram grass persisted from the original dune building phase. 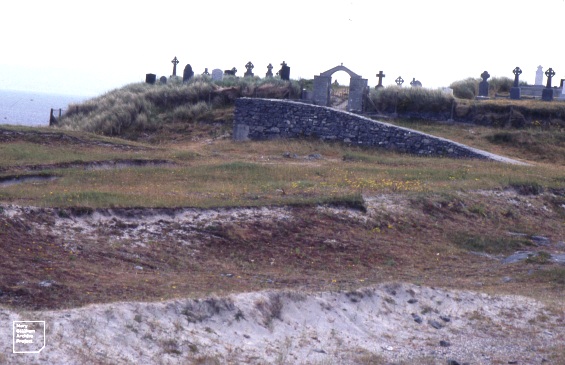 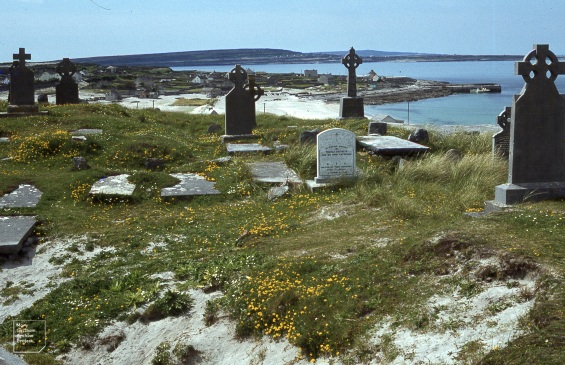 When the others turned back for a café lunch and visit to the craft shop I pressed on towards the south-eastern lighthouse … A few small plots had been planted with potatoes, now at peak of flowering. Others bore fully blown cabbages, smaller Brassicas, onions and frilly modern purple or green lettuce varieties. No cereals or soft fruits were seen, just the odd abandoned car or piled organic matter. 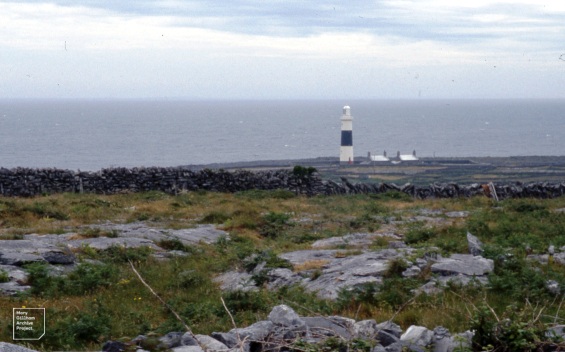 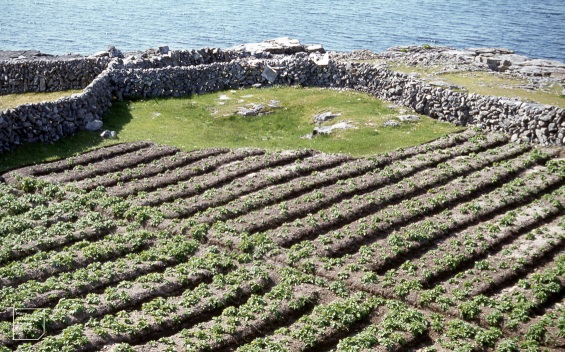 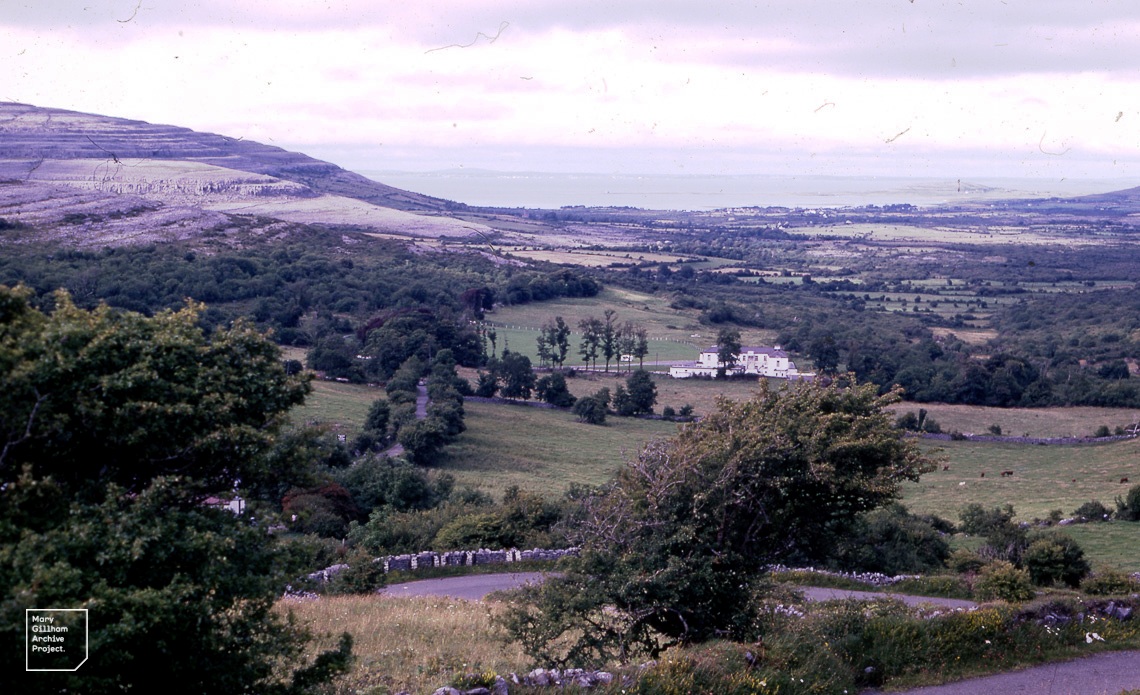 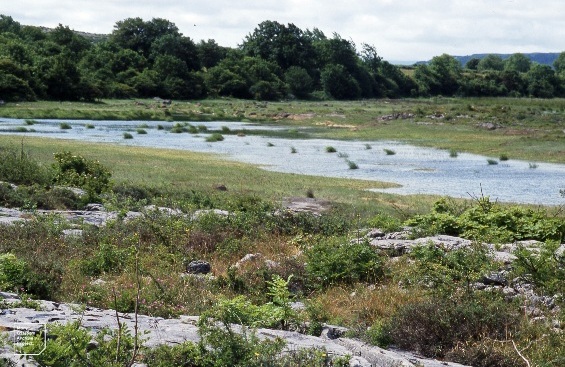 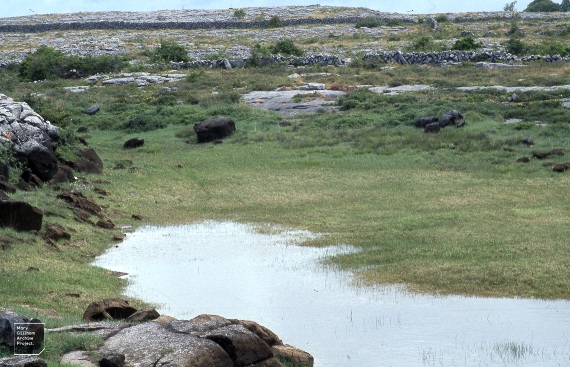 20 June 2006 Poured with rain all day. A bitter wind and thick mist. First stop was the Cliffs of Moher – second highest in Europe and should have been a high point. A long walk uphill on broad ballast past – securely fenced to line of Liscannor slates along cliff edge. Absolutely drenched and could only sere first two headlands of the cliffs. Most birds seen illusory, puffin guillemot, razor, kitti and fulmar with tysties [Black guillemot] at cliff bottom. Puffs low prom. 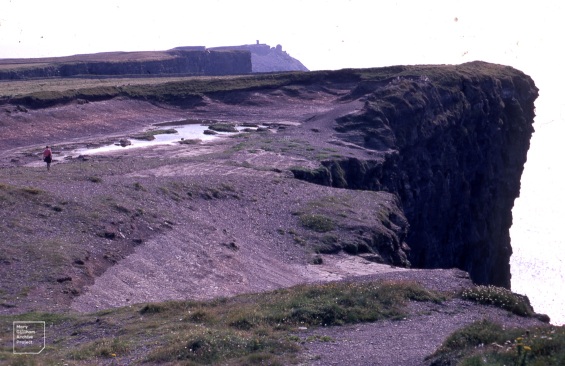 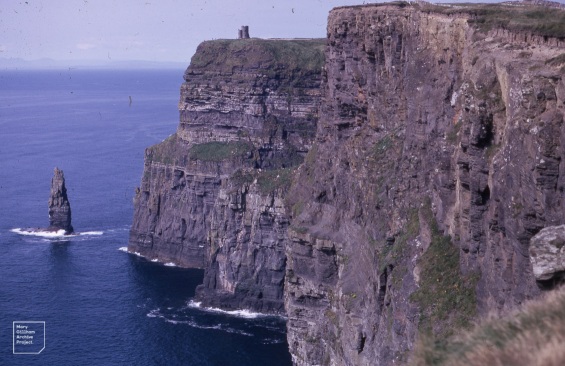 Army of cranes and diggers on the low-lying ground to the south where we used to go – where they were creating a Virtual Reality Moher Experience underground. Hundreds of wet tourists battling up the track and seeing nothing. Huge shop of knickknacks as everywhere. Great pile of coaches. So wet we had to go back to our B&B to change clothes before next session. Oh for the good old days! 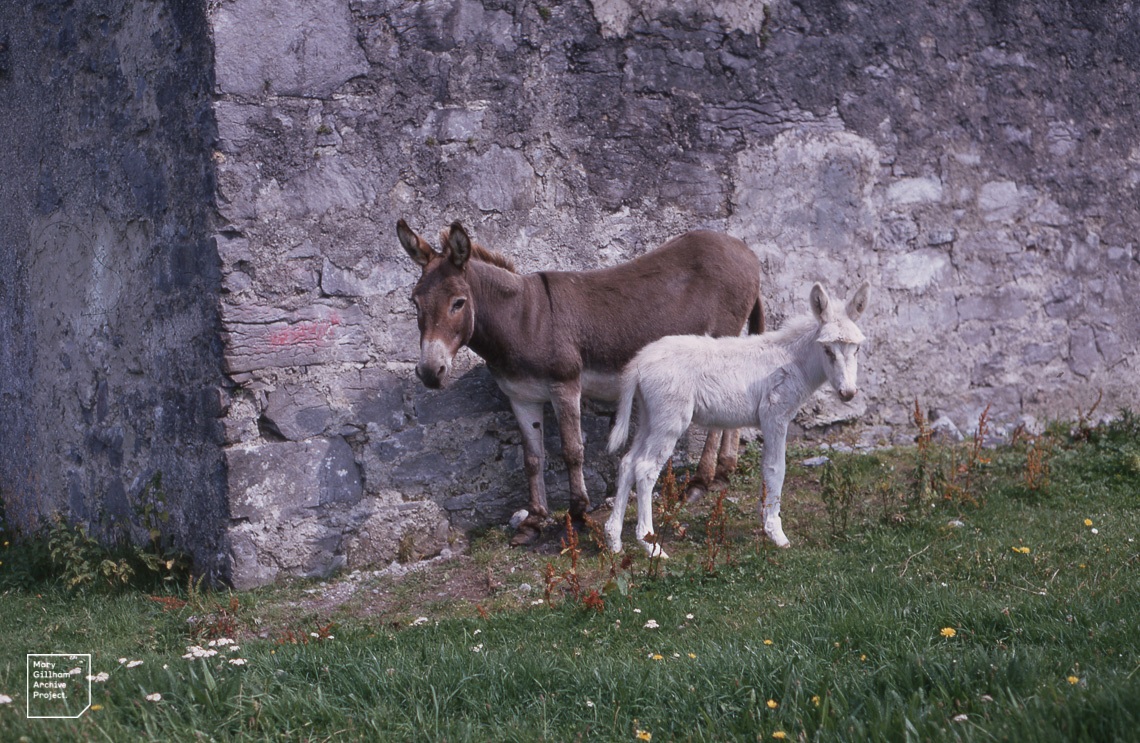 A disappointing day. 2 out of 4 now have rained throughout. After 3 weeks of heatwave following the deluges of Lundy!!

22 June 2006 AM exploring Lisdoonvarna Spa and riverside gardens. Left digs at 12. Afternoon in Shannon airport. 5.15 plane from there to Bristol.