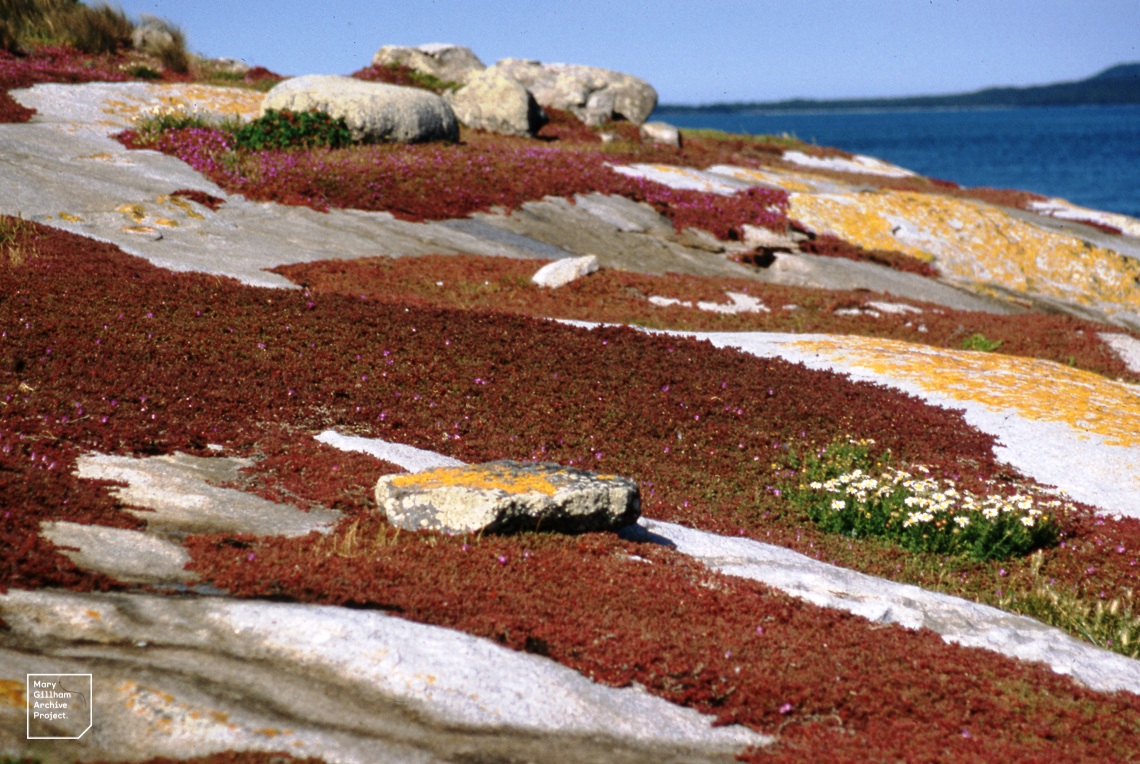 On her 1995 trip Mary spent much of her time with old friends. She flew in to Melbourne and explored the Dandenongs and the South Victoria coast with Prof. Gordon Preston and his wife Joan (née Owens) of Aberystwyth. She stayed with Ian and Hope (née Macpherson) Black,in Nathalia, and then headed off on an 850km road trip with them, with caravan in tow, west across Victoria and South Australia to Kangaroo Island and, after a four-day stay there, back through Victoria along a more southerly route, stopping to visit Brad Fisher, Heather Owens and family in Gellibrand, where they explored some of the sights in and around the Great Otway National Park.

Mary, Hope and Ian then headed for Tasmania, catching the overnight ferry from Melbourne to Devonport, and driving from there to Hobart to visit Adrian and Peggy Deane, friends from Antarctica. Driving along Tasmania’s east coast, the intrepid travellers enjoyed a couple of days exploring Bruny Island, braved a snowstorm on Mt Wellington, found the convict ruins at Port Arthur a sobering place, were rained off a visit to Maria Island, spent a couple of days investigating the area around St Helens, and drove on from there to Launceston. Joan Preston flew from Melbourne and joined Mary for a 5-day stay on Fisher Island, where Mary did a lot of her muttonbird research field work in the 1950s.

Mary rejoined Ian and Hope in Launceston for the ferry trip back to Melbourne, and from there Mary flew home, via Sydney and Bangkok. 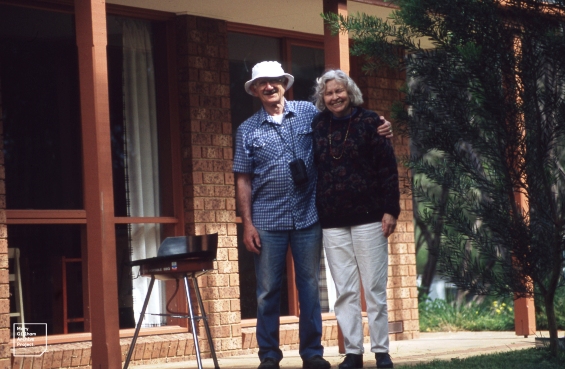 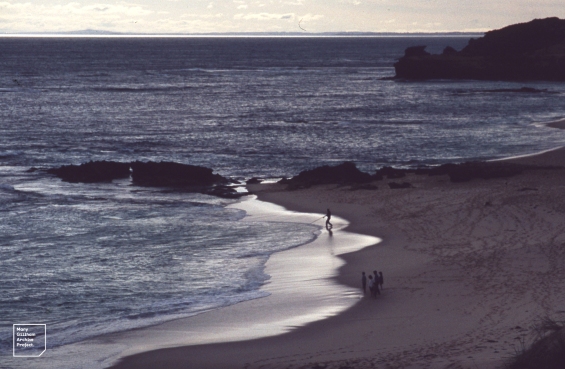 Above left, Gordon Preston, maths professor, and wife Joan (née Owens), at Blairgowrie, and, right, near London Bridge, Sorrento, on the Mornington Penninsula

The archive contains Mary’s notes, both travel and botanical, from this trip, and her photos are available on Flickr.

Below is just a brief sample from her notebooks:

Thursday 5 October [With Gordon and Joan] Left Melbourne c.9.45am. East side of Port Phillip Bay. Art gallery in Sorrento. In to delightful second home among tea tree on dunes at Blairgowrie … Walk with Joan to Ocean Beach …

Saturday 7 October To Sorrento at 11am. 40 minute walk along beach …On car ferry by 12. Crossed to Queensferry on west shore of Port Phillip Bay … Drove along the Great Ocean Road outside the Ottway Mountains. Magnificent winding road in and out of fabulous valley entrances, sandy beaches with low broken rocks, sun out here and sea a tropical sapphire … 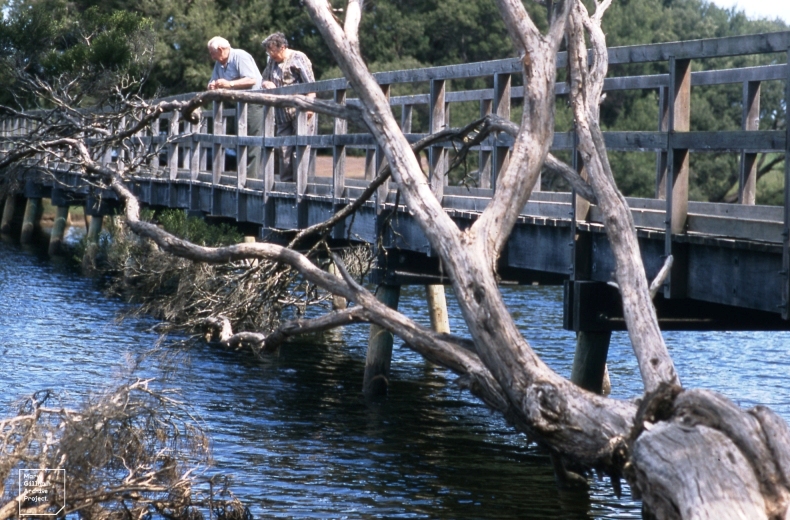 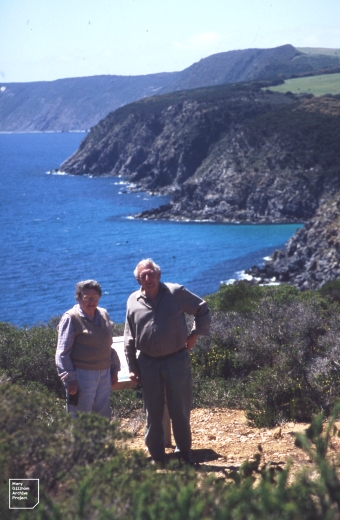 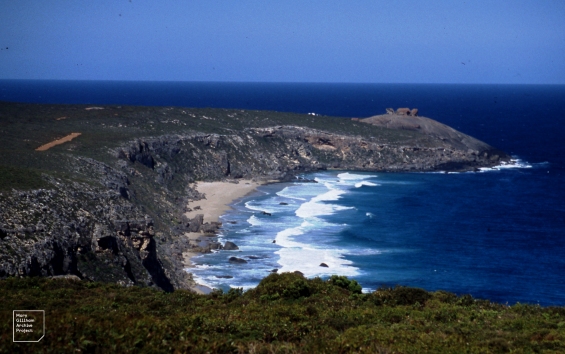 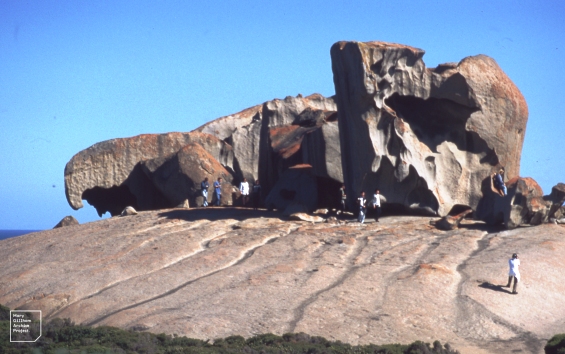 Above left, view to Remarkable Rocks, and, right, a closer view of that amazing rock formation, at Flinders Chase on Kangaroo Island.

Monday 6 to Saturday 11 November [Mary revisited one of her favourite places in the world, Flinders Island]
“They had an inch of rain on Flinders in 9 hours last night”. This while helping myself to more hot coffee from the urn in the waiting room (no stewardess on these flights, where gaining one’s seat is a matter of “bend and squeeze through” ) … We bucketed up through the thick layer of low cloud, with glimpses of damp green fields and Launceston … menacingly dark waters of Bass Strait flecked with foaming white horses … The accommodation was the Lady Barron Motel, but warden’s wife had been doing up an old house next door as a holiday home, and Joan Preston and I were to stay here … Joan arriving from Melbourne later in the morning … proceeded to Derek Smith’s tumbledown house … reminisced over past acquaintances “We’re almost the only two left now. Dom, Eric Worrell, Tas Drysdale all gone.” … Doreen Lovegrove, volunteer curator of museum, and we had six hours together at Lillies Bay …
[Wednesday] Land rover trip all day up west coast to all bays and points and round to northeast river with Lindsay Luddington … Marvellous … Winaroo Nature Reserve – an area of low heath full of flowers … many croaking frogs as much of the area was boggy … Killiecrankie Bay where folk dive for topaz … North-East River, a little lighthouse and concrete helipad, smooth flat granite faces … Dock, a fantastically beaut bay of heaped granite monoliths, painted with orange lichens …
[Thursday] Fabulous calm sunny weather till sea mist mid afternoon. A.m. trip of the trip to Fisher Island and Great Dog Island … James took us two at a time to Fisher in the little inflatable dinghy with outboard motor …’Yolla’ still stood four square to the winds, newly painted in camouflage green … Reef Island was as thick with birds as ever, white-fronted black-faced cormorants thick on rocks and Pacific gulls as thick on pigface … [on Great Dog Island] The [muttonbird] huts in a dreadful state of filth … The market has dwindled because of a revulsion of people to the trade and a general dislike of the taste, according to James … afterwards view and lunch on Vinegar Hill, then Petrifaction Bay after Cameron Inlet.
[Friday] Joan left on the mid morning plane to Melbourne … [Saturday] Hope and Ian picked me up off the Flinders plane at Launceston mid morning. 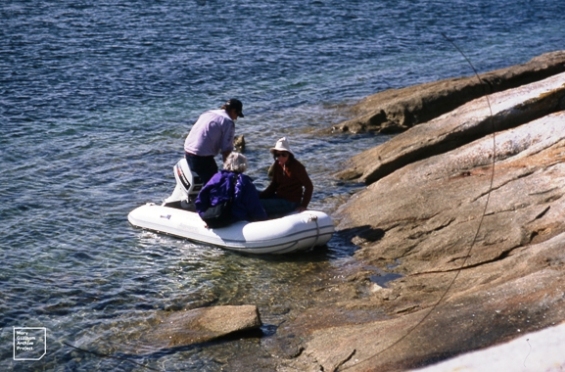 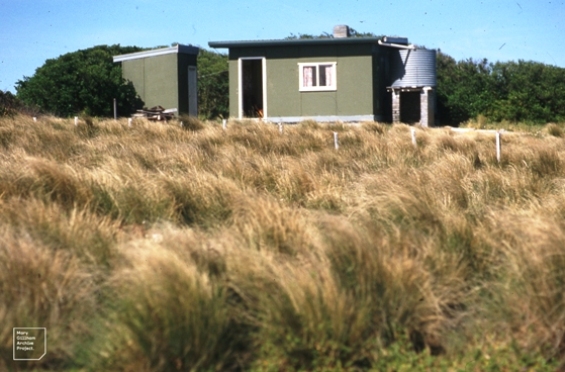 Above left, James Luddington lands Doreen Lovegrove (museum) and Joan Preston on Fisher Island, and, right, 'Yolla' ablutions block, Fisher Island. ['Yolla' is the aboriginal word for muttonbird and this hut is where lived when conducting field work on Fisher in the 1950s.] 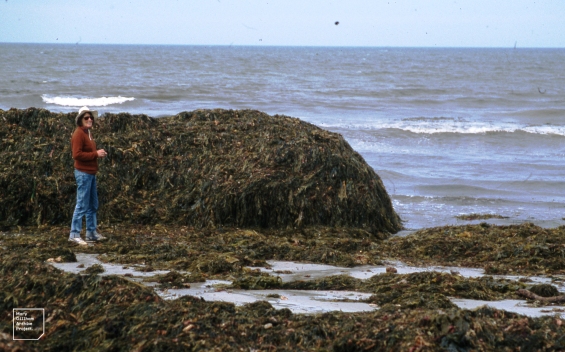 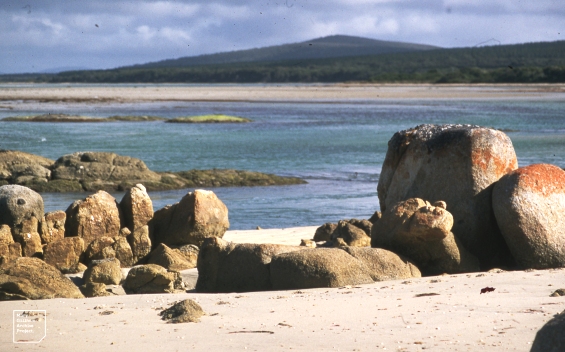 Above left, Doreen Lovegrove amidst the aftermath of a northeast gale, at Cameron Inlet, and, right, the view across the mouth of North-East River, Flinders, November 1995.