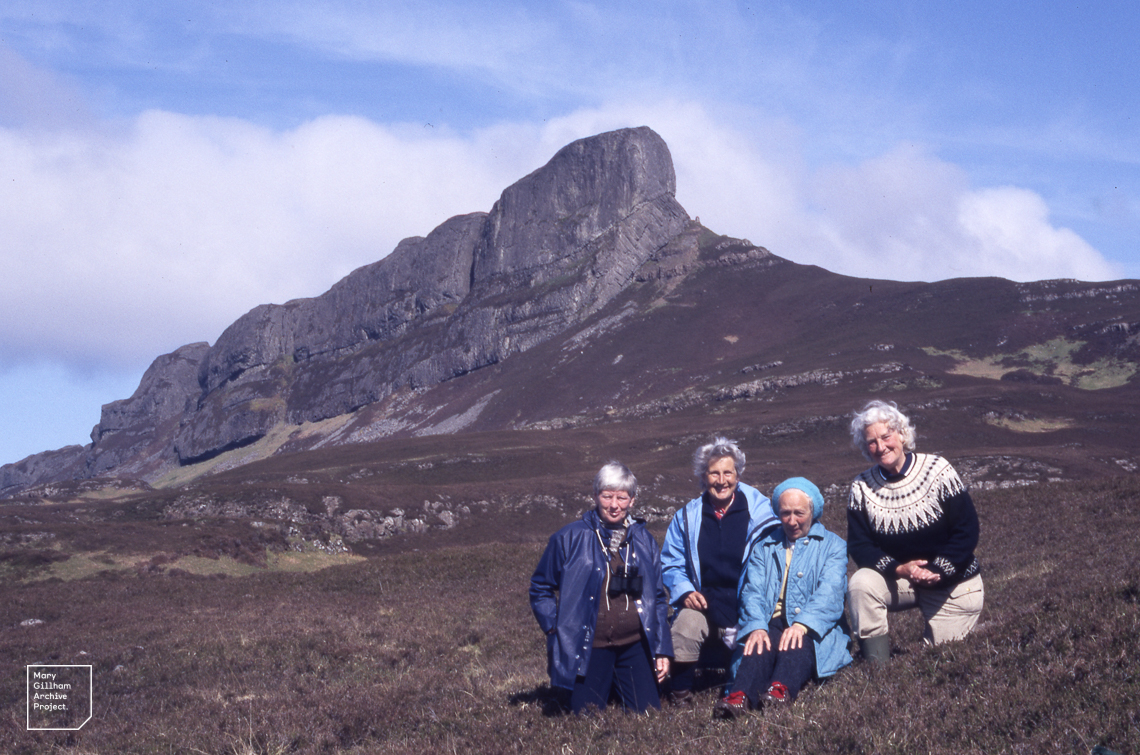 On Tuesday 3 July 1984 Mary gave the following talk to the Welsh Tutors Conference:

University College Cardiff is as you know, celebrating its centenary this year, so John Davies thought it appropriate that EM’s ‘oldest inhabitant’ should be asked to reminisce. His beady eye alighted on me.

I can’t remember back quite that far, but seem to have been around for a fair while, spreading the gospel of the great out-of-doors, as extramurally as the vagaries of our climate allow.

Coming in the autumn of 1962 from the healthy 50:50 ratio of arts and science in internal university teaching, I was astonished to find that I was to be the first full-time science appointment in EM in the whole of the principality …

I asked Iwan Morgan, our director, tentatively, in 1962 how I should proceed. His instructions were concise and to the point: ‘You’re the biologist; how would we know?’ How indeed!

I fell back on my experience as a teacher of undergraduates and made the usual mistake of being too academic. A glassy eyed pall settled over the unfortunates who endured my first course of ‘Botany in six lectures’. Their questions showed no grasp of the basic essentials. I was gilding the lily before I had grown it.

What these aspiring amateur naturalists wanted most was to observe nature in situ – to examine flowers with a hand lens, train their binoculars on birds in the field, try to grasp the complex interrelations of the world about them by observation and deduction.

I did my best to put specimens in their hands, but this was not easy when evening classes occupy the six winter months, plant growth and bird breeding the six summer ones.

I returned to the director. ‘Can I do field work?’ His mind’s eye wavered across a field of cereals, a Fordson tractor ... ‘What’s that?’ Of course, he wouldn’t know. Clearly the image of the toiling, down-to-earth countryman had to be replaced by the investigating, feet-on-the-ground townsman … 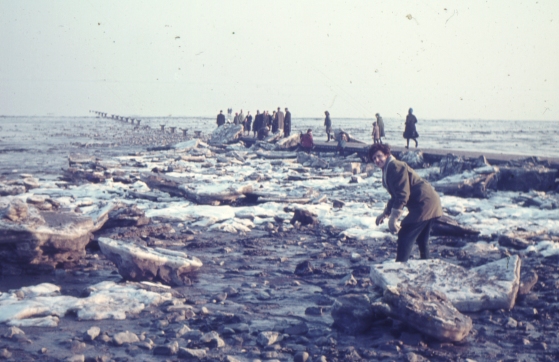 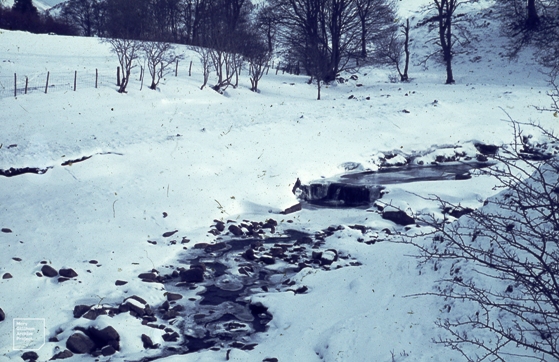 My inaugural winter was that of the great freeze-up, 1962-63. Starved of biology as they had been, I assumed that the population of Cardiff would be rearing to go as soon as the courses were advertised. I scoured the countryside for part-time tutors and produced an exquisitely illustrated brochure promoting all sorts of goodies. These ranged from ornithology to insects, from trees to lichens. Unfrightening titles were thought up: ‘Soil, plants and man’, ‘Life in fresh water’, ‘Ecology of the Pembrokeshire Islands’. All was set for a fine start.

But I had overlooked two facts. Our mailing list was of an arts public, not a science one, and most with any scientific leanings were either snowed in or frozen out, grateful for their fireside TVs.

Many of the courses failed to get off the ground; some teetered along with a faithful few. The only one to attract a big audience was the least specialised, the most field-orientated, a series of natural history travel talks, starting, appropriately enough, with my experiences in the Antarctic.

Obviously interest had to be awakened in the living organisms before people wanted to probe too deeply into the theory of how they ticked. Field courses must be inaugurated as the sprat to catch the mackerel.

And so it all began.

In the first summer of 1963 I was inundated with vast shoals of sprats, only a modicum of whom survived to grow into mackerel.

Twenty years later, in spite of the rising prices of residential accommodation, times have scarcely changed. If I have a waiting list, it is for the summer field courses, not the winter indoor ones – which is entirely appropriate for an EXTRAmural department which, until 1963, had been wholly INTRAmural.

I felt I was getting somewhere when letters came for me addressed to the ExtraRURAL department, even further when they were directed to the ExtraMORAL tutor.

My fluctuating shoal of sprats has swum around the world since our first residential week at Orielton in South Pembrokeshire in 1963: across the Caribbean to Jamaica, across the Atlantic to New England, Galway Bay to the limestone pavement of the Aran Isles, the North Sea to Norway, the Bay of Biscay to Andalucia, the Mediterranean to Morocco, and the Indian Ocean to the Seychelles, losing some and recruiting others as it goes. 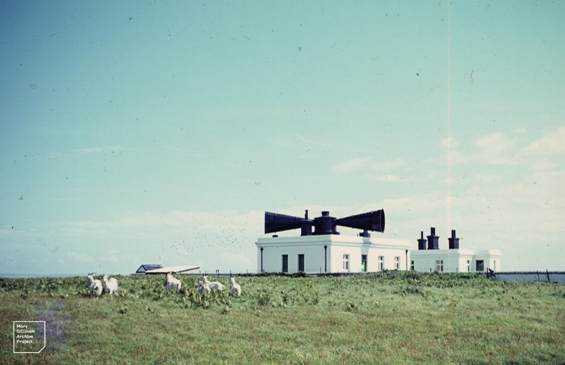 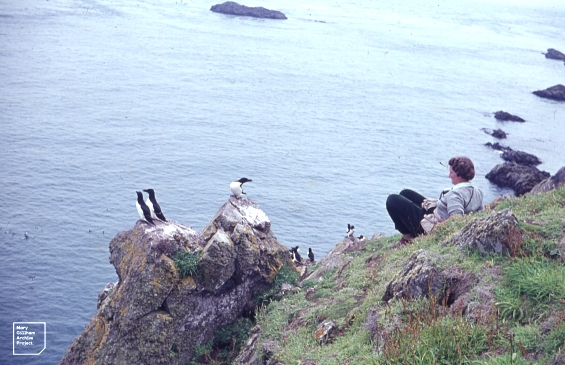 Britain’s first National Nature Week fell in May 1963 and we laid on a full week’s programme. Average attendance at the evening field walks was 64, at the lectures 100.

I advertised a day excursion to the Flatholm Island gull colony and got 90 takers for a boat holding 40. We duplicated, and the fact that the sea was too rough for the second party, which had to deploy itself on the mainland, dampened its ardour only slightly. A subsequent visit to Steepholm proved equally popular.

So readily, indeed, did the day excursions catch on, with numbers little diminished in even the foulest weather, that I soon had to temporarily abandon them. One tutor trying to cope with 70-80 eager beginners in the field can readily degenerate into a free-for-all, and there was a singular lack of field men willing to help. Most of the part-time tutors were more at home in their labs.

I curtailed numbers by concentrating on weekend courses, from Friday morning to Sunday teatime, at residential centres around Cardiff, and as far afield as the Cotswolds and central Wales. The more distant ones proved the most popular, students cheerfully travelling 120 miles, those with cars giving lifts to those without. The idea soon caught on. Taking 1968 as a specimen year, we enrolled: 41 for Ornithology at Greynog; 31 for Geology and Botany at Aberystwyth; 55 for Flowering plants at Gower; and 41 for Plant ecology at Aberystwyth …

Illustrated lectures on the Friday and Saturday evenings seek to elucidate the areas to be visited the following day, to give a framework into which direct observations can be fitted. Members come equipped with waterproofs and gumboots, rainproof sandwich box and thermos, and manage to look interested in the dreariest weather. If it gets TOO deplorable, we gather specimens and retreat to improvised indoor sessions …

No amount of theorising in the classroom can give quite the same thrill as the first fleeting glimpse of a roe deer, the sight of a dragonfly struggling out of its nymphal case, or the aerobatic spectacle of tumbling choughs …

I quote a snatch of conversation overheard from the lobsterman’s hut at Martinshaven, where people where changing into dry clothes after a particularly exciting run back from Skokholm:

Newcomer, who had catapulted into the bilge water when the boat cannoned into a rock, injuring the skipper, who had hopped out with the painter: ‘Does this happen often?’

Oldtimer, who had taken over and found himself lying in the shallows with a coil of rope on his chest: ‘Good God, yes. Anything can happen on an Extramural trip!’ Which is, surely, what life and experience is all about.

Field weeks in Britain proved as popular as weekends. In 1963 we explored the milestone cliffs and lakes of south Pembrokeshire from the Orielton Field Centre, in 1964 west Pembrokeshire from the Dale Fort Field Centre. In 1965 the Lake District yielded not only lakes and mountains, but the sea-bird colonies of St Bee’s Head cliffs and Walney Island dunes, working from Brantwood on Lake Coniston. In 1966 we battled with Easter-time snow, ice and rain from Sussex University’s field centre in Ashdown Forest. Later in the same year we enjoyed a week of peerless sunshine and seabirds on Skokholm. In 1967 we stayed at Keswick Hall, Norwich to visit the wealth of Norfolk’s nature reserves, penetrating south to the avocets of Minsmere and west to the stone curlews of Breckland. In 1968 we undertook a week’s marine biology at St Agnes in north Cornwall and a spell on Guernsey, Alderney, Sark, Herm and the Humps, where the seabirds nest, ‘helping’ David McClintock with the new Channel Island Flora that he was producing … 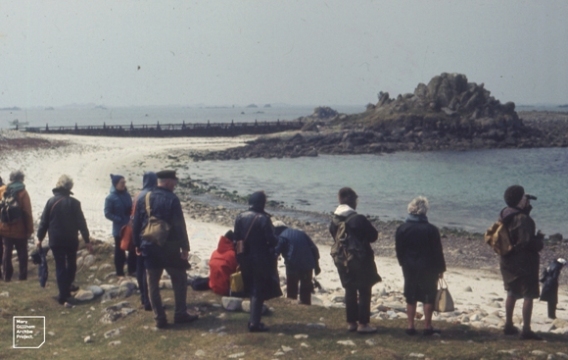 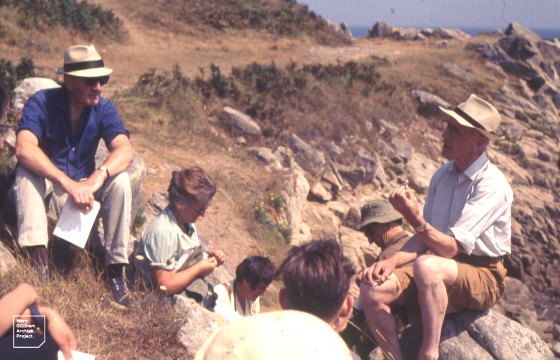 Study tours abroad were the logical end point of this sequence and we launched into our first at the beginning of the second summer. Our 1964 excursion was in a cortege of private cars to Provence to study birds on the Camargue, maquis vegetation and marine life on the Mediterranean coast, and mountain flowers in the Maritime Alps.

The next year (1965) we visited Austria, sharing time between the flowers, eagles and ring ouzels of the alps and the great bustards and other plains’ birds around Neusiedlersee. Out third excursion in 1966 was to Norway, to trace the sequence of flora and fauna from the fiord-level montane coniferous forest, through the sub-alpine lemming-filled birch scrub to the Arctic-alpines and reindeer of the high plateaux. January 1967 saw the most ambitious to date, to Jamaica, to look at coral reefs, tropical birds and every conceivable type of vegetation, from the organ-pipe cactus flats of the coast to the rainforest of the mountains. In August of the same year we spent a full month on the island of Rhodes in the east Mediterranean, snorkelling and tramping the arid slopes after birds and plants, and seeing the fruiting phase of crops and flowers more commonly viewed in the spring, as on our Easter 1969 study tour of Corfu off the Albanian coast. 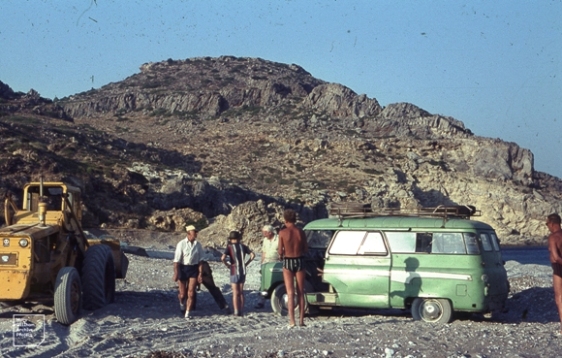 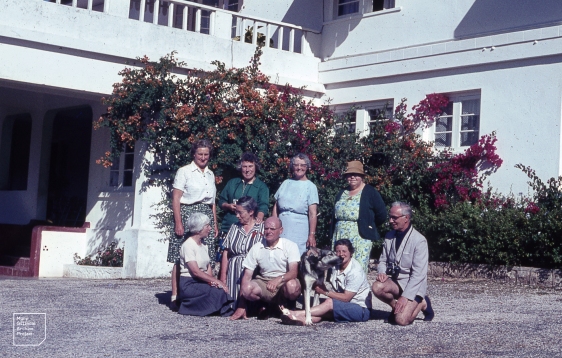 Devaluation upset our Iceland plans for 1968 and we spent a fortnight instead in Scotland, divided between the Western Islands and the Eastern Highlands.… 1968 was not the first (or last) time the department had biologised in Scotland. In 1967 we had undertaken a survey of a stretch of shore and the adjacent seabird islets in Lock Sunart, an area already designated as an SSSI but needing more information to qualify it for national reserve status. Participation by amateurs in field surveys gives students a sense of achievement, even if they learn less in total than on a ‘teaching’ trip …

Summer evening classes are normally held in the field, and we attempted to make some of these more erudite in 1967 and 1968 by launching out on a ‘Commons Survey’. This was structured as part of the general quest for information which followed the Commons Registration Act. If commons were to be preserved from enclosure and exploitation or destruction, the more facts available regarding their intrinsic ecological value the better … [the students] gained a certain satisfaction from feeling they were contributing, however inadequately, to a definite project … [we showed] the newcomers that there can be purpose as well as pleasure in understanding soil : plant : animal relationships …

Such people who follow up lectures with reading and practical work, and bring obscure specimens in for identification, compensate in part for the classes in new areas which fail to get off the ground. Because of their newfound interest, their children, too, are ‘learning from life’, and becoming better fitted to be part of the body of public opinion which future generations will need if conservation measures are to prove effective in safeguarding our diminishing natural environment.

… direct contact with living organisms, plant or animal, appeals to the young at heart of all ages. The urge to ‘commune with nature’ may have lain dormant for many years under the time-consuming constraints of earning a living and rearing a family, but it surfaces more and more in those who wish to remain sane and balanced in this crazily over-mechanised world.

It was a fifth-year member of one of the old Monmouthshire classes who summarised the role of the extramural tutor as he saw it: ‘You keep us out of the lunatic asylum’.

If enough teachers can foster an understanding of the intriguing intricacies of life cycles, the delicate poise of ecological relationships and man’s place in the ecosystem as a whole, we may just possibly survive that much longer and more happily as a race, headed, like all others, for eventual extinction. 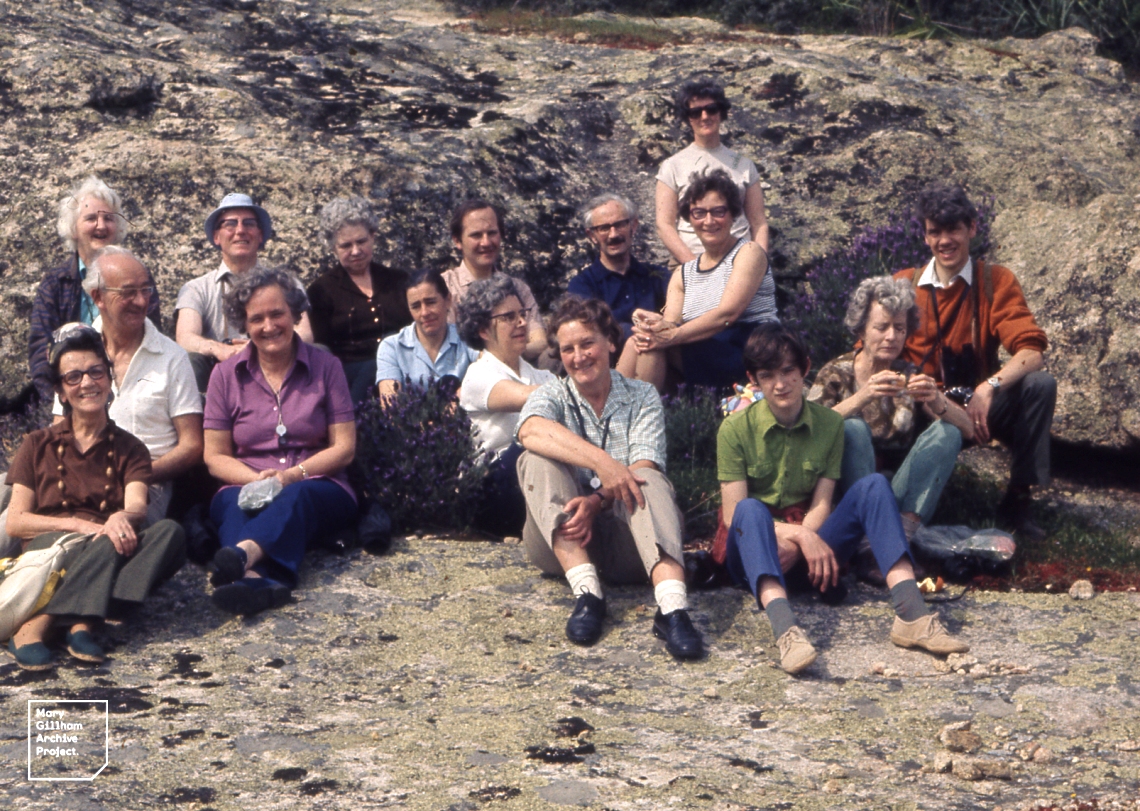