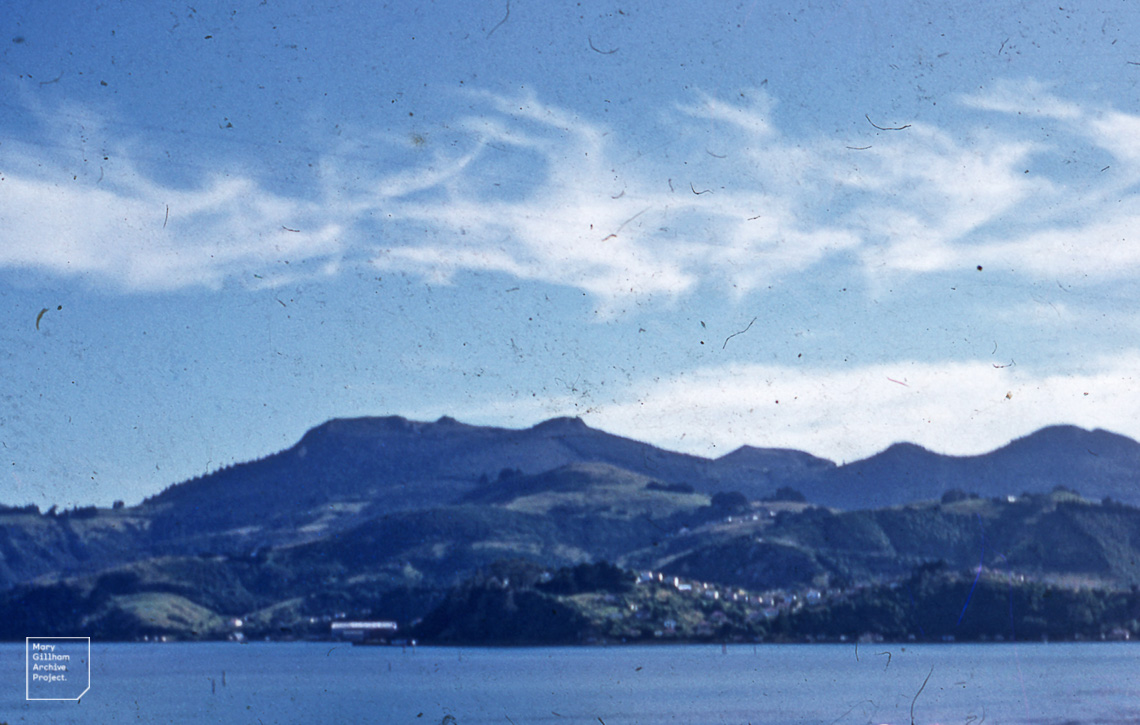 Mary travelled to Dunedin, in the South Island, ostensibly to attend the ANZAAS (Australian and New Zealand Association for the Advancement of Science) conference but also to spend as much time as possible exploring the flora and fauna of the Otago Peninsula.

Tuesday 15 January 1957
Another sunny, very full and interesting day today … commencing with a bus journey to Portobello. As arranged by phone the previous day, I was met by Stanley Sharpe, wildlife ranger for this part of the country, who had promised to show me round his territory (I gathered I was very honoured as he seldom conducted people round and often refused permission for them to visit on their own – but to me he could not have been nicer and he finished the day by driving me right back to town [14 mls – 28 return] and offering to take me out again on the morrow). 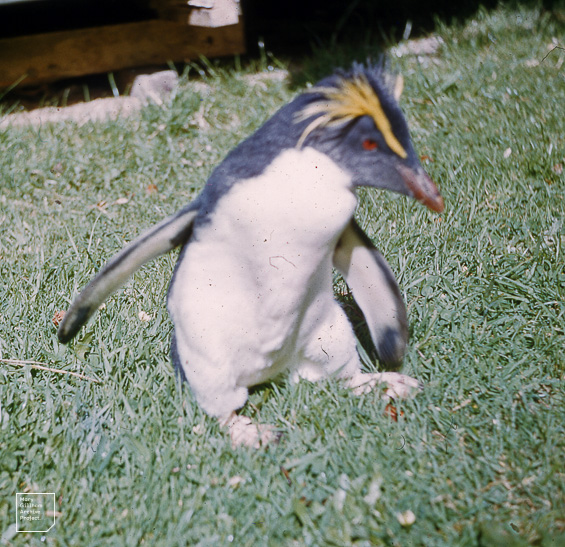 We went first to his house where a yellow-crested penguin was being kept temporarily, while an injured leg and flipper healed, and I had an excellent close-up view and description of habits etc, also some photos in one of which the penguin was sparring with a fluffy kitten. The bird was no bigger that a blue penguin (much smaller than the yellow-eyed), had brown eyes and two conspicuous trailing yellow crests, one above each.

From Portobello we set off by car, with his two small sons, for the albatross colony at the end of the Otago Peninsula – a lovely drive.

... We continued to the very tip of the Otago Peninsula where the famous colony of Royal albatross was nesting (the only mainland colony). These were jealously guarded by Dr Richdale and ranger Sharpe and the headland on which the six pairs of birds nested was cut off by a 6ft barbed and mesh fence inturned and unscaleable.

The no exit rule had been broken only for Peter Scott, and his wife left outside. When the Queen and the Duke of Edinburgh were here the mayor had to take it into his own hands to break the padlock (so the lady mayoress told me later). Richdale was exceedingly unpopular with everyone but Ranger Sharpe.

The birds were of the Chatham Island race with one odd female from the Campbell Island race. In previous years one pair had bred outside the enclosure but never succeeded in rearing a chick but this year they had not.

I was fortunate, however, in that a lone male was sitting out on the hillside and we were able to watch it at close quarters for almost an hour – he, having no natural enemies, taking little notice of us although there were no nesties to hold him.

A magnificent creature with the largest wing span of any flying bird (10’ 6”), the South American condor ranking second. They feed largely on squids which they caught on the sea’s surface. 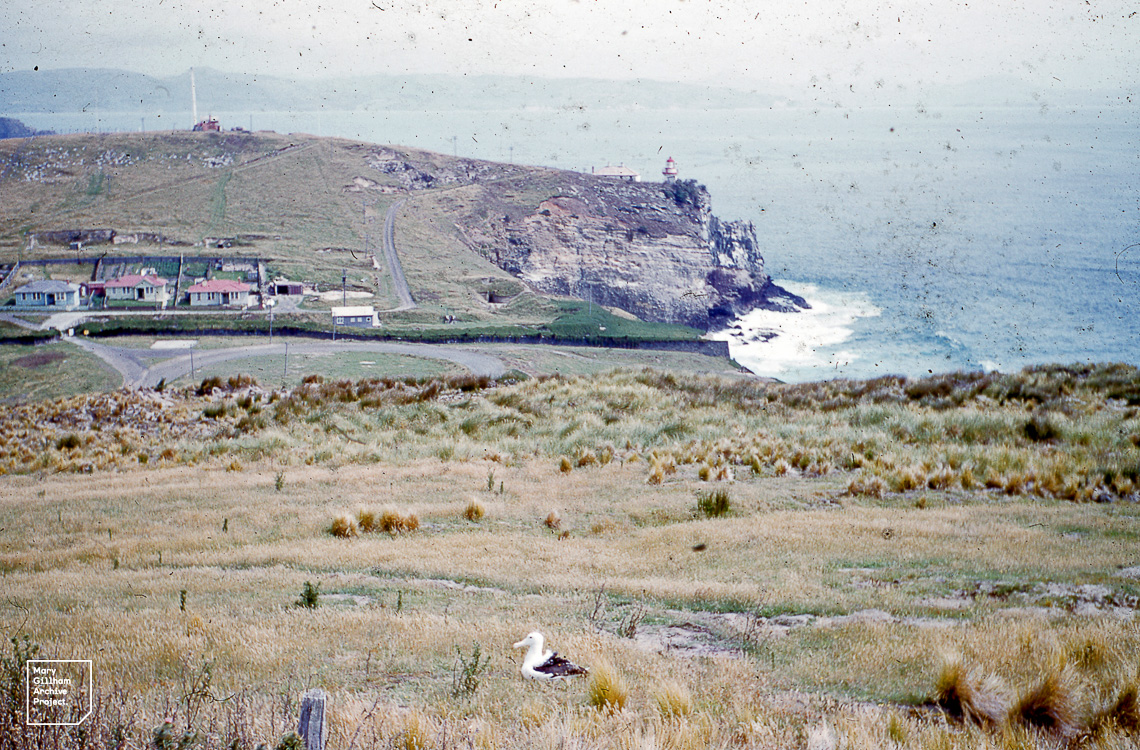 Leaving him, we inspected the old outside nest site and, from a distance, the nests of a large colony of grey shags on the steep cliffs beneath the lighthouse. I learned much of the history of the albatrossery – of the extermination of vast quantities of rabbits and subsequent growth of grass which was so long and wet that the few survivors had a high death rate from pneumonia, and was regaled with many tales of my guide’s wide bush experience, shooting stags, scrub bulls, wild cats (48 in a single penguin colony) and stray cattle and sheep which, in spite of warnings, were allowed to roam into the various sanctuaries in his charge, eating and destroying the cover and ripping plants out of the sand dune sanctuaries. He had certainly had some wonderful experiences since he had given up life as an engineer and become a ranger but, sound character though he undoubtedly was, one suspected that he made the most of exploits in the telling.

We returned to his house for lunch and then … set off in another direction for Sandfly Bay to yellow-eyed penguins. The route afforded some fine views before we drove into a farmyard to park ... 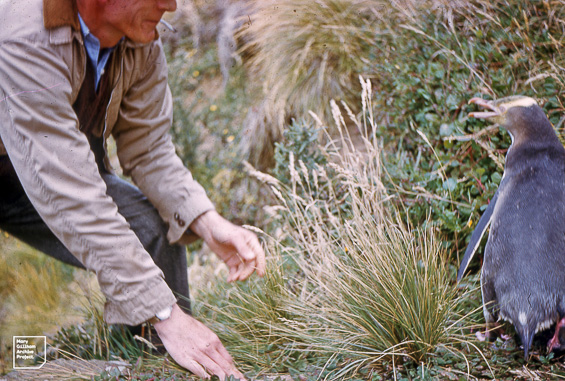 We crossed low-lying farmland with 1-2ft high earth tussocks topped with a sedge ‘cutty grass’ like many other NZ monocots including the ‘Spaniard’. Then into dense scrub of yellow lupin and hemlock, 8-10ft high …

From the lupins we emerged onto sandhills ineffectively stabilised by marram grass and huge blowouts. (‘Sandfly Bay’ because of flying sand – not sandflies.) Over these and barefoot along a flat sandy beach where black oystercatchers were feeding, larger than the much more common pied and with rounded more portly chests. Then on to the rocks and along the front of a cliff where 23 pairs of penguins nested, mostly on the grassy slopes beneath the big Phormium rosettes.

Saw many pairs of chicks and adults among the rocks in fairly open situations just above beach level and got some excellent close up shots with the camera as they bothered about us very little and allowed the ranger to catch them.

Fascinated by the reception of the returning parent by the young and their reactions when food was not immediately forthcoming.

Saturday 19 January 1957
[Previous day’s diary: Coffee and more food, and while browsing around the museum at 10.30pm I was contacted by Dr Falla who offered me a coveted trip on the ‘Alert’, starting at 4.45am on the morrow – six hours on. Needless to say, I jumped at the idea although it meant missing the botany trip to the Catlins south along the coast for which I had paid 32/-.]

I duly rose at 4.30 and was picked up outside by a young man in Captain Black’s car who took me to the ‘Alert’, whose engines purred beside the jetty. Twelve of us altogether including Dr and Mrs Falla [Dr Falla below left], Mr and Mrs Turbott (the bird book writer of Auckland) [Mr Turbott below right], Dr and Mrs Carrick (2nd in command of CSIRO at Canberra), Dr Howard (worker on rodents and plants at California) and 3 marine DSIR zoologists from Wellington (also Peter Bull). Breakfast soon appeared, apricots and Weetabix, scrambled eggs on toast and unlimited marmalade and tea. 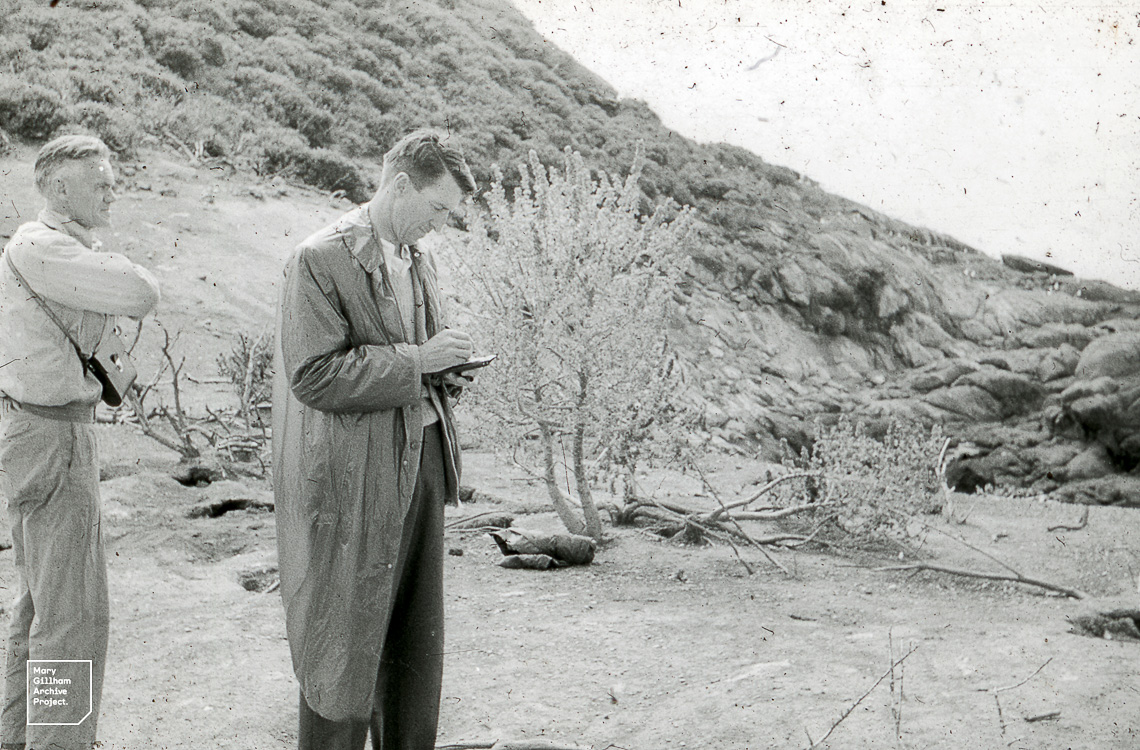 We were bound for Green Island only just off Dunedin but on the other side of the peninsula which we followed round taking 3½ hours in our 72ft boat and arriving in brilliant sun at 8.30am after a cold windy and very ‘swelly’ trip. (Both sittings for breakfast had to be finished by the time we emerged round the tip of the peninsula to avoid loss of crockery from the tables.) A few stayed in the boat dredging marine animals and fishing while the rest of us rowed ashore in the dinghy and joined the fur seals on the rocks (no beaches as such). Made a central dump in the muttonbird colony where every other step found one treading through the thin overly crust of soil into the burrows. (The egg that was so broken remained alive at least till 6pm cheeping loudly and waving its legs in the air altho’ so much yolk was still attached.)

Back about 1pm for ginger pop and sausage rolls at the dump hut and exhausted with scrambling up and down steep slopes where loose rock and soil kept giving way, hauling ourselves up steep slopes by the branches of the Hebe – Solanum scrub and forcing our way through dense low ‘bush’. But undoubtedly the most exciting, enjoyable and profitable day of the trip so far.

A rough getaway in the dingy, a hard pull to the waiting ‘Alert’ and we sped north to White Island (as Turbott remarked on the outward journey, there was no doubt some significance in the fact that the first island was white and the second green but we were all fighting fit on the way back.) Here two fur seals were perched surprisingly high up on the rocky pinnacle. We lay off and fished – my first real experience of handling a line, baiting the three hooks with bits of raw fish and trying to extricate the vicious hooks (the backwardly directed parts fully 1inch long) from the bony jaws of violently wriggling blue cod. Thrilling in that before we had let the weighted lines slide the 60ft down to the rocky bottom, we felt at least one tug, jerked the line sharply and felt a wriggling on the end. In fact, we couldn’t pull them in fast enough and it was not uncommon to get three in one haul.

The deck was littered with blue cod, one lemon sole and two barracudas, 3-4 ft long with vicious-looking teeth, in no time and for the whole of the rest of the voyage Captain Black was filleting them on a board lodged across a box so that he could flip the bits from the gill chamber straight overboard with the carving knife. A cut behind the gills, sliced down the backbone, the steak turned back while still connected to the tail by a 1” width of skin, then the skin sliced neatly off to release a fat steak and the other side treated likewise. The remains were handed to the zoologists who were extricating an interesting collection of sea shells ½ - 1½ inches in diameter from the entrails. The remains were then swung invitingly over the side for the benefit of the following horde of birds and then flung out, sinking just too deeply beneath the surface to be of any use to the gulls but being hauled up by the Buller’s mollymawks which sailed alongside the boat showing off their 7ft 6” wing span and bright orange bills (greyish in juveniles).

Blotched cape pigeons were among the followers and sat closer to the squabbling mollymawks than did the gulls but didn’t seem to get much. As we rounded the head a Royal albatross divided its attention between us and anther fishing boat harrying the mollymawks for their winnings. Soon after we got into the haven the bigger birds fell off, we saw no more giant petrels, and only the Southern black-backed gulls and red-billed gulls were left, these adeptly catching the smaller bits thrown them.

Back at the wharf about 6pm after thirteen grand hours and was ferried home in Captain Black’s car with an enormous parcel of blue cod fillets – the most highly prized fish hereabouts.