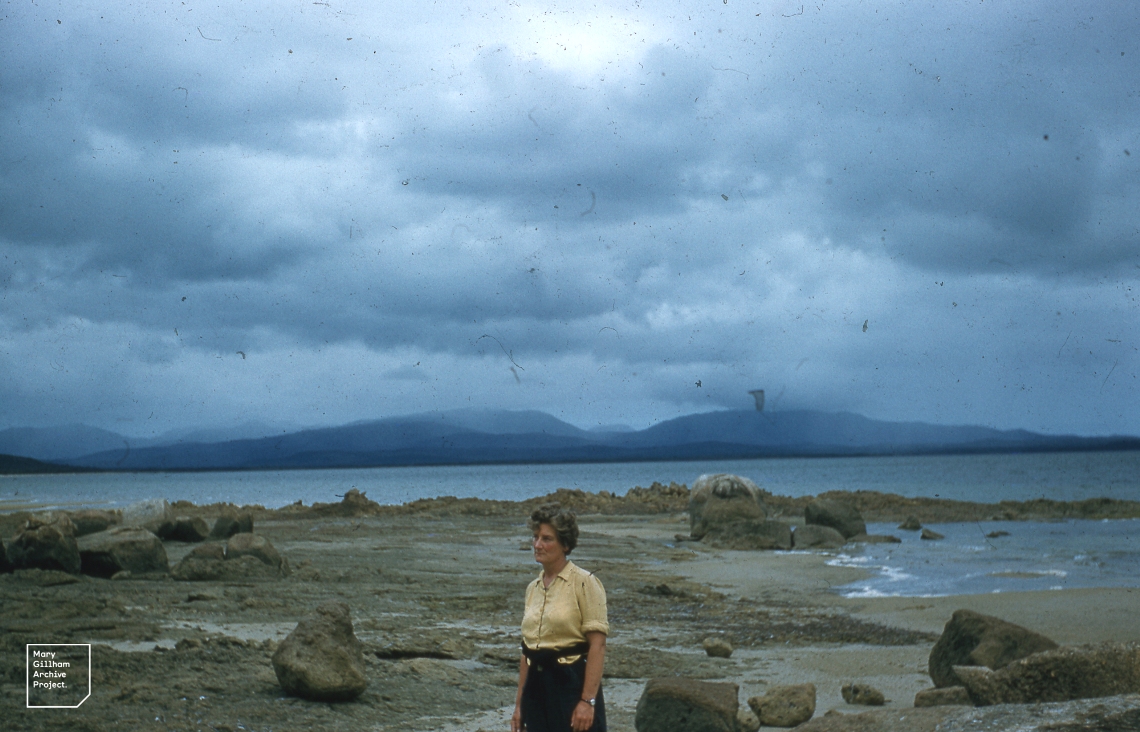 A day of heat, looking like rain at first but with sufficient breeze to prevent the other five getting to Granite Island.

The four female botanists had their biggest day, tramping approximately ten miles across to Three Mile Beach on the ocean side. John Thomson accompanied us on the first half-mile lap scrambling over the big boulders and low granite cliffs to the long beach. Remarkably varied granite with horizontal stratification, various inclusions and two beach cut platforms, very extensive at low tide level and apparently a most unusual type of granite coast weathering.

John inspected his small mammal traps along the tractor track and produced a young specimen of Rattus assimilis (a non-marsupial ‘native’ rat which had come to Australia with the Aboriginal people). Soft grey fur and bright eyes and destined, with two more of his kind, to return to Melbourne alive and be prepared for and sent to an American museum for which John collected.

Our next invertebrate interest (after the army crabs, crescent-shaped jelly masses of mollusc eggs and whelks, winkles, etc, of the rocks) was the remains of an ant fight. Thousands of big bull ants lay slaughtered in long winding columns where they had evidently had an encounter with the lively jack jumper ants of yellow jaws and painful bite. There were plenty of these hopping around full of life – one playfully biting John’s sandalled foot – but few corpses, so we presumed them to have been the victors.

Soon after leaving the zoologist we spotted two emus on the track ahead but didn’t see the one with the four chicks reported on Three Mile Beach. We watched them for a while crossing the low Melaleuca swamp into the burned area where the grass trees were flowering. It was in the Banksia forest at this point that we heard great grey kangaroos thumping on our return. 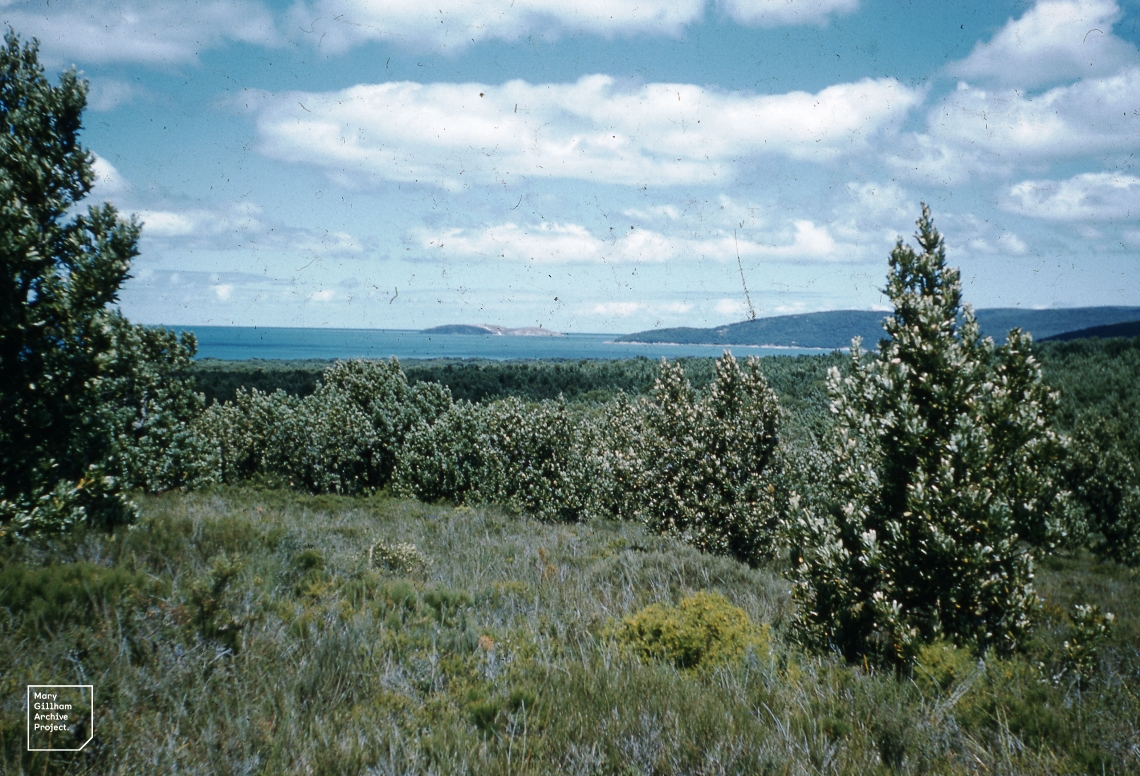 Just beyond here, about two miles from either coast, we were able to see both sides and we paused to admire both the view and the display of red-leaved Drosera (two species) and purple-flowered Utricularia (two species). A while after we passed the track to the first beacon, with its broken honeycomb and swarm of bees inside, and so regulated by light intensity that it had switched itself on during the afternoon thunderstorm of two days previously when the geologists had been in the vicinity to observe. Another mile or so brought us to the second light on a knoll at the north of Three Mile Beach and I climbed the ill-placed slats at the corner to prospect for any break in the scrub. A thin wavy line appeared a little thinner so we plunged into the 10-foot scrub and a short but energetic spell of scrub-bashing till we emerged on to something which must have been the old tractor track used when the lights were serviced from the ocean beach. Hat and fly net were ripped off early in the piece and our arms were not quite what they were when we emerged four hours in all after setting off. We were hot and dusty, and Beth and I cast modesty to the winds and plunged naked into the surf, plunging and splashing in the long white breakers as they curled in over the sands, but not attempting to swim (as it was a longshore current we drifted a way down the beach). 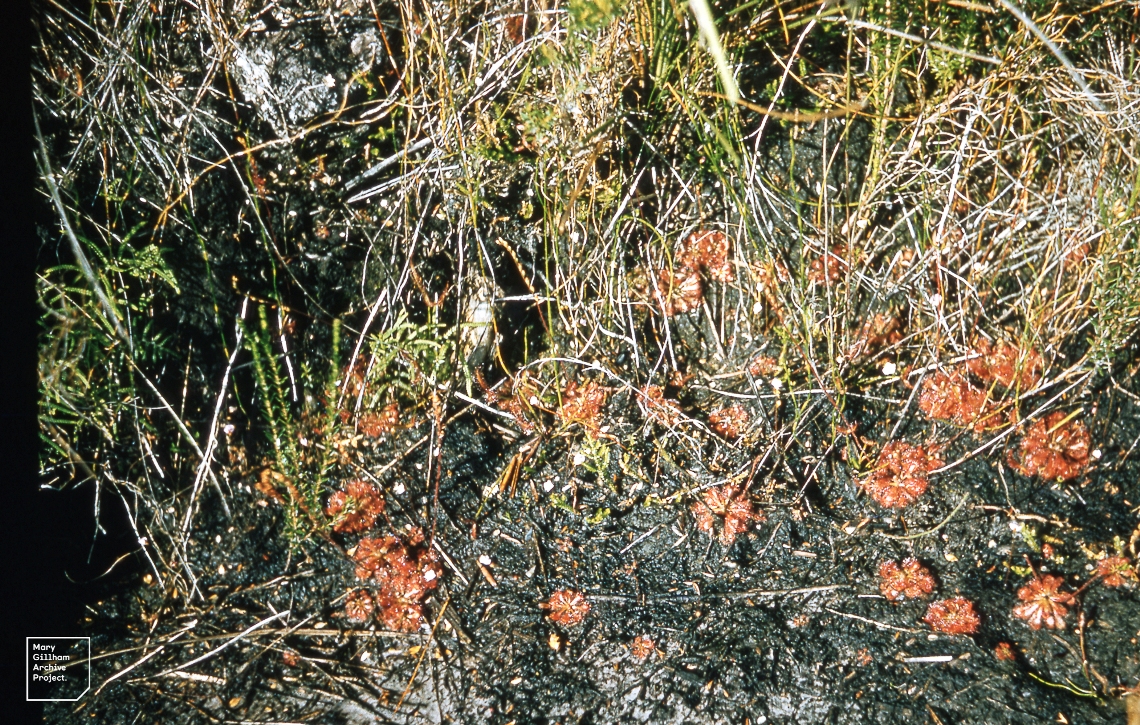 A cool breeze was blowing at our favoured picnic spot and we emerged feeling like new women. The two dusters, which I had popped in to tie round inside the neck of my Mac to keep the rain out when we set off under rain clouds, came in handy as bathing towels, the sou’wester as a sun hat for Beth, who had never dreamed such a thing would be needed!

We ate lunch from 2 – 2.30pm and then split forces, Stella and Linette listing the dune flora as far as the creek half mile down (and finding an enormous baler shell in the process), Beth and I doing the cliff and boulder vegetation.

We left the ocean at quarter to four, bashing our way up through the scrub to the track, and were back at the tractor shed two hours later, warm and slightly footsore but having swung now into a long and lasting stride. The half mile over the rocks was more wearing, though much more in my line than scrub-bashing, and while I waited at the homeward bend for the others, I bathed my weary feet in the ocean.

My turn on wood patrol so I dragged a couple of boughs along the beach behind me, and we rolled into a well-earned tea at 7pm. Down later to help pull the boat up out of reach of the tide, a little half-hearted identifying of specimens, and then to sleeping bag and half-length but comfortable ‘hiker’ lilo.