Another pleasant day of sun, cloud and breeze when we decided willy-nilly to go to Granite Island.

The dinghy only held five, and the party consisted of the zoologist and four botanists. I rowed for some time while the motor played up, and John had just got her going when Frank Roberts appeared round the north point, dropped his dinghy off and came to meet us. We didn’t really need his help, though he saved us a bit of fuel by giving us a tow over. He had his wife and children with him for a day’s fishing and didn’t want to linger till 4 or 5 o’clock when we planned to leave the island so said he would come and get us only if it looked like blowing up and incapacitating our small craft. 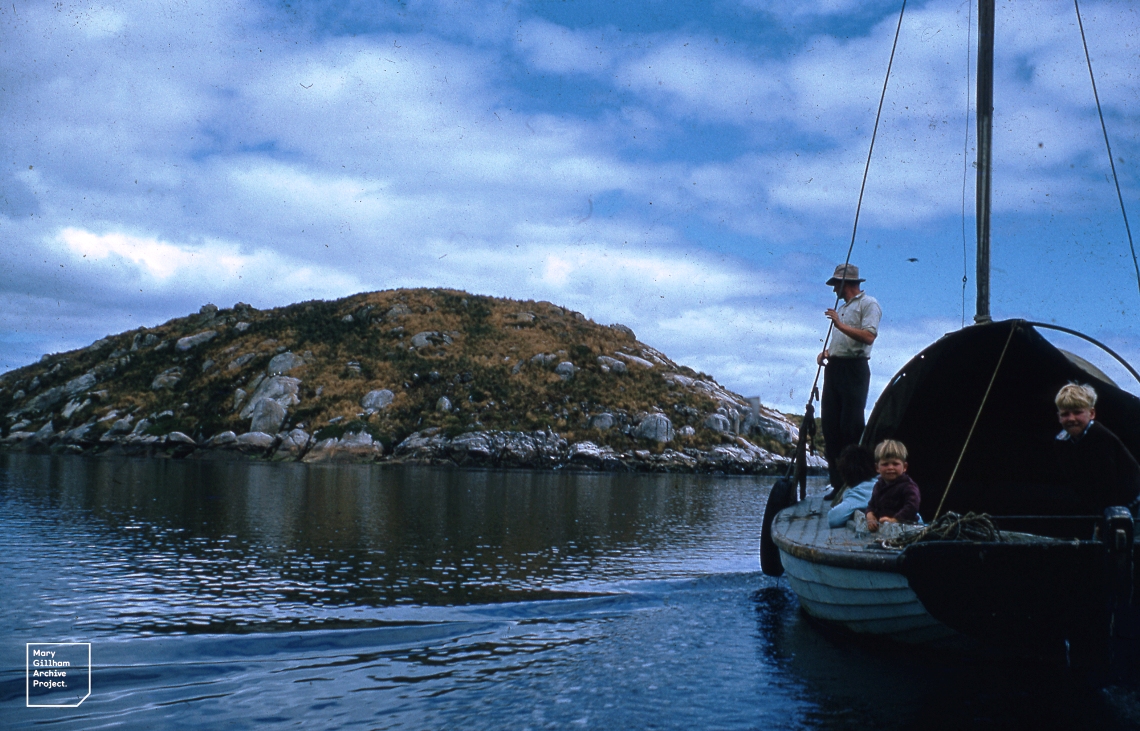 The island proved delightful, and even I, old hand as I was, was thrilled with the galaxy of silver gulls, black-faced shags, sooty oystercatchers and Pacific gulls on and over the rocks. John Thomson was especially entranced and knelt in the bow to row slowly twice round the island while I fired off photos for both of us. He stayed with me after we had landed the stuff and secured the dinghy, making copious notes like a good student, and there was much that he could tell me about the hoots of little brown wogs that were undoubtedly associated with the birds, and the harlequin bugs (juveniles like scarlet and black ladybirds, adults half an inch long and splendid in black and yellow diamonds). These were plant feeders and were found in the Australian hollyhock but could be attracted by dead meat and were thought to be so abundant here because of the dead shearwaters. Signs of death by heat but plenty of muttonbird carcases scavenged over by the more than unusually numerous ravens. 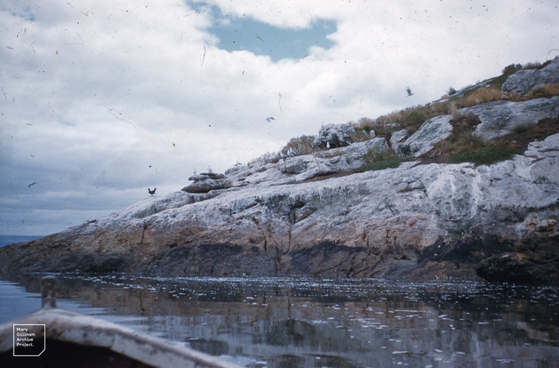 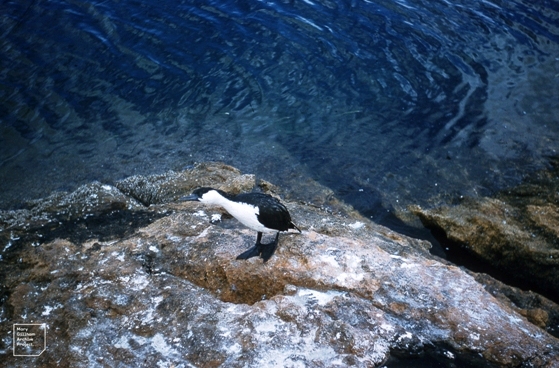 The gull colony of several hundred birds had eggs and young chicks present, a few of the latter being frightened out to sea. They were mobbed violently by the adults as they paddled out, their involuntary ducking as each bird swooped looking for all the world like a nod of recognition or greeting. As they paddled buoyantly back in, not at all waterlogged, the adults seemed to leave them alone but swooped again if they turned out to sea, as though driving the errant youngsters back to the safety of home.

Of the several hundred black-faced shags most returned to their roosts on the west and northeast soon after being disturbed and came and went at intervals all day. They were still present when we left at evening, although many hundreds of shags from elsewhere were dotted thickly on the mudbanks to the north and northwest like the black spars of old wrecks protruding from the mud. We saw no nests and I wondered, as often before, where all the shags I see roosting on both sides of the Bass Strait do their breeding. Some were quite tame, and both the other three, who functioned independently, and we two managed to get to within six feet of a few individuals for purposes of photography. The oystercatchers (one pair) and Pacific gulls (two pairs) were not so accommodating.

On landing, I hauled a half-grown chick out of a burrow to be admired by all and sundry, and John followed suit, on and off throughout the day, although he admitted later that he was terrified at first of the possibility of there being snakes down the burrows. This was the island which Mr Brazenor of the National Museum wanted to make into a sanctuary for black tiger snakes, but I had not heard that there were any there now. The brown tiger that had come ashore a day or two earlier from that direction might have been evacuating the island prior to our invasion but was more likely to have looped round from elsewhere on the mainland.

Most of the chicks were of much more even ages than on Rabbit Island, where they ranged from unhatched to almost fully grown. The half-grown ones were usually unaccompanied, the parents present being usually with slightly smaller chicks. Most of the eggs seen were addled and many of these were laid beneath tussocks or in quite inadequate burrows that were as deep as the soil allowed.

The vegetation impressed the botanists as being completely different from the mainland vegetation and undoubtedly conditioned principally by the effect of the birds. 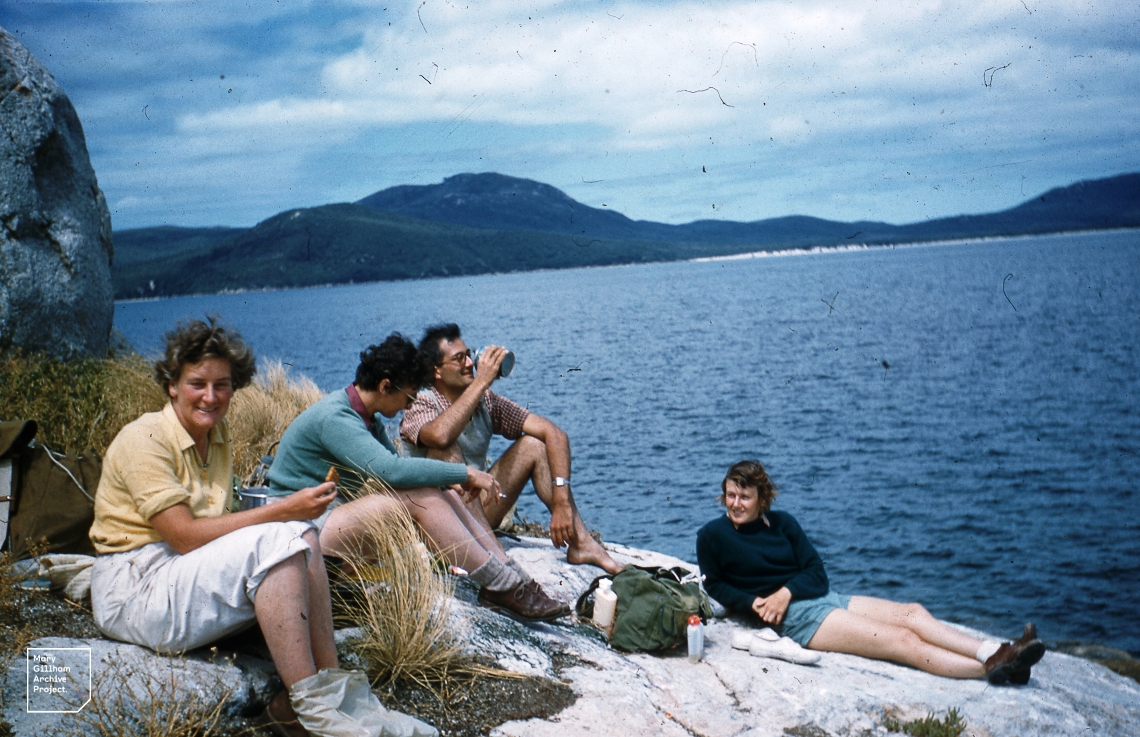 John [pictured below, holding a shearwater] and I staggered back through the summit rookery for a late lunch and left the other three to browse and sunbathe on the rocks while we did a mighty and very profitable transect six yards wide up through the shag roost (Lepidium – very rare on the mainland) and a transition zone of Bromus diandrus to the muttonbird rookery where burrows averaged 2½ - 3 per square yard. It was uncomfortably hot at the beginning, uncomfortably cold at the end, which was after 5 o’clock on the breezy summit. Muttonbirds crowed and scuffled underground, and a few came out on to the surface and suffered being photographed. 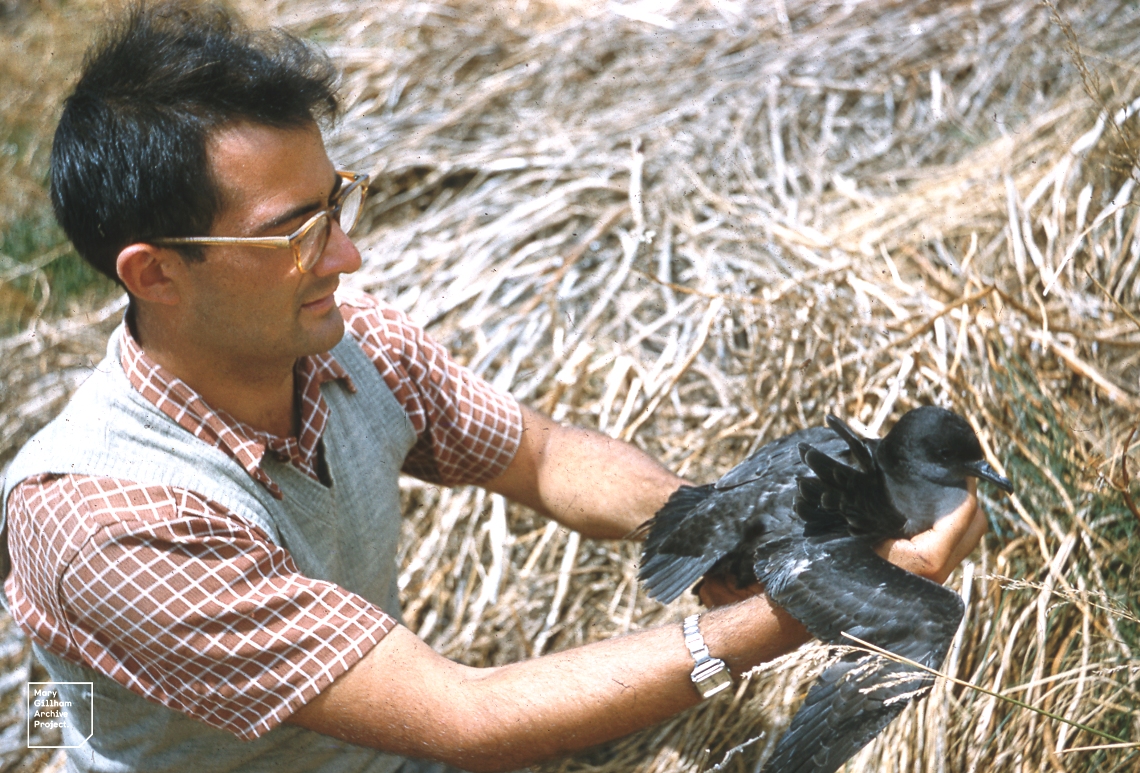 We returned to the loafers with guilty consciences for being so long but fully satisfied with the day’s work and thrilled by the day’s spectacles. We were only sorry we couldn’t stay beyond 5.30pm to see the possibly greater spectacle of the muttonbirds flocking in over moonlit shags and gulls roosting on the rocks.

The other five members of the party had intended to come over in the evening to see this but the geologists got held up and had still not returned to camp by 7.30, when it was much too late to get to the island in time for landfall. Instead the dinghy went down to Long Beach and picked them up, footsore and hungry on their long way back from Mt Hunter and the ocean beach. Certainly the geologists expended more energy than most this trip.

The other five, urged on by birdwatcher Dave, tried to get to Granite Island several times during the rest of our stay but were thwarted every time by weather. They were thrilled by John’s account of the place, and Dave decided it was the nearest ‘real’ bird island to Melbourne, very accessible in contrast to more oceanic islands, and should be seriously considered as a spot for doing serious seabird work. Let’s hope he gets his bird observers in before Brazenor gets in with the tiger snakes!

Strange that I, a mere English[wo]man, should be the means of introducing the local field scientists to some of their own local natural history of which they had neither known nor known how to get to.