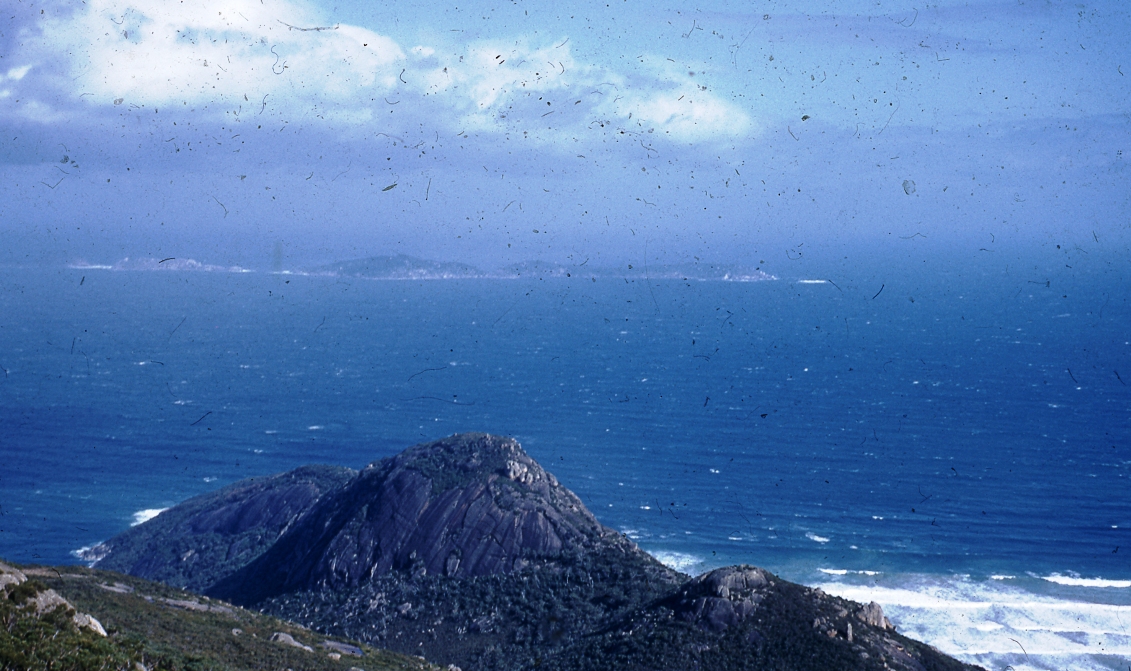 A humid hot cloudy day with some sun in the morning.

A suitable day for Granite Island but again Frank Roberts didn’t turn up to take us. In the morning we identified plants and went swimming, then strolled along the beach collecting plants. Only five present to lunch, during and after which it rained with some force.

John Thomson had promised to collect the two geologists from Long Beach with the dinghy at 5pm, and Stella, Beth and I decided to spend the afternoon there botanising, rain or no rain. We set off in Macs, Beth and I taking an oar each till the motor could be persuaded to start. We arrived somewhat damp, hitched our Mac tails up as we waded ashore and paddled up through the hosts of small long-legged purplish-red soldier crabs that burrowed energetically and disappeared into the sand as we approached. John stayed to make the boat fast and, when I turned at the top of the beach after the others had disappeared into the scrub, I saw that he was having trouble with her. 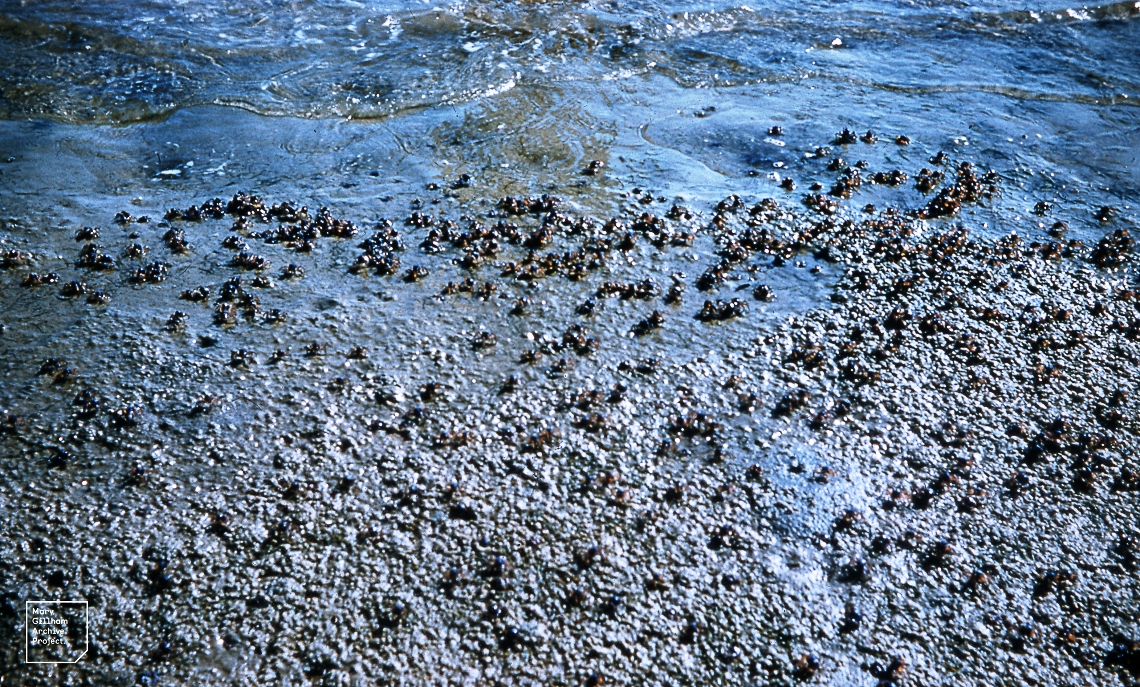 The wind had whipped up suddenly from the west and was whistling vociferously among the dune shrubs at the end of the tractor track and swinging the heavy dinghy round so that he was unable to hold her, half blinded by rain and spray. He raced up the beach to say we must return at once before it got too bad to go and we hastened up the track to get the others. We found them at the tractor shed (the tractor was used to take the gas cylinders across to the two automatic lights on the ocean side at the north of Three Mile Beach).

We left a note for the geologists on the tractor under Cecilie’s zipped water bucket and made for the boat, leaving behind the small mammal traps that John had intended setting during the afternoon.

Beth and I kept her head on the choppy little waves while the outboard jibbed repeatedly as outboards do in emergencies but, eventually, we were under way, our pilot having discarded his leather coat in the heat of the morning and getting more soaked in his shirtsleeves that we were. I rescued his watch, and we splashed our way round to the home bay and anchored well out, wading in and repairing to our leaky tent to get dry.

It rained steadily for the rest of the afternoon but the wind dropped as suddenly as it had arisen and John went back on his own to pick up the geologists, who had been more than a little puzzled by the note about rough seas when they emerged from bush to find the inlet like a millpond.

We went boating again in the calm of the evening, John rowing out towards Granite Island at sunset in the hope of seeing some of the shearwater rafts working for land. (John McA had seen some at 11am one morning flying south towards Rabbit Island from the inlet, and Arnie Smith, boatman, said that they often fed close inshore during the day in rough weather.) There was a big tidal drift running in the Bennison Channel, sweeping us in towards the head of the inlet, and the Posidomia on the shallow sandbank well out to sea was clearly visible 2-3 feet beneath us in the dusk.

Others of the party were busy on the shore by the northern rocks with torches catching toadies as we rowed silently back through the darkness, and John later cut these open (the toadies) and found the stomachs full of fragments of small crabs. These fish are poisonous and have no predators.

Max had been using a plankton net and his interesting collection of small squids, crustaceans and other microfauna was emptied on to an enamel plate and regarded with interest by those trying to devote attention to plant and rock specimens.

Beth and I slept in the marquee again tonight in case it should rain again and rain it did – and blow. She woke me at 1am when the marquee was almost taking off over our heads and we lowered the centre pole by taking the two blocks of wood out. This meant that there wasn’t a clear foot beneath the brailing for the wind to billow in. We tied flapping corners and retired again but Beth got dripped on now that puddles could form again in the roof and had to move from her perch on the table and settle on the floor beside me. Much equipment was moved in the process but I slept through it all. 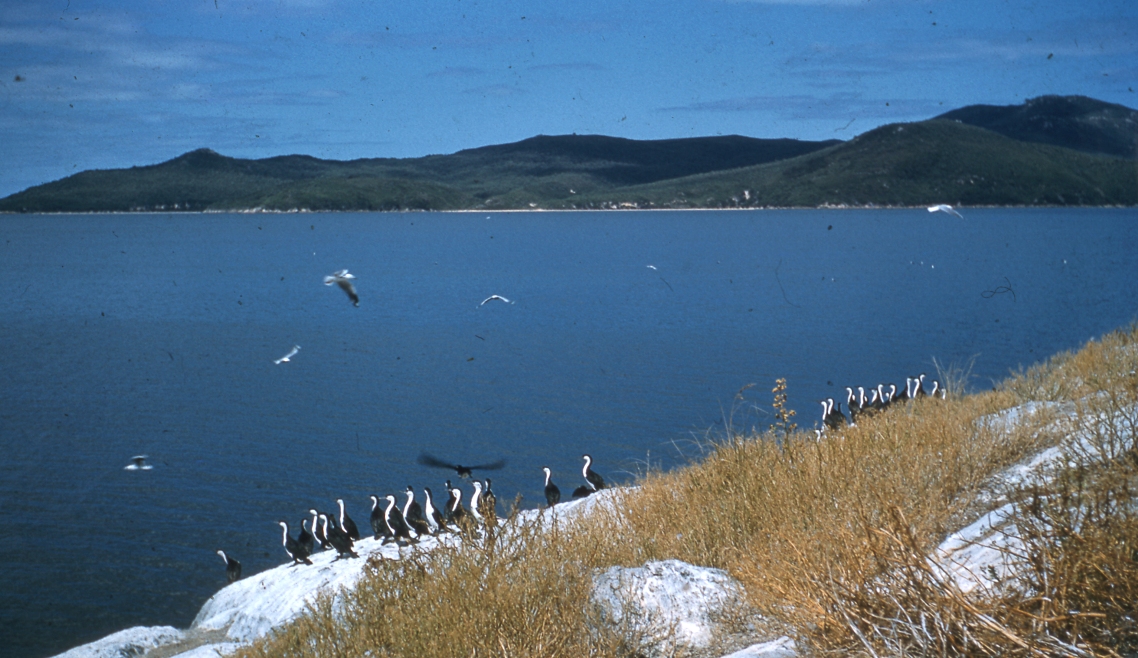