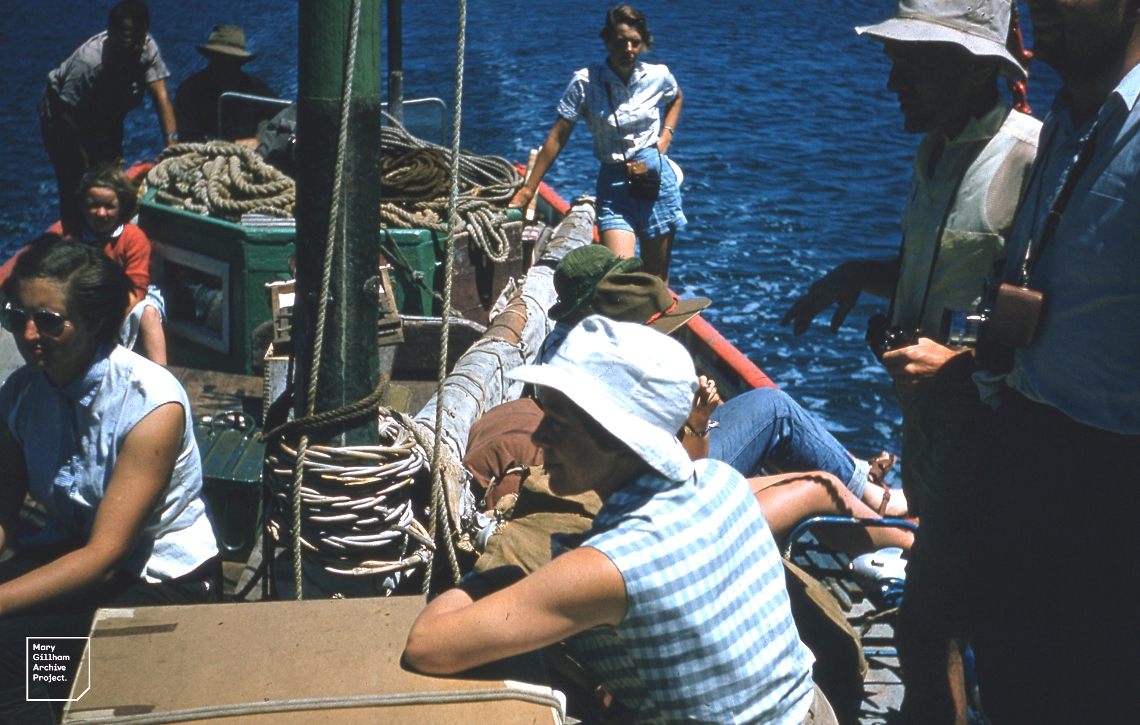 The day started early with great grey kangaroos making great thumps in the near vicinity of the tents. It continued with an ear-shattering explosion as the senior geologist and some male playmates let off one third of the ICI gelignite, which they had brought but not used. This was placed on top of a boulder on the beach and threw a mushroom of granite fragments far across the beach and out to sea, the culprits capering back delightedly to view the havoc like a gang of excited schoolboys. The second two thirds, placed beneath a boulder about half an hour later, was supposed to be even more shattering, and most of the populace appeared on ‘aerial hill’ to observe but it was a little disappointing from the spectacular point of view, though had the virtue of getting even Stella out of bed. Port Welshpool must have wondered what was going on, as also must the RAAF as a jet plane loomed low overhead soon after, looking for trouble perhaps, but finding none. As Arnie, who fetched us out later in the day, was very deaf, he asked nothing of the explosions, so Port Welshpool is probably still wondering what rocked it on that quiet summer morn. 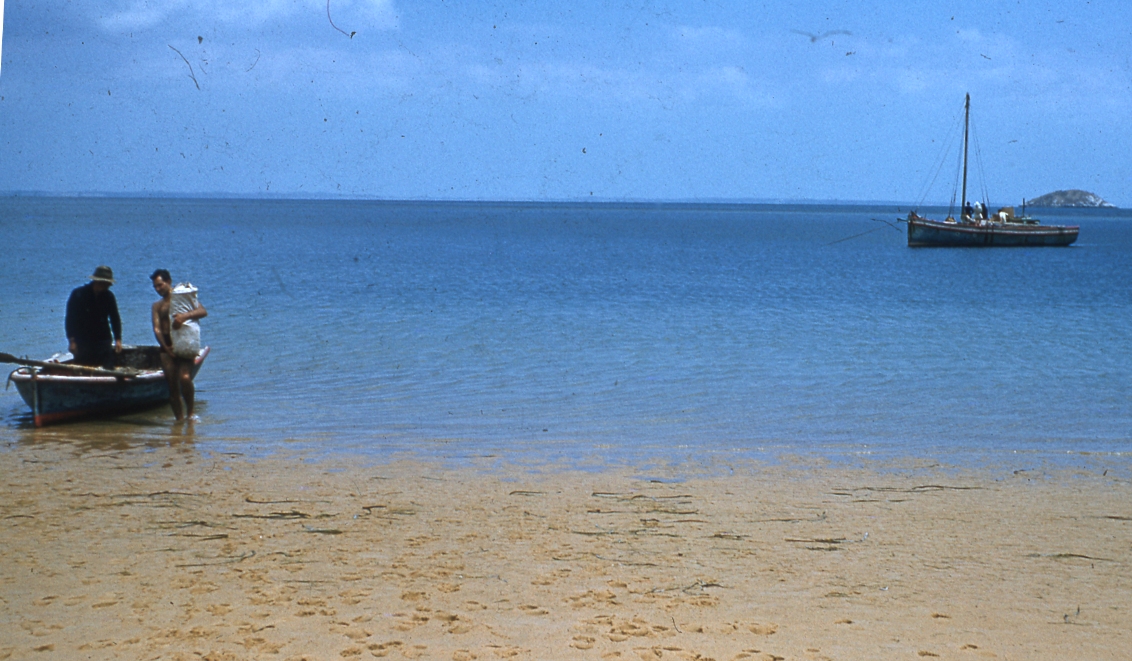 Arnie, on whose time of arrival we had almost held a sweepstake, arrived to take us off at 9.30am, when we were, of course, not nearly ready. It was 11.30am before everything was finally struck, burned, filled in or packed up, carried down to the beach, and ferried out to the ‘Nora Iles’. We paddled along the beach to the north to view the scene of the explosions, and gathered a dead porcupine fish and some starfish on the way back.

Our first stop along the coast was to pick up some lobster pots which Arnie found unprofitable as other members of his trade lifted them and took the contents at intervals (as viewed through field glasses). There was no crayfish in any, other than the shells of ones which had died and been utilised as bait to catch their fellows. Most profitable contents were a large blue and orange ‘leather jacket’ [pictured below], the ‘fisherman’s’ fish, so tasty that it seldom got past the fishermen to the public market, and a handsome hermit crab. The two Johns got the lobster pots up in the dinghy and rowed them ashore and hid them high among the huge boulders on the point according to Arnie’s instructions. Rather none should have their contents than another! 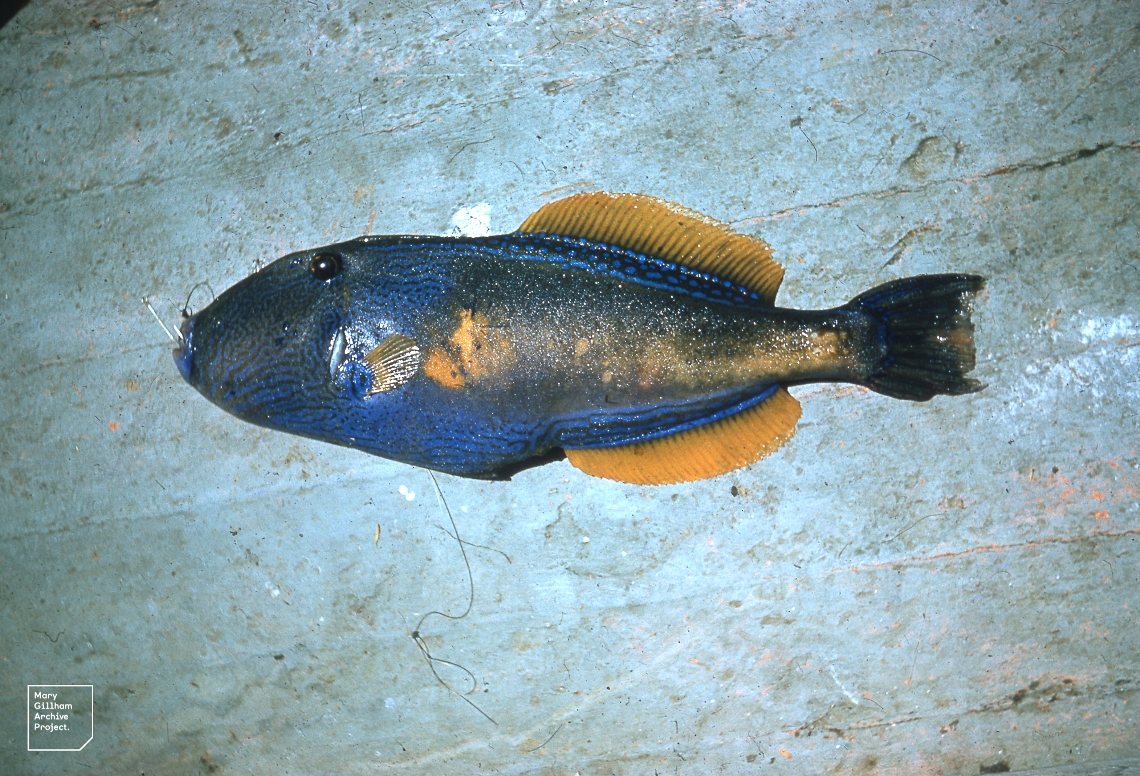 The next detour was a little way down the ocean side of the prom to view the very fine example of erosion that was occurring on the northeast point. Here the sand had cut well back and the beach below low water mark was strewn with the remnants of large Banksia trees from the drowned land.

After that a steady chug home, during the first part of which I went to sleep on a pile of ropes on the cabin roof in the sun. We got in at 2.30pm and unloaded the gear on to the jetty while the three drivers went to get their vehicles. I left them to load up and walked along to the garage to settle up with Frank Roberts for the boat trip (halting his car on my return).

Two cars went off independently – Stella, Beth and I with the botany truck lingered to buy drinks and stores in the little shop and went along to the camp site at the other end of the front (where we could get water) for a belated lunch.

It was 4pm by the time we were away from Port Welshpool ... Home [to Melbourne] about 9.30pm after a most successful and pleasant trip.