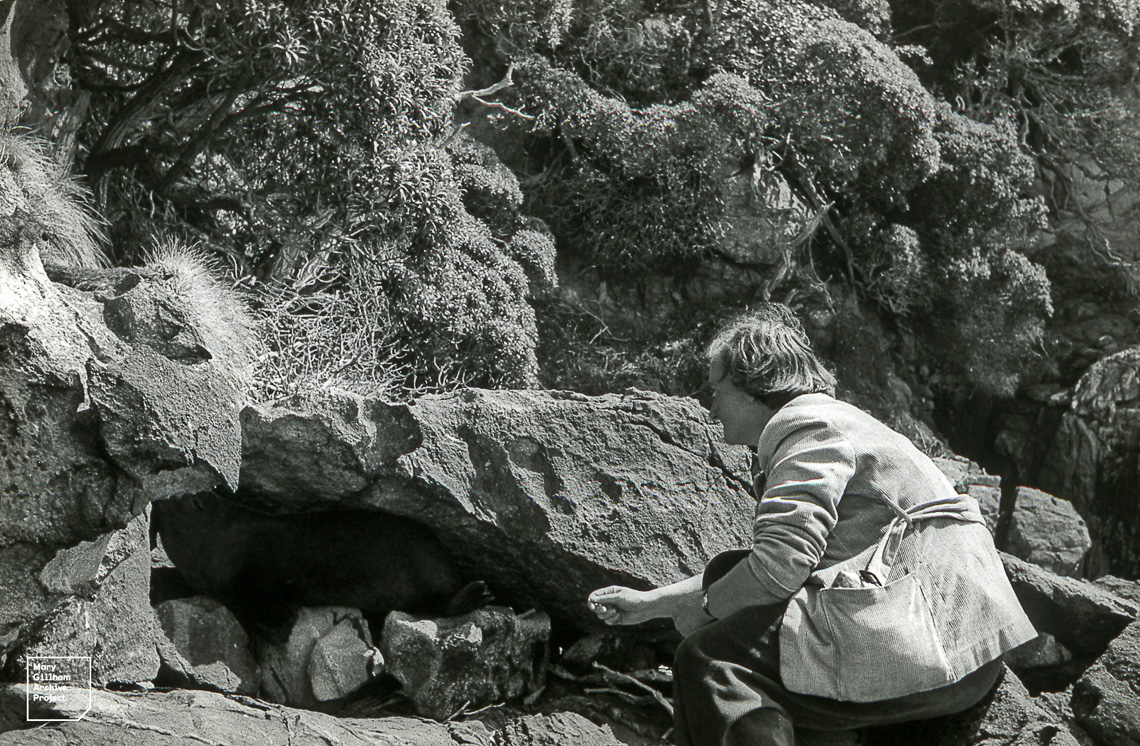 At the conclusion of the more formal aspects of the ANZAAS conference in Dunedin, Mary joined other attendees in a 7-day organised trip to various locations in Otago and Southland. She then made a private 10-day visit to the southernmost of New Zealand’s main islands, Stewart Island.

Tuesday 5 February 1957
After a tiring morning [exploring Ulva Island] we reached the rest of the party who had landed on a sandy beach, built a fire, strung three sooty kettles over it on a rod between a rock crevice and a branch tripod and were preparing lunch, the wekas already wandering about over the jackets thrown down on the ground and peering into bags to see what was worth eating ...

Immediately after lunch we four hopped in the dinghy while the rest set off for Boulder Beach on foot. Traill rowed us out to Goat Island in Sydney Bay where we took close up photos of blue and large pied shags and white-fronted terns on the low rocks.

Wednesday 6 February 1957
Walked to Capt Turner’s house and set off after a short visit with Mrs Turner and Roy Traill to visit the student house, ‘Moturau Moana’ presented to the Government by Mrs Baker. A lovely walk (the weather fine now) past salt marsh (The Old Mill Creek where some of the now discontinued timber milling had been based at the outlet of a small river), bush-covered cliff, the hermit’s cave (where an old man had lived till recently), sandy beaches and rocky headlands.

Moturau Moana, of which Roy held the keys, was a lovely big black and white timbered house set in beautifully kept gardens and bush and commanding a grand view. Unused at present due to staffing difficulties but a students’ paradise and much too good for a field centre with polished wood floors and valuable antique chests and furniture. Empty for months, tho’ in no way decrepit, and a ‘palace’ which many a family would have fought over to acquire.

Thursday 7 February 1957
Roy Traill laid on a private launch trip to bird islands for me today and our companions were Isabel Baker, Miss Baker’s young cousin, and 85-year-old George Moffat. We set off in the ‘Polar Star’, 24ft launch, at ten from Golden Bay and made Tamihau Island our first stop. Here Isabel and I leapt ashore from the dinghy and scrambled up the rocks for thirty packed minutes …

Back along rocks to dinghy and launch and next stop on Tommy Island to look at penguins. … We three [Isabel, Traill and Mary] followed the tracks of yellow-eyed penguins into the bush, stalked the ½ fledged youngsters along the ‘sheath knife trail’ which Traill blazed for us thro’ the ferns and under and over the prostrate tree trunks … 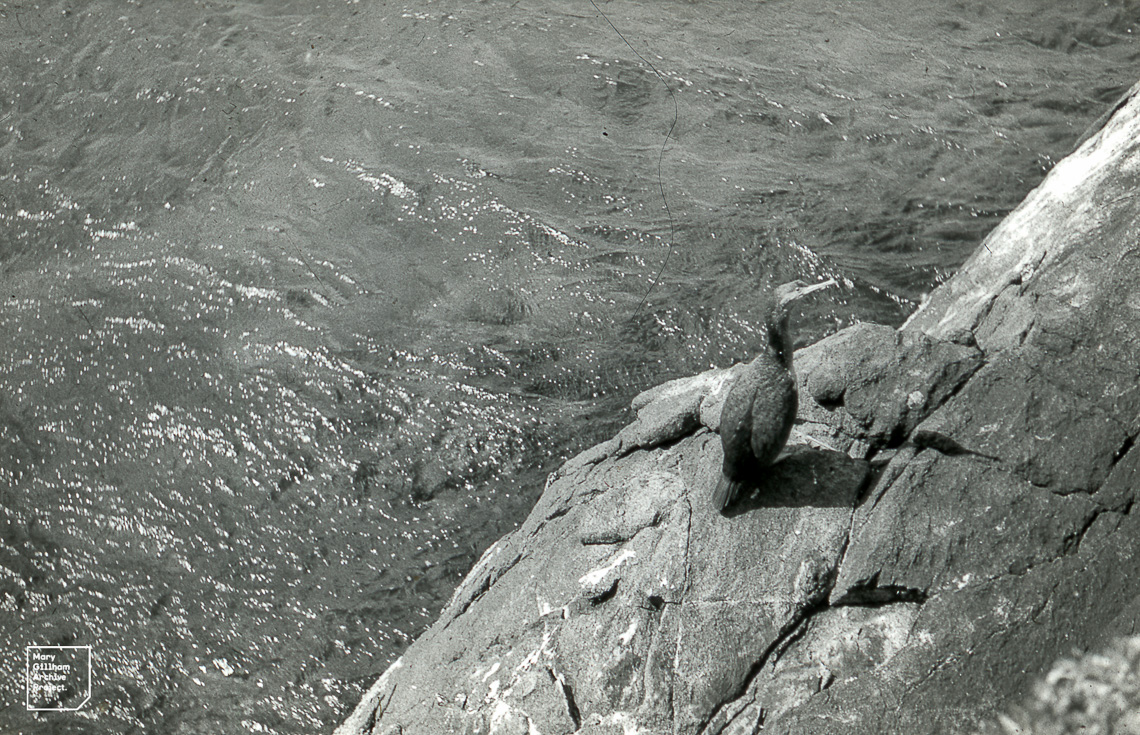 Friday 8 February 1957
Another lovely day. Met Capt and Mrs Turner at 1.30 and was whisked off to Thule in their land rover and helped to get the dinghy out of the boatshed and row out to the 28ft launch ‘Pearl’. We chugged across Paterson Inlet in the boat, beautiful ship-shape and neat after the tumble of old clothes and ‘useful articles’ in Capt Traill’s launch, and landed on a little beach on the further shore (Glory Cove).

... followed a bush track through to Ocean Beach ... Then along the lovely, wave-pounded sands to a rocky headland where we gathered seaweed and paua shells to our heart’s content and were entertained by a yellow-crested penguin who had come inshore to moult and wasn’t going back to sea for any humans.

Saturday 9 February 1957
Warm calm and sunny today and a grand and major expedition aboard ‘Pearl’ to one of the southern muttonbird islands of which I had dreamed a world away. I had been warned they were very difficult of access, partly because of rough seas, partly because the Maori muttonbirders had rights there and whites just did not land. We were bound for Tia, or Entrance Island, off Port Adventure and took the Maori owner, 76-year-old Nai Bragg with us, my good friends having pulled the necessary strings. Nai was a delightful old soul, descendant of one of the first Americans who had jumped ship and married a full-blooded Maori, living at Bragg’s Bay and no longer able to sail his own boat so grateful for the trip down. Our sixth member [Roy Traill was also with the group] was Ray Swanney (?), local schoolmaster, Captain and Mrs Turner, and muttonbirder Bragg ...

Out of Paterson Inlet and down the coast round East Cape, we reached Tia 2¾ hours out (7-8 knots and c.17 miles down the coast, once out of the maze of inlets). The water black en route with an unbelievable number of muttonbirds, thousands upon thousands, acres and acres of them, and yet ¼ million are taken here each year, 12,000 on Tia alone and “this was only a small part of them” according to old Nai. Past shag rocks and swimming penguins till we got outside and terns gave way to gulls, Buller’s mollymawks, black-browed albatrosses (or shy mollymawks, which are not shy and are much bigger than Buller’s with a grey not orange bill) and an odd Royal albatross and cape pigeon.

We rowed ashore between rocky stacks to a lovely sandy beach where driftwood was gathered for the ‘thermette’ while Ray and I went off photographing fur seals and an odd hair seal, sea bear or sea lion, lighter coloured and less furry, much rarer and fiercer than the fur seal. Unused to human disturbance, the fur seals had to be wakened up forcibly to have their pictures taken in some cases.

Back for lunch among the pink and blue paua shells, then up the track to the muttonbirders’ huts, now very cobwebby and overgrown, and off along the tracks among the hundreds of muttonbird burrows ...

Emerging on the further side we sat on the cliff top watching the antics of about ten fur seals and the odd hair seal below. Cows and pups gambolled in the “children’s bathing pools” among the upper rocks, “old men” lay on their backs in shallow water waving their flippers in the air, they rolled, scratched, “sang”, snorted, lolloped and lazed and a couple of bulls got involved in a fight. Fantastic rock formations, blue-green sea, white breakers and a never-to-be-forgotten sight. We followed the cliff top and scrambled down through thick almost vertical bush, dislodging a few dead tree trunks en route, and gained the sealer, where we fired off photo after photo at close quarters.