Botanising with the McCoy Society 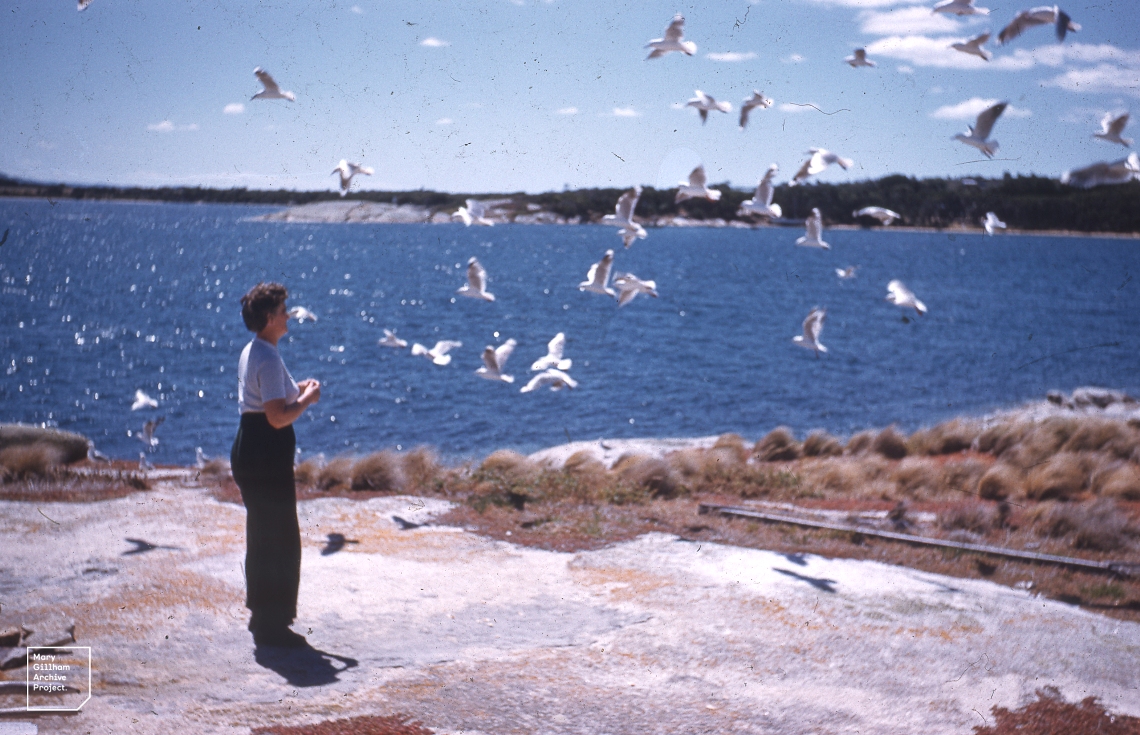 This was Mary’s first outing with Melbourne University's McCoy Society (read more about the Society here). Mary travelled with her friend and work colleague Prue Dempster, to meet up with other botanists and zoologists for a day of squelching about in mud and mangroves on Wilsons Promontory, an area on the southern coast of the Australian state of Victoria that has since been designated a national park. This is Mary’s diary entry for that day:

Pru Dempster and I today joined a McCoy Society trip to Chinaman Island in the northwest corner of Western Port Bay. We left college at 8am by train, took a 25-minute train ride from Flinders Street Station through pleasant and unpleasant suburbs to East Malvern and were picked up there by Dr Tom Neales (of Oxford and Wye) in his ‘utility’ which he had bought free of purchase tax in GB and imported into Australia duty free, when he came 18 months ago, i.e. had paid £450 instead of £900.

We followed our route of a fortnight before with John McNally, Arthur McComb’s ‘bomb’ ancient vintage Armstrong Sideley at first before and later behind. In reaching the mangrove inlet at Warneet we found we had overshot our turning by a couple of miles so returned and bumped over several miles of sandy ruts to the appointed meeting place at Cannon’s Creek jetty.

A long wooden jetty, flay shaped, projected from the sandy shore and harboured a large collection of dinghies, mostly belonging to the launches that lay at their anchorage round about. We chatted among the tea tree and eucalypts of the shoreline as the party assembled, a carload of zoologists, including Dr Drummond, second in command and Mr Johnson (?) of my previous acquaintance; a bird watcher schoolteacher with Arthur McComb in the ‘bomb; another teacher-cum-second-year botany students who had completed his zoology; and Bruce Muir, beginner at the herbarium, part-time geology student and the ‘runner down’ of my Bass Strait specimens (though he was terrifyingly clueless in the field, not even recognising genera such as Zostera and Salicornia). Late arrivals, for whom the boat had to return, were Garth Everson and Lynette Osborn of the botany department in Garth’s open truck.

Meanwhile Johnson, apparent party leader, had managed to borrow a dinghy and, with Tom’s assistance, had eased her from her moorings and under a tangle of ropes slung between booms in the intricacies of the jetty head. Half of us trooped down the steps and got aboard, the others boarded a small motor boat and offered to give us a tow but, by the time they were away, we were three-quarters of the way there, so paddled on under our own steam, weaving our way through the muddy shallows.

I was quite happy about running aground, being very experienced in having to get out and push in the Bass Strait, but I was informed that that was not in the realms of possibility here. He who stepped out to push would probably find himself waist deep in mud. Obviously the thing to do was not to run aground though, as the lookout in the bows, I found it a matter of difficulty seeing where the bottom was through the soup-like suspension of mud ...

We crossed the end of the creek separating Chinaman Island from the mainland and landed at the end of a boulder bank below the mangroves, i.e. just off the end of it, so as not to scrape the dinghy bottom ... We picked our way gingerly as we left the safety of the rocks and squelched round the lower margins of the mangroves with their wary pale orange (?) flower clusters. Little of interest to the botanists occurred among the forest of aerial roots beneath, not even any of the apricot-like fruits I had seen in the Bay of Islands in December, but the zoologists were enchanted and spent most of their visit mud-wallowing with a sieve and a shovel ... 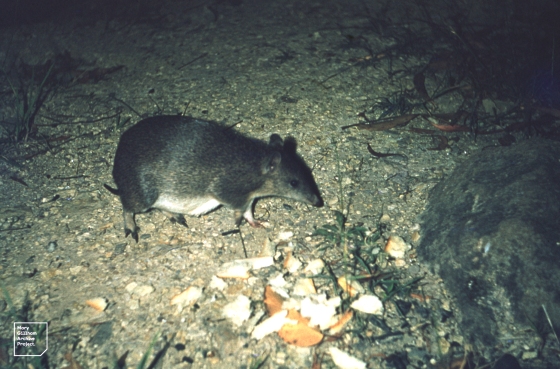 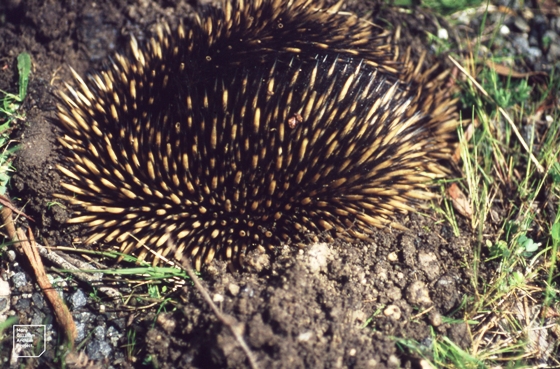 I left the gurglings and squelchings of the zoologists to seaward and explored the salt marsh at a more suitable level, working mainly along the herbaceous samphire zone between the shrubby samphire and the pig face. My major contribution to the McCoy Society activities was to list the grazed and ungrazed plants, and there were more of the former than the latter and plenty of animals to graze them. The dung pellets of rabbits and wombats were extremely numerous along the shoreline and there was a great collection of footprints belonging to the black-tailed wallaby (standing about 3-foot high and almost the size of the Bennett’s), the bandicoot [above left], echidna [above right] and koala [below] (big lumbering tracks the latter, and rather surprising that these notoriously lethargic eucalypt dwellers should venture as far as the sandy beach on their night forays). They naturally spent most of their time among the Manna gums where 48 had been introduced from holding areas awhile before. Nobody seemed to know how the colony had fared, only 2 of the 48 having been seen on the society’s last visit and none on this. 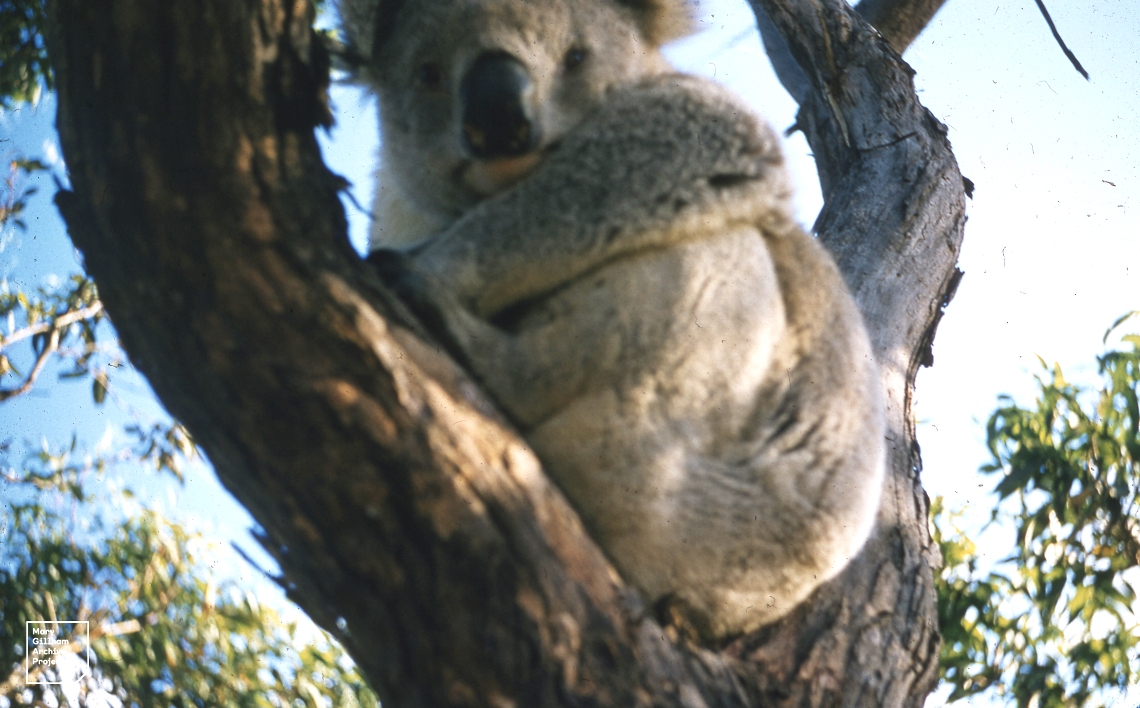 When I worked back through the marginal tea tree scrub to the Manna gum and sedge patches of the interior I spotted several ring-tailed possums’ nests. Others, who shook the trees whereupon these were built, were rewarded with the emergence of possums ...

The bush was full of the piping call of birds, mostly honeyeaters of which there were four species present. One, with a raucous screech like a cock pheasant, was the red-wattled honeyeater; the others were the white-eared, white-naped and brown-headed honeyeaters, more audible than visible, though one caught an occasional flash of a yellow breast. Blue wrens were present and I spotted the tail end of one flame robin. The bush floor was of dark sand and riddled with ant burrows, with scattered patches of rabbit and other burrows. The ants were the enormous bull, bulldog or bullhead ants, with fearsome jaws and shining red abdomen – one inch or more of bad-tempered ferocity, and the jumper ants, yellowish and black, smaller but with a more ferocious bite. These progressed in an erratic series of runs and hops, and indulged in a fury of activity when the nests were stirred up. Fortunately the gumboots that served as a protection against mud served also as a protection against ants.

We only had the dinghy for the morning so at about 1 o’clock we reassembled on the shore and some of us took off in the dinghy while others elected to ‘walk’, if their progress through the ooze could be graced with such a term. I was the only gumbooted member in the dinghy so had the job of pushing off and pulling up on the landward side of the creek where we thought we might get out and walk so that the dinghy could go back and ferry the others across the creek.

I stepped gingerly over the bows onto the Zostera, leaning heavily on the boat as I let myself down into the mud but, so far so good, I hauled the boat after me to the knoll of rocks which provided a safe haven at the creek mouth but, at that point, there were yells from upstream from a gang of men trying to get their launch unstuck where she was wedged across the creek and firmly embedded in ooze. “For God’s sake don’t get out there, you’ll go in up to your waists in mud.” We thought we could have got inland along the drained margin of the creek to the higher ground beyond and thought they probably envisaged up trying to get straight across the flat to the jetty but decided not to fly in the face of local advice. I had, perforce, to vacate my firm foundation upon a rock and take to the ooze again. By the time I had got the dinghy clear I was beginning to wish I hadn’t come, and my final entry into the boat was far from elegant.

We left the others to find their own way up the creek-side and across at a higher point and threaded our way through the sand shoals, dead low tide now and the channels at their narrowest. We unloaded at the jetty and, after spending an unconscionably long time trying to thread out way through the ropes and booms to the original mooring, were haled from the shore and told to make her fast at the steps.

We collected our lunch from the cars and spread ourselves at the top of the sandy beach to eat, a mob of silver gulls descending to join us before the paper bags were opened – obviously experienced gulls, and they didn’t do so badly out of it ...