From Town Bred, Country Nurtured:
On 29th March 1942 I packed my bags at Tanners Farm and moved north-westwards along the Thames Valley to Warren Farm, run by Mr E.B. Savoury at Streatley-on-Thomas. I was still in Berkshire, but in an entirely different style of country, well back from the river on the Berkshire Downs. The land was rolling and spacious, with wide skies and scudding clouds.

In her later years, Mary went through her diaries for these years and summarised her war-time land girl experiences. These are extracts from that later summary (we do not have the original diaries for this period).

I seem to have stepped from the frying pan to the fire in expressing a desire for a taste of field work rather than yard work, to fit with my new agricultural correspondence course. This was not field work as I knew it but savoured of a labour-intensive version of the factory farming that was to come. I was squatting at ground level throughout on the open downs with nothing to block the wind. My most plutocratic farm and my most menial job! – but fortunately not all the time.

I lasted only 7 weeks at Warren Farm, enough to get the feel of the place and an experience I would not have been without. It was not all dock-digging on my own, as expressed so feelingly in the poem [see below] … Others, even the boss, joined me at first, for shorter periods. Those long hours breasting the gale on the Berkshire Downs are the only memories of that period that have stayed with me – not even the names of my fellow workers or where I lived appear in the 7 pages that reached the printed word. [In Mary’s book Town Bred, Country Nurtured]
In fact when I came to consult my 1942 diary, full pages, each crammed with 20 lines of closely written script, I realised that I did a great deal more than dig docks during my stay …

I was broken in gently with a day in the farmyard. First I groomed the vet’s horse, then put Jane into the shafts of the pony cart and took loads of marigolds and silage to the milking herd, marigolds and swedes to the heifers and kale to the sheep. Then sacks of seed oats up the hill to the drill for sowing.

I fetched the bull in with the cows for milking, washed their udders, got the first squeeze and then learned how the udder units fitted. After finding out what I could about the milking machines and diary equipment, my record says ‘fed calves, etc, and went to the cottage to unpack’ so at least I wasn’t in a hostel.

Day two, after grooming, I helped dismantle lambing pens, bagged oats in a granary, mucked out the calf pen, swilled won and watered calves, joined in a mouse hunt and hovered round the afternoon milking.

Monday 6 April 1942
On the morning of April 6th I was introduced to the dock-digging which was to become my bête noir. All credit to him, Mr Savoury, the boss, came to show us how.

Mary wrote the following poem, The Victors (By a despondent dock puller), which describes perfectly her battle with the dreaded dock plants:

Wednesday 22 April 1942
In the afternoon I was sent up to the hill top with a light-weight wheelbarrow, not for docks but for rocks. These chalky downs, as always, threw up plenty of intractable silica in the form of flints, when ploughed, these fouling the cultivators, harrows and drills used subsequently. My job was to gather up as many as I could and trundle them to the edge of the hill-top wood where they would prove no obstruction in the ensuing wheat crop. It was hard work but commanded a fine view. No doubt, I would have got as browned off with this as with dock digging had it come my way more often. 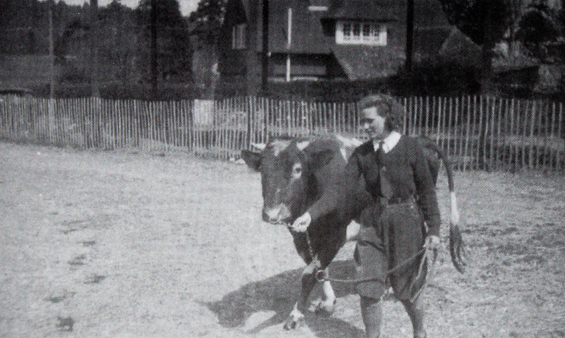 Late April 1942
In a heart-to-heart with the boss, Mr Savoury, he suggested that I look around for another job as ‘more suited to the administrative side’ than the otherwise inevitable miles and miles of hoeing in hot weather’ that would be my lot in the months to come. Whether I had ever complained to him about dock digging is not recorded but he knew I was busy with my correspondence course in agriculture and keeping nature diaries …

… father took a photo of me in my best-Sunday-go-to-meeting-WLA-uniform, which I seldom wore for work, leading the bull. This photo has remained with neither date nor place in the caption in father’s album. Odd that the taking of the shot was recorded in the diary, leading to the solving of a 60-year-old problem.

Wednesday 6 May 1942
… I was phoning the gentle Mrs Faulkner of Temple Grove, Shurlock Row …

Thursday 7 May 1942
I visited Temple Grove on May 7th and clinched the job on her small holding. This was to be my future posting …  was shown around the garden and small holding of the city businessman, Faulkner by name … lunch on the lawn and cosy chat with Mrs F.

She took me round the small holding, Jersey cows and heifers, calves, Wessex saddleback sow, fowl, sugar beet, kale, potatoes, marigolds, and general veg garden. There would also be butter and cheese making and a little pony work.

The boy at present there was leaving and I would be In sole charge. We crossed a field to my probable cottage billet with Mrs Millard. Mrs Faulkner owned up to her 60 years but said she did all the work in the flower garden herself. Her husband, stocky, dark-haired, came in from the city, complete with bowler hat and, ‘after getting to know me’ took me into Twyford by car, the deal clinched.
Having cast the dye at Streatley there was no need for a week’s notice so I just helped around until it was time to go on the Saturday.

Saturday 9 May 1942
… took luggage on train to Mr Faulkner at Twyford, then continued on home to Ealing for a week.

Some of the farm chores Mary completed during her brief period on this property were: pulling swedes by hand, trimming off leaves and roots with an old bread knife; mucking out stables; carting off loads of dung; carting trusses of hay, crushing oats and bran; bagging chaff; collecting fuel and lighting the copper fire to cook the hen food; cleaning the hen houses; moving glass cloches; collecting pig swill; painting cows’ stalls with preserving oil; and, of course, the much-hated dock digging!