Nordvaer expected almost any time from May 1st to take Kath and I off. Heard that it had left Mahe on 1st and it usually takes two days so ready for 3rd. Couldn’t be later than 4th, but it actually arrived on the 5th. She appeared white and ghostly out of the dense pall of rain. Harry put a sack over my suitcase with the cameras in and we left the rest of the unloading for later ,walking into reception committee outside the guesthouse, me sublime in sodden straw hat, sleeveless wet shirt and rat chewed skirt,

All ready to hop aboard but had only half loaded the timber by evening tide. Told we could stay ashore and go aboard at the crack of dawn, but a lot of cargo yet. Men at work at 5.00a.m. but only one load of timbre off by 7.20a.m. when the tide became too low.

Raining at last breakfast so took chair into tent and used floor as table. Rowland present to take first sips from hot chocolate. My parting words “Take care of yourself; you’re a very precious little bird”. He strained his neck upwards, peering at me with two bright beady brown eyes, the sort worn by all the best teddy bears and I could have sworn he understood. But I was equally sure that he would not take the slightest bit of notice. That long questing nose would be thrust into anything new that came within his pen regardless of potential danger. It would tackle the most fearsome centipedes and cockroaches  and trot into every strange nook and cranny that offered. I wished it luck – let us hope not the last of its kind… 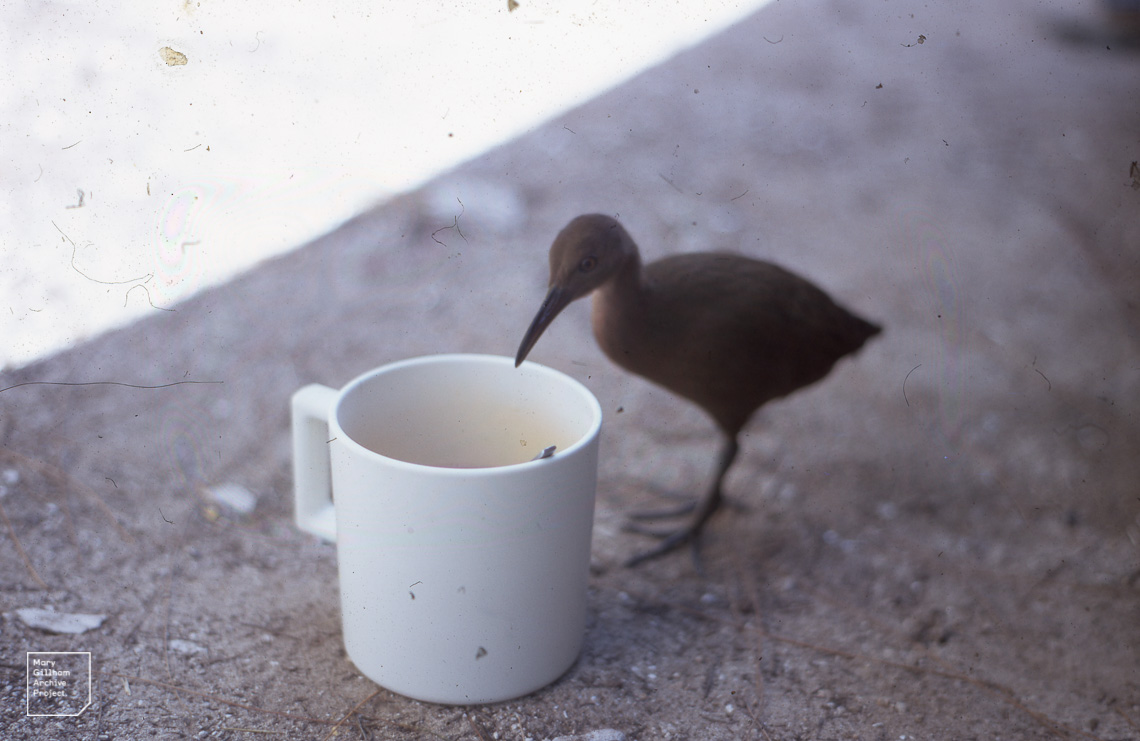 6 of 15 labourers coming to be in field with June survey party should have arrived but didn’t – so no chance of getting shelters built at camp sites and boys will have to waste several weeks...

Six Cambridge geographers and solar still man will come on the Nordvaers return trip in May. A Cambridge girl in June doing geo-physics – magnetism of different strata below bed of lagoon. She’ll have Derek’s room to herself as he’s going in June. South east gales all week, very rough sea. A little less by waiting but still brisk – comfortable temperature in sun. 6.00am on 6th – Elly in kitchen buttoned up in a big gabardine coat, “It very cold this morning,” Me nicely fresh in bikini. Themomoeter said 80F .

My last day, when the land giants took to the sea, followed by the sea giants; turtles, possibly sharks, porpoises and rays too. After they’d offloaded the next load of timber Kath and I, Alan and George got in the prioque – filthy inside (tortoise urine) and went aboard Nordvaer – up the rope ladder. We were away by ten past seven, by which time I'd already been sick. Kath determind to stay flat on her back the whole time and eat nothing, so went straight to bed.

Mombasa on 8th of May

So busy writing at 4.30pm that I didn't look out through porthole to see that we were running alongside low green cliffs, with westering sun blazing over their tops. Oustide on deck, visited toroises under awning. Would like to see them offloaded but won't get a birth until morning and we went ashore in customs boat.

On shore a blue and white football team (all Asians), so like Cardiff - chanting turns to sound of trumpets and wooden rattles - dancing and waving cola bottles. Must just have won a match. In customs shed asked for firearms and big game trophies.

Saturday 9th of May.

Raining. "May, the best month of the year" I said scathingly to Kath. I suppose I had been told this but then landing in this grey concrete expanse and grey rainy skies. And then we drove out into the western suburbs, apple trees were heavy with the pink tinged promise of harvest. "Things only started growing a week ago", said my parents. but what a week it had been! No one could feel more enthusiatic about the untouched wilderness than me - more ready to champion its cause - but I looked upon the green lawns sweeping down to the Thames - the strategically placed cedars and birches and apprecited that "One is closer to God's heartin a garden, than anywhere else on Earth." I picked primorose - violet - milkmaid rosegay. Beeches showering pollen from tassel catkins, pigeons moulted feathers. These plants cjoicer than Aldabra's. Man, indeed, chooses the mor e hospitably pleasant places to settle. Aldabra hits the headlines while we take the primroses and soft spring beeches for granted. While we are busy cnservingthe far off places for the benefit of the few with the money, Linblad Explorer types, or professionals - let us not forget what is on our doorstep and available for the replenishment nd fufillment of ordainry man - if we will be vigilant enough not to let it slip through our fingers in the face of other pressures. There are degrees of wilderness to be preserved, each as important in it's own way as the other. Tortoises are treasures but primroses are precious.