Night before Galatea Sunday – great celebrations and singing, I listened from 12.00 to 2.00am, I don’t know how much more (it carried on)? Caterwauling is the most appropriate word and yet not unmusical. Lots of harmonising, penyllion fashion. Different from anything I have ever heard and I wished for a tape recorder.

A yell went up coincidentally with church bells at 7.45 am. Sunday 26th of April. The Captain is an old friend of Lushes. Island men running Union Jack up and down flag pole until finally right. Radio could be heard calling us from ship but they couldn’t hear our reply. Too close! George and Alan left breakfast to go out in a boat and tell them to get off the air as they were blocking regular channel and there would be trouble. But the usual engine trouble and boat turned back.

Left till tide should be low enough for boats. Helicopter to land on a sand bank – as too many trees on land, so sometime after 10 a.m. and it will be a very short flight. She had been out a year on her way back from Singapore to GB. Most go round the Cape and pass south of this – nearer Farqaur. But these courtesy calls by the navy on British Island outposts are a regular thing and they will stay and do a job if there’s something you want done, e.g. build at jetty somewhere.

As the tide went down George and Jan went down to sandbank. The helicopter took off, prospected and decided it preferred the narrow strip of coral rock outside the dining room, wet sand is for takeoff. Dry they don’t like because they suck it up in clouds. Enormous whirlwind, I raced out at the noise and closed in for a photo with bits of sea grass whirling around me. The nicest coolest breeze of very humid spell. Chief Steward came in with Captain on that first run and his first words were “Rather you than me! I could never survive this heat and humidity.” They’re air conditioned otherwise they’d would get impossibly hot.  HMS Galatea is a frigate (corvettes are now done away with). All wore thick flying suits with orange life jackets, for survival rather than exposure, though no doubt its chilly up there at that speed with no walls or doors. Their pockets are full of knives and useful tools, and they keep drinking water on their legs. “If we have a forced landing wait till the ‘choppers’ stop, then get out and move steadily” – if you could in all that clutter.

The chopper was in and out all a.m. with buffet lunch and personnel – we decided to eat ashore as Jan would have to fly out as she wouldn’t go up vertical ladders and they have no stairway as Lindblad does.

The whole village came out to watch. Very few planes pass and these are very high. Great thrill. Arkon asked if a boatload of Seychellois could go out and look over frigate in the afternoon and they said yes. From 10am -12pm various navy personnel being shown round island settlement. Only one islander had ever seen a helicopter before (ex-army type and Americans have one on Mahe). Jo cook boys eyes nearly out popped out of his head when he saw it coming. Eyes riveted, he walked through dining room to patio. Then it stopped and hovered, prior to dropping down right in front of him and they almost came out on stalks. He continued to walk forward forgetting there were 2 steps down to the beach. The whole island came out and sat waiting for ‘in and out’ sessions of chopper ferrying. Elly’s eyes came out on the same sort of stalk when he saw the 17lb/12oz turkey they had given us lying on the table. The size of a local chicken can be judged by the fact that they had 5 chickens for 7 people at Christmas and got up hungry.

Wonderful lunch flown in and prepared on our veranda by two tattooed stewards – both very little men compared with 5 officers – all of whom bar perhaps one must have been over six foot. One interested in sea bird, a booby had landed on their deck recently.

Vast selection of drinks, frozen jellied consommé with lemon and cucumber, tender slices of cold beef with salad (first lettuce for 2 1/2 months) spuds’ and mayonnaise. Strawberry ice cream and fresh fruit salad served in 2 huge hollowed out pineapples. They left us some Laxtons superb apples as well as the turkey. It’s been real plenty lately. A tin of ham and tinned pineapple slices for supper. 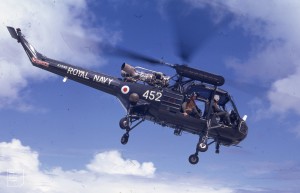 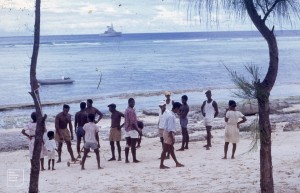 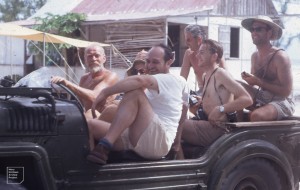 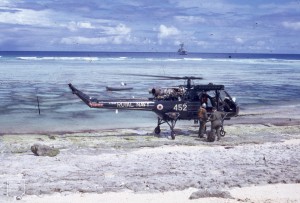 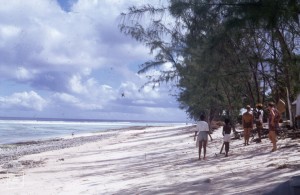 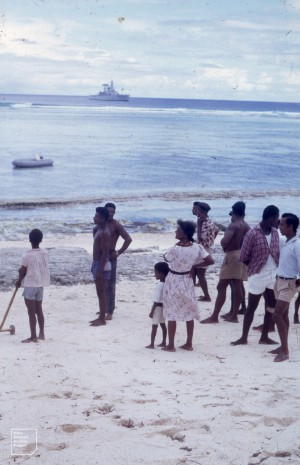