29th March 1970 - Nordvaer had made one of its seldom visits the week before, bringing luxuries of oranges, lemons, eggs, potatoes, 1 cabbage, a bottle of lime juice and some fruit juice. Our group was due a little holiday so all 6 of us decided to take Jack his mail at his camp on the other side of the atoll. Little Jo (14) our cook boy came too, the son of William, one of Jack’s local assistants. His elder brother didn’t want to miss out and came along for the day trip.

An uneventful trip at first, the two boys fishing. Little Jo got them all except one in the late afternoon and lost the best of all, a kingfish and his 21 shilling shoe and hook by not being strong enough to lift it over the stern.

Freak wave. Enormous. I saw it coming. A great wall of green water, white at the top but too late to shout to George to head into it. Hit us broadside on. Braced myself as it closed over my head. Jan on other side of boat swept off her seat and floundering on deck. Derek got busy with the pump.

Then a quiet two hours.

Low tide. Huge breakers. How on earth? Got in a bit too close. I saw a terrific comber coming at us broadside – 15ft from trough to crest and bellowed, ‘Look out George’. He saw it in time and we were almost headed into it when it hit us. Boat turned itself right over at one stage but righted itself – in spite of large outboard motor. Everyone soaked again trying to anchor. The big aluminium dory broke free.

She was a third full of water. A few more rollers and she was full to the gunwales. A 5 gallon red petrol tank had taken off on its own, 1 flip flop, a jar of tools, paddles and a length of rope along with it. Nothing to bale with but a mug which was absurd for that amount of water. Then I thought of the big lidded Tupperware bowl, an erstwhile bread bin and a picnic box.

Derek went to get in first. Everything swayed dangerously. I too have stood in an almost full boat trying to bale and know the sickening feeling as ones weight shifts an inch off centre. He finally got his sense of equilibrium and sloshed enough water over the side for 15st Alan to get in and help. Meanwhile George was wrestling with the anchor. Kath and I struggled with the wheel to keep her head on to the breakers, but much of them came inboard and she swung round beam so that we had to keep hauling. Finally anchor up and moved out into less broken water.

Meanwhile Jack, who balks at nothing, was swimming out. Every time one of those 12 or 15 footers rolled shoreward he disappeared but always bobbed up again, sometimes shooting up out of the seething cauldron like a porpoise. We saw that he was towing both paddles and a long untidy coil of orange rope. He reached the dory and nonchalantly passed them in board.

Things were quieter out here so we had lunch. Jan who is no swimmer confessed after to being in a mild panic, so I prepared the bread with Alan’s sheath knife, while he wrestled with tins of marg, meat and cheese.

We ate and drank, Jack taking only apple pie and lemonade, ‘I don’t want too much inside, if I’m going to be swimming back. Little did he know…

Jack decided to drift in in the dory on a tow rope as near as possible, with Alan as companion to see her back.  I dragged the cardboard box of stores from the cabin, just as much as I could lift. This wasn’t going to float like the petrol can. “There were some things for you in the boat Jack”.

The red petrol tank was coming our way. George and I uncoiled yards of rope and Jack went back in the sea with one end of it. He managed to tie it on and we hauled it in. Alan and Jack got aboard the dory again with paddles and luggage.

“Look out!” Both boats rose to it and the hindermost recoiled and rammed us hard in the stern with her pointed metal bow. “We’ll swing round and tow you in as close as we dare.”

But we’d scarcely got started, when the next mountain of water caused us to part company. A terrific snap and the rope had gone again. The men were still aboard when the little boat came out of this maelstrom but they had nothing to bail with.

I saw both go over board and it was a long time before the second head appeared.

The boat, unmanned took a complete turn on the next wave, turned over and did not right herself. There was very little to hang on to on her smooth bottom but the two stayed close by her for about half an hour while we did our best to go to their sustenance. I lost count of the attempts made with the anchor in that time. George decided to back in and float a line inshore with an inflated life jacket on the end. 3 life jackets were tried, none of the automatic inflators worked. One had to be blown up by the mouth piece.

Derek let it over the stern, then bawled the message that it had got caught in the propeller. George tied rope round his middle, secured it to a stanchion (not trusting any of us with the other end) and went over with Alan’s sheath knife. “Four times round the propeller blades and as many round itself” he said after.

I was dying to swim in with it, not quite realising how long ago it was that I was president of swimming and rowing in my university days but George stipulated 'No one else over the side; 2 is quite enough' asking at intervals ion his toil 'Are they both still there?' It is hard to be the man responsible.

By this time the two in the water had decided we were being no help at all and took the law into their own hands. I saw Jack floursihing an anchor and Alan a long length of orange rope and realised their upturned boat was getting further and further from our reach and nearer the shore. In the shallows I saw them lean on her gunwales in unison and got her the right way up, appearing spamodically above the surface as she lollopped over a wall of water. One of the Seychelloise men came to their aid in the shallows and they got her onto the beach, tipped the water out and took her upshore. Before walking off up to the camp abput of arm waving indicated that jack would bring Alan back across the lagoon

Somewhere on that bit of sea floor, way below low tide mark is a feast for the fish and crabs - irretrievable. 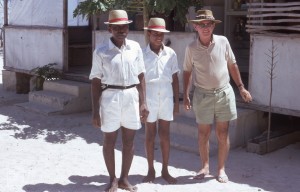 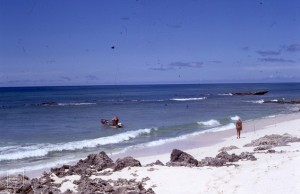 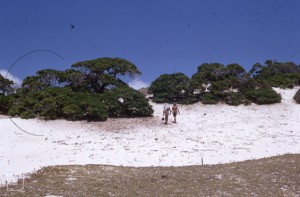 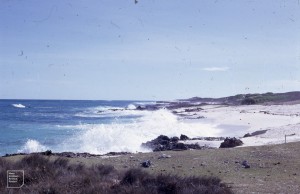 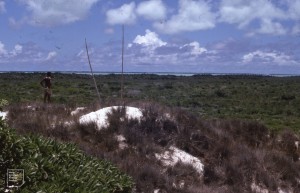