I was to share the old hospital hut with Jack Frazier who, as anticipated, spent most of his time away in camp, with the giant tortoises that were the focus of his studies. As first-comer, he had the seaward, breezier end of the timber building but, in his continued absence, I sneaked in there occasionally to work at his trestle table…it was to be several weeks before I was to meet Jack, who wore nothing but the briefest of shorts and was as far from white as any of the Creoles.

My room contained bed, table, chest of drawers, chair, washstand and bookshelves. I strung a piece of rope across one corner as a wardrobe and wished that I had thought to bring a little hand mirror.

The quarters were shared with a colony of mud wasps which had constructed its housing estate of mud cubicles along the wall – daub without wattle. Sand crabs, with bodies two inches across, solemnly climbed the steps to explore my room, looking belligerently defiant when I questioned their intentions. 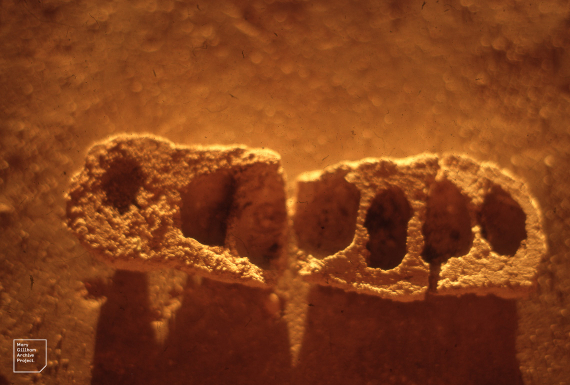 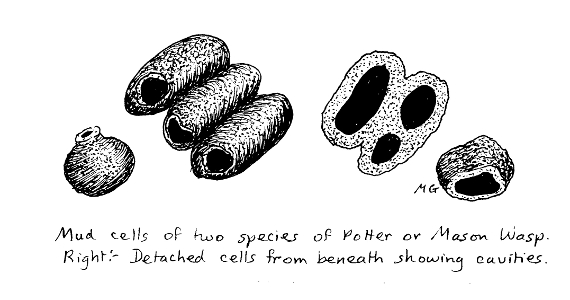 Giant tortoises, too, are all they’re cracked up to be, but an awful job to keep them out of the tents, as they make for the any shade they can find in the heat of the day.

One has to be very careful not to leave food about, as great armies of hermit crabs (the ones that live in borrowed shells) descend on it and make short work of the plastic or canvas coverings. The big coconut crabs can open corned beef tins with ease, much less of a problem than a coconut, which they even climb trees to pluck.

After dumping my hand luggage and casting an eye over the frugal furnishings that were to serve me for the next few months, a convivial aroma of coffee drew me to the cookhouse, where new companions and old were making the most of a rare meeting. Close by, just clear of the inflammable Casuarina trash, was a cigarette lighting bonfire of fibrous coconut husks, with a supply of fine twigs whose glowing ends were used as tapers.

Daily routine at base is rise with the lark at 5.00am. Coffee in dining hut at 5.30am, then off for the best 2 ½ hours of the day, when one does all the more energetic walks, wades and scrambles. Breakfast at 8.00am, lunch 11.30am, tea at 3.00pm, only I don’t bother as there’s no real milk or lemon. Dinner at 6.30pm to dusk and glorious sunsets over the sea. Night full of noises, clatter of dead palm fronds, soughing of Casuarina boughs, flapping canvas, squeaking poles, insects ticking like grandfather clocks, zingin mosquitoes, odd wader calls, fruit bat squeaks and crab rustlings.

Food is very dull because stores were due in January and won’t be coming until 23rd of March, so its iron rations...

The Royals Society’s warning about ‘sharks; no bathing’ was all poppycock. A bath in luke-warm sea is an almost daily ritual as we have no shower or bath, water being carried from big rain water tanks.

Although we take life easily when at base, we keep on keeping on when out for the day. As we’re usually at sea or in the lagoon there’s a breeze, or else we’re wading and pushing the boat. Lots of small inquisitive sharks 4 feet long in the lagoon, but they beetle off when you kick them. 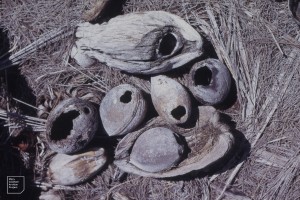 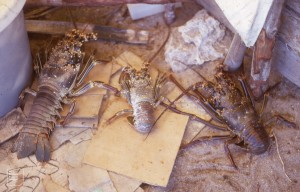 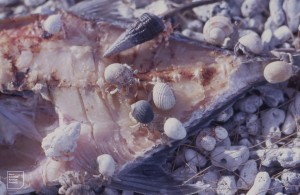 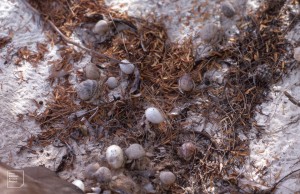 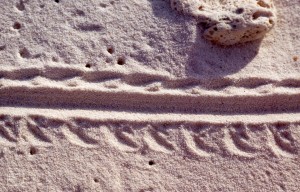 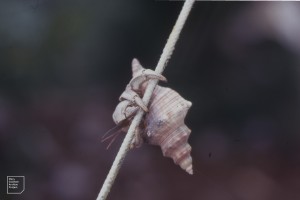 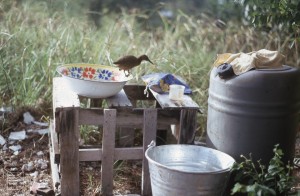