Mrs Du Plooy and Mr. Pullen, from Somerset West, were giving me a lift to Johannesburg - having advertised for a chaperone, being young and obviously fond of each other.

... Out to the north through the magnificent Du Toits Kloof where white clouds played on the mountains, the weekend's rain left beyond the Cape flats, still drenching Cape Town. Previously manganese and silver were mined from the fissures of the Du Toit Mountains.

Fine views back to Wellington and forward into grape country and beyond Worcester.

The beautiful Hex River Valley, through which we passed, contained the highest priced land in South Africa but only the land on the lower side of the road was cultivated and planted with vines, there being no water on the upper side or south.

Through the Hex Pass to Touws River where we entered the Karoo. Semi-desert - 200 miles of Karoo Bush scrub before passing into the grass zone to the east.

Laingsburg to Beaufort was sand and stones with only occasional bushes, the land getting gradually drier away from the cape - the only area of winter rainfall. The famous Karoo bush was grey like sage.

Mimosa thorn or Acacia Karoo was dominating the valleys as we reached our elevenses stop at Laingsburg. Here we bought hot meat pie and crisps for lunch as we travelled. Two stops to photograph the 5 inch rainfall vegetation which was principally low cushions slightly shrubbier growths of Mesembryanthemum giving way to dead Karoo bush and nothing on the stony kopjies.

We crossed the Dwyka River which has not flowed for fifteen years, but which contained a few puddles still. The eroded mountains to the south put me in mind of the McDonnel Range of Central Australia while others were typical desert mesas. The roadside was bright with yellow and purple daisies, yellow and pink Mesembryanthemum and mauve iris, later identified in Pretoria as Moraea polystachya – the Karoo iris which is poisonous to sheep cattle and horses.

Beyond Beaufort West some of the stones gave way to sand, which was more fertile. There were thorn trees and furrows had been opened and rows of Opuntia seedlings planted for cattle fodder planted.

Photos of the triplet mesas - the spectacular 'Three Sisters'

The car radio was turned on and we listened to the Lord's Prayer and other sacred songs as we rolled through the sunset, past the quietly grazing springbok - a moment when the amenities of civilisation can add to the atmosphere rather than detract from it.

Into Bloemfontein at 1:15 p.m. where we spent half an hour. Not a very prepossessing town, but we failed to see some of the nicer buildings which Pullen later showed photos of. This city is the judicial capital of the Union of South Africa and capital of the Orange Free State, very Afrikaans and that chosen for the 50 years' celebrations ... Walked round and took a few photos of the much decorated station.

Saw a secretary bird and several vleis near the great new town of Welkom full of coots and flamingos, stilts and what was probably a darter or snake bird.

10 years ago, before gold was discovered there, Welkom was open veldt - now it was well advanced towards being a Johannesburg of the future. Long-sighted planning, wide streets, huge buildings and plantations of pines and double rows of pines lining entry roads. Vleis had been enlarged and a vast area built up.

Road rule in the Free State is that one is fined £5 for each wheel on the tarmac when parked.

A long stretch of dusty road near sunset caused us to light up prematurely to see through the white dust clouds but most of this main route was tarmac.

Across the grass of the high veldt via Vredefort to Parys where we decided to halt for the night. (The stretch into Johannesburg from the south was not safe to travel after dark as locals stoned cars). We found the Riviera Hotel on the River Vaal, settled in and strolled by the moonlit river.

We crossed into Transvaal at the Great Barrage, 25 miles from Parys, where a huge dam was held back, one sluice gate open to let water through. This high ground in the Transvaal has a lot of fountains and meandering streams of fresh water which don't occur further east, except in the 10 to 15 mile wide coastal strip. This is the savannah or high grass veldt. The Barrage was the work of the Rand Water Board. Coots frequented the reedy lake above, cormorants the guano-covered rocks below.

There was a scramble for breakfast and I wasn't ready when the three nurses, who were coming to my talk to the schools, came to collect me. After arrival at the Brooklyn School, 4 miles out, the muddle-headed acting principal took about an hour to organise the projector and children etc. So long that, in the middle of my one hour session to Standards 3, 4 and 5 (ages 8 - 12) we had to leave off for playtime. I gave a shorter session after for the littlies - and was now requested to prolong this. Both age groups seem to like the pictures, judging by the "Oohs" and "Ahs"- my first experience of under elevens and a most enjoyable one. Quite apart from which I emerged £8.4. the richer. I tried to stick to the syllabus - modifications of beaks and feet to the function in hand and also let myself go on streamlining for life i n the water - as exemplified by penguins and seals - with examples from fish etc... Plus a few icebreakers. Refused to be interviewed by a reporter during the five minutes break to rest my voice, but she had got some notes from her short session at the talk and produced the enclosed.

Awoke to a sunny morning with white mist drifting through the Drakensburg valleys and sallied forth into the heavy dew to admire the superb view.

After breakfast Vera took me walking round the indigenous evergreen forest where I added five species of fern to my collection, even without the maidenhair which had previously grown here in profusion before the area started drying up. Vera said she had never seen the forest so dry and the ferns so withered or the streams so empty. The evergreen trees were draped with "monkey vines", some bore "monkey apples" and the indigenous monkeys emerged on Sundays, when the locals were off duty to clear up their porridge. ... During the latter part of the morning we drove to Groot Letaba on Ebenezer dam ... After lunch Peter gave me a yachting lesson on the Flying Dutchman. A horrifying set of instructions from Trevor as to what I should and should not do on the trapeze etc. first and though it proved much less horrific than this there was plenty of excitement. There were tricky gusts sweeping down the valleys from all directions ... There were no mishaps, however ... Among other attractions of the newly rising lake  were motor boats, dinghies, water skiing, bathing and trout fishing (the water having been newly stocked.) In the near vicinity one could play tennis, ride horses or just lie in the sun.

Up at 3:30 a.m. after only four and a half hours sleep, but it was an hour before my four young Kruger companions could be mobilised ... We left at 4:30 in rain and mist, leaving this behind as we left the mountains and dropped to the bush veldt, but the day remained more or less cloudy. It was 90 miles to the nearest gate into the 8000 square mile game reserve (200 x 40 miles). The reserve stretched from the Crocodile River in the south to the Limpopo River in the north and was bounded to the east by Mozambique and on the north by Rhodesia.

About 20 miles outside the park a small herd of kudu bounded past in the half light, with magnificent spirally twisted horns and white scuts upthrust.

... We reached the gate at 6:50 a.m. with the first light and after a few formalities and payment of 10/- each and 5/- a day for the car, were on our way at c15 miles per hour, eyes glued to the bush and Diana at the wheel almost following her gaze into it. Her insatiable youthful curiosity drew up many prohibited sidetracks and took us for short sallies outside the vehicle when more responsible minds were thinking of the possible £50 fine such action might bring. At first we saw only birds: fork-tailed drongo, “sucker bullers” or sugar birds, Swainson’s francolins, turtle doves, ring-neck doves, guinea fowl, large hawks and hornbills. These latter were common throughout the park.

Just after passing an old impala buck with his harem and offspring, we came across a couple of lions, male and female, resting in the long grass beside the road with not much more than their heads visible. We had seen little traffic all day, but here ten cars had congregated and the occupants of most had alighted to get a better view, or were standing on car roofs or bonnets. The lions stared back unconcernedly, possible a little contemptuous of this excitement, jabbering mass of clambering humans - not so very different in their eyes from a troop of baboons. And then a lorry came in sight - obviously something official. Never have I seen so many move so fast. In a twinkling of an eyelid everyone was back in their car looking as though butter wouldn't melt in their mouths and how we five managed to get in through two doors in the right order is a mystery yet! (Diana bruised her bare feet jumping off the roof!) It was quite obvious that game wardens were the most dangerous animals in the reserve.

One of my bad days today, spent mainly in a garage waiting for a lift north as buses were few and far between. I was given an armchair within and was able to read and write … Lorna came and rescued me at lunch time and returned me after, but nothing eventuated 'til 5 p.m. and this was just the garage man opposite who had promised me a lift to Louis Trichard had backed out and suggested I book in at a hotel and he'd pick me up later if he decided to go! I eventually went with three black-garbed Afrikaner missionaries who functioned about 40 miles from Louis.

The Louis Hotel boy brought my morning coffee at 3:45am and I caught the northern bus outside at 4:40 a.m.. Saw the spectacular Zoutspanberg Range (Salt-pan Mountains) only by moonlight - the deficiency remedied five weeks later on the way back. A recent fall had blocked the road and they were now building a tunnel, by floodlight - the greater pity as it would eliminate the most spectacular part of the gorge. Customs at Beitbridge started functioning at 6 a.m. and we were there by 6:15 in and orange dawn. I had forgotten this was not just another hop on the journey and my passport was packed deep in my luggage. Only when I saw two Rhodesian pennies with holes in did I realise that I should need to change currency - but a chap in the immigration queue changed £5 for me and I found Southern Rhodesia as far as Bulawayo quite prepared to accept South African silver. Eventually we were through the South African formalities, I repacked my passport and half an mile further on - on the other side of the "Great, grey-green, greasy Limpopo" - which had relatively little water at this point - I found we had to repeat formalities for the benefit of the Rhodesian authorities. We changed buses, to one with a local driver, proceeded 100 yards and then tumbled out again for breakfast, this time at Beitbridge Motel - sight of my first and last meals in Rhodesia. 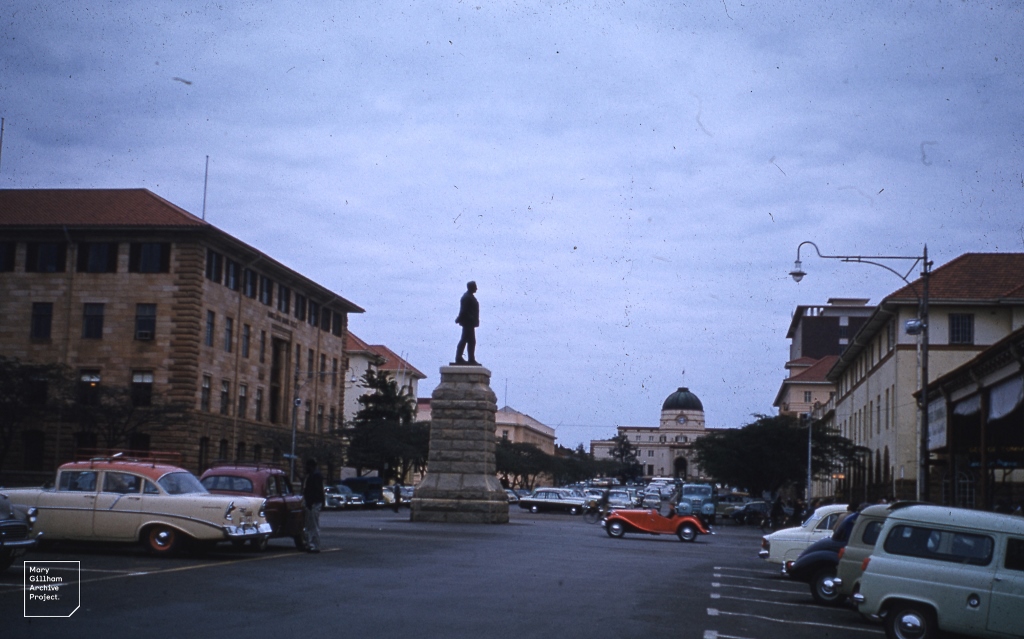